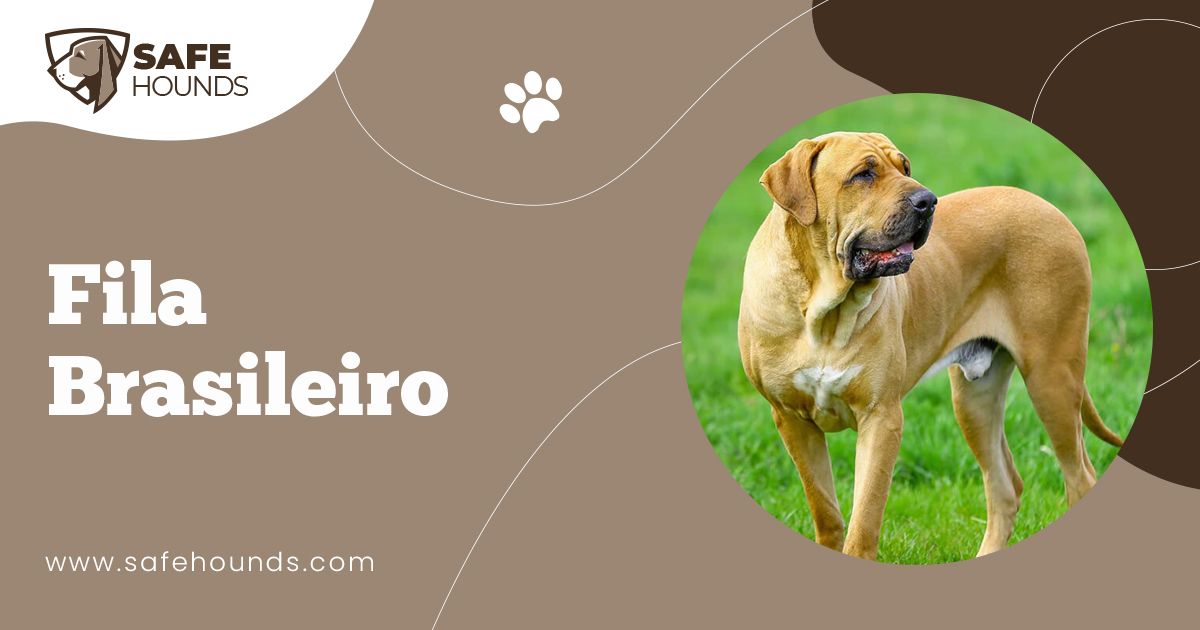 Most dog breeds trot. Not a Fila Brasileiro! This breed has a distinctive gait that has a rocking and rolling motion that is not unlike the swaying pace of a camel. This kind of gait is distinctive to the breed. The legs of the dog on each side move back and forth simultaneously. This allows the dog to instantly change direction. Aside from this unique trait the Fila Brasileiro is known for its ferociousness. A Fila Brasileiro is very friendly to the family but this breed is known for its aversion to strangers. The Fila Brasileiro needs extensive introduction before the dog would warm up to strangers and some dog would never accept strangers at all. The aggressiveness of the breed is in fact encouraged. Unlike other breeds, the Fila will not be disqualified for the show ring for showing aggression. Judges are merely warned not to touch the dog if they want to avoid being bitten or if they want to keep all their fingers. These dogs have to pass a temperament test. The test is usually given to 12 month old dogs. In a shooting test, a blank pistol will be fired several meters away from the dog. In another test the dog will be aggressively approached with a stick. In both cases, the Fila Brasileiro is expected to be alert and to show self confidence and assurance. On the show ring, the dogs aggression towards strangers as well as the self assurance will be noted by the judges.

The Fila Brasileiro is not only popular in Brazil, the breeds country of origin but it is a most loved and valued dog. The breed is in fact the national dog of Brazil. However, this breed is relatively unknown in other dog loving countries. This breed has just been recently introduced to USA but popularity wise, this breed is gaining grounds in this country. Undoubtedly, A Fila Brasileiro would be an unrivaled guardian of property. Fila ownership however, should not be a spur of the moment decision, not a decision that is borne out of wanting to have a macho image. This breed is not for everyone especially for a person who would only want to own this dog so that he will have a ferocious and intimidating dog to parade in the park. In any case ownership of the Fila is restricted in some countries. In Israel, United Kingdom and in Brisbane, Australia, prospective owners need to secure specific court exemptions.

The Fila Brasileiro is a dog with rectangular structure. With the loosely hanging skin, the long muzzle not to mention the excellent tracking ability it is very apparent that this breed has the blood of Bloodhounds flowing on its veins. Dog experts claim that the Fila also have mastiff blood due to the heavy muzzle with overlapping and hanging upper lips. A Filas head is massive but it is proportionate to the rectangular compact body. The broad black nose has well developed nostrils. The almond shaped eyes are wide set. Eye color can be dark brown to yellow but always takes the color of the coat. Large pendant ears are thick, broad at the base and tapers to rounded tips. The ears may hang closely to the cheeks or may be folded back so that the interior of the ears can be seen. The tail is thick at the base and tapers rapidly. When the dog is alert the tail is raised high but not curled over the back.

The skin is the most distinctive characteristic of the breed. The entire body is covered with thick loose skin. Loose skin on the neck forms pronounced dewlaps. In some individuals the loose skin extends to the chest and abdomen. Skin folds at the withers may run down and extend to the shoulders. Some dogs may have folds at the sides of the head although at rest the dogs head would be wrinkle free. When the dog is alert, the contraction of the skin on the head forms wrinkles. The Fila Brasileiro has a short dense coat that lies smoothly to the skin. The coat can be of any color though mouse gray and white is not accepted by the breed standard. The most common coat color is black, fawn and brindle. Some individuals have black masks.

The Fila Brasileiro is a powerful dog it has to be to excel in cattle herding, hunting and to be a dependable estate guardian. Faithful as a Fila is a Brazilian saying that shows how much the people value the legendary loyalty of this breed. The agility of this breed belies its large appearance. If necessary a Fila will scale a six foot fence to defend the master, his family or his property. Like its loyalty the protectiveness of the dog is also legendary. The protective nature of this dog is inherent. Owners need not train the dog to defend the family. This trait of the Fila Brasileiro is called Ojeriza.

This breed may have an intimidating appearance and a ferocious and aggressive behavior towards strangers but the dog is known to be gentle and docile with the family it has come to recognize as its own. This breed loves children so much and would bear up to the teasing and the rough treatment dished out by the children. If you have a Fila in your home you will not only have an able and dependable guard dog but you will also have a wonderful pet, one that bonds strongly with the members of the family and one that bonds with the other pets in the household too.

The Fila is not a suitable pet for a first time dog owner. As mentioned, this breed will be gentle with the family but it would need a family who will understand the quirky nature of the Fila. The owner has to be dominant and must be able to show the dog that he is the leader of the pack. This breed is not for city life. A Fila Brasileiro need would freedom to roam and to run off leash. This breed would require vigorous exercise to work off its excess energies. A home in a suburban setting with a well fenced yard will be a most suitable living arrangement for the breed. Being a large breed, a Fila Brasileiro may appear to be an indolent couch potato. Actually, these dogs would need and would appreciate the opportunity for vigorous exercise.

The short coat of the Fila Brasilero is easy to maintain. This breed is also shown but the grooming routine consists of a weekly thorough brushing using a firm bristle brush. This breed will not need frequent bathing. The coat may be wiped with a damp cloth to remove dried up mud and dirt. Rub the coat with a dry chamois cloth for a gleaming finish.

The Fila Brasileiro ancestors were brought by the Portuguese conquistadores in Brazil during the 15th century. This breed though was speculated to have been developed in the 19th century by crossbreeding the mastiffs, the bullenbeisser stocks and the Bloodhounds. The scenthound was also added to the gene pool of the Fila. The keen sense of smell, the superior tracking ability and the loose skin was inherited by the Fila from the Bloodhound. The compact body, the courage as well as the alert disposition is the contribution of the mastiff. The hotheaded temperament that makes the dog hold on to the quarry until the hunter arrives is the legacy received from the Bulldog. The long muzzle, the pendulous folded ears as well as the not too pronounced stop are the physical features typical to a scenthound.

The Fila was created in response to the need of Brazilian hunter for a dog that will assist in mustering semi-wild cattle. The dog has to be tough and hardy as it will double up as guard dogs that will protect the ranchers family and property. True to the objective of the breeders the dog that was created is a ferocious and able hunter. The breed was used to hunt jaguars. The Fila became the dependable helper of the rancher in controlling livestock. During those times slavery is legal in Brazil. The dog was also used to track and return runaway slaves to their masters. Because of the Filas outstanding hunting ability it has found its way to North America and Europe. However because it has a legendary ferociousness, the breed is banned in some countries.