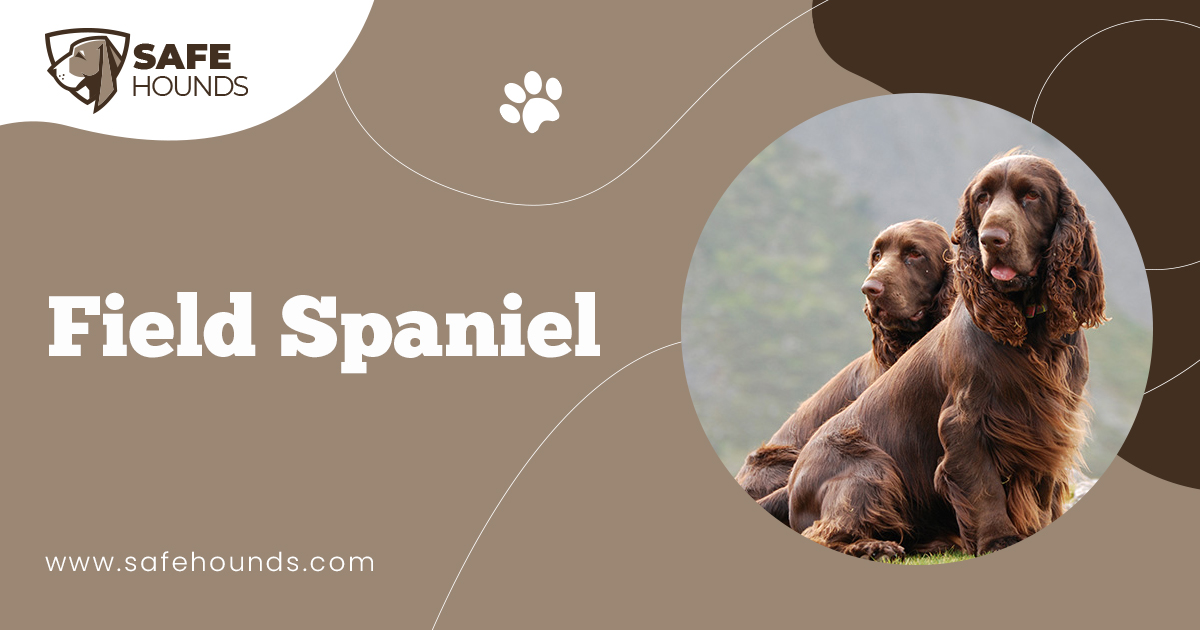 The Field Spaniel is a bit longer than its cousin the cocker so you will notice the difference right away. They have a very beautiful and shiny coat that can be wavy or straight. The color of the breed is usually solid or bi-colored, liver, golden liver, or black with occasional white on the chest. Their beautiful eyes are dark brown or hazel and shaped like an almond. They have a well-developed nose for scenting their birds they hunt in the bush. They are very muscular and athletic. It is your choice as to dock the tail or leave it naturally hanging.

The Field Spaniel usually gets along with other animals and children as long as the children do not get too rough with them while they are playing. They may become withdrawn if they are bothered too much by children. They should be treated gently and not hollered at either.

The training should be consistent and not over tiring because, they become bored with repetitive commands. They tend to pick one family member over another and stick to that one. They are not dogs to be kenneled and should have free run whether inside or out. These are not apartment dogs because they need exercise and need to have a run every day. They will be most content to live inside and play outside. A fenced in yard is ideal but keep a watch on them because they will follow a scent.

The Field Spaniel is a medium size dog unlike its cousin the Cocker Spaniel. They are heavier and have a longer body than its cousin. Their eyes are either dark brown or a hazel color. Their eyes are almond shape and large. Their eyes are may have a look of concern but also a look of gentleness as well. Their ears hang down on the side of their heads. Their muzzle is long and they have a well-developed nose that is great for scenting out birds. This breeds body is just as long as it is tall. The body is an athletic body and very muscular. With this breed of spaniel, their tail can be either docked or left the way it is.

Their coat is glossy, flat, or slightly wavy as well. Their fur is long and gives off a very beautiful look. The chest, ears, and legs of this breed has a reasonable quantity of feathery fur on them. The coloring of their fur can be a solid or bi-colored, liver (brown), golden liver, or black. This can also be consisted with roan and sometimes with white on its chest.

The Field Spaniel stands between 17 inches to 19 inches tall. They weigh anywhere from 37 pounds to 45 pounds. The Field Spaniel is again bigger than the regular Cocker Spaniel. There are several different breeds of Spaniels that they vary in size and shape. This breed however is a wonderful sized dog for anyone to have and was developed for hunting thus the medium size.

When training this breed of Spaniel, harsh training is not something you will want to do. This gentle and sensitive dog needs gentle training. They will learn better tasks that way. Harsh training could even push away the dog.

The Field Spaniel is a dog that will get along great with kids, cats, dogs, and is pretty good with strangers as well. Just a little time with a stranger and the dog becomes your friend. This Spaniel with its background of hunting loves to play and work. Giving this dog a task to do will keep this breed on its feet, keep him happy, and out of trouble. This dog needs attention just like any other dog.

This breed of dog is not recommended for apartment life. They need a large yard to run around in, but make sure to use a good fence to keep them in. With their hunting ability, they may take off after something that interests them. This dog does not like to be locked away in a kennel as they can become disturbed.

The Field Spaniel with its roots of hunting needs plenty of exercise. This dog will love to take long walks or run around in a large fenced in yard. They only need to be brushed about once or twice a week to keep out mats and burrs from when they are outside playing. If your Field Spaniel is being used as a show dog then they need be kept trimmed to keep them looking sharp for their show. Also, make sure to keep their ears cleaned and also trimmed of long hairs. This breed of dog is your average shedder. A bath is only needed when they appear to be dirty or give off a bad odor. Otherwise this breed is pretty easy to take care of and just like any other animal you may have, regular trips to the vet is normal.

When dog shows were first coming about is when the Field Spaniel was developed. At that time, the main reason to have a spaniel was for the show. Being an instant hit the field spaniel has great success and became one of the most popular breeds. Then some breeders wanted to get a better show dog so they bred them with bassets and Sussex spaniels, which led to the demise of the Field Spaniel, and genetic health problems arose from this merging of different breeds.

To preserve the Field Spaniel breeders went back, bred their dogs, and got back the original Field Spaniel much to everyones delight. Under the watchful eye of the English Kennel Club, the dogs were bred to English Springer Spaniels to increase the gene pool but the Field Spaniel still reigns and is more a show dog than the Springer or any other spaniel.

The Field Spaniels of today can be traced back to four of the most famous Spaniels in history in the 1950s. These are Colombina of Teffont, Elmbury Morwena of Rhiwlas, Gormac Teal, and Ronayne Regal. Therefore, if you have one you can almost guarantee that in the bloodline somewhere you have some of these beautiful spaniels.

These dogs are sure to snag your heart and if you do have one, chances are you will want another. Some people have four or more because they get along so well and are easy to take care of. If these dogs are used for hunting, chances are you already have more than two. Some have up to six and there are some places that have a lot of them and rent them out for hunting purposes.

These dogs love water so if you want to go for an afternoon swim he will be more than willing to join you. If you have your own pool, you may have a hard time keeping him out of it.