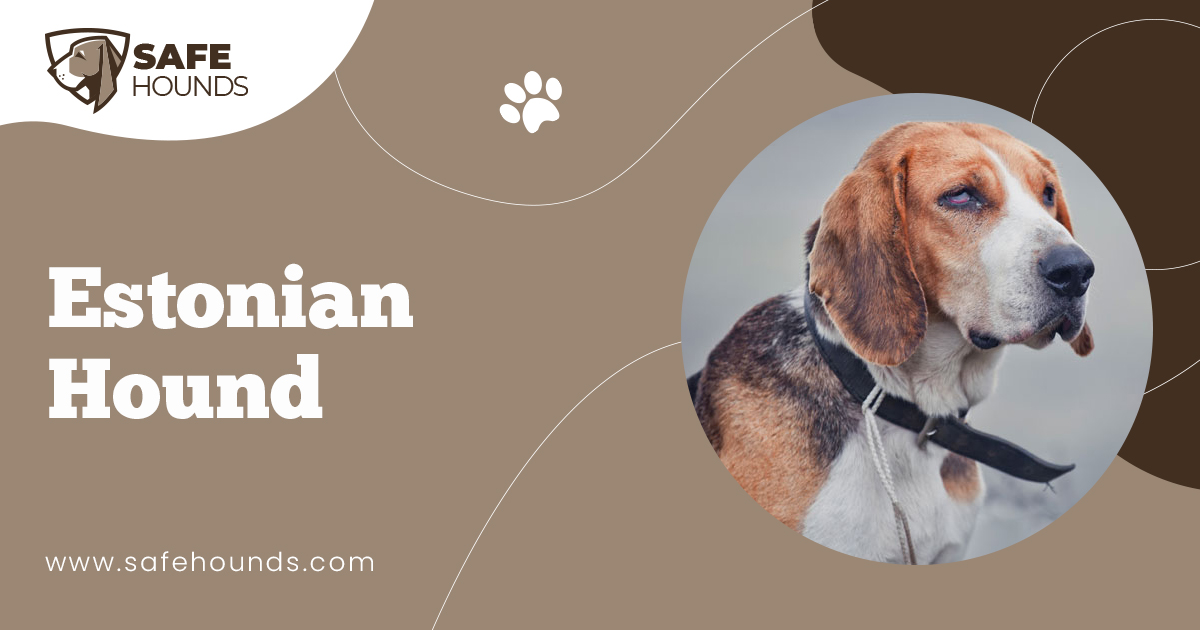 The Estonian Hound is a fairly young breed. This dog may not have the long and legendary histories of the ancient breeds but this medium sized dog is highly valued in Estonia, its country of origin. This breed resulted from the crossing of various breeds of foreign hounds with local hunting dogs. The Estonian Hound is more popularly known as Gontchaja Estonskaja in Estonia. The Gontchaja Estonskaja development was prompted by the ultimatum issued by the Soviet Unions Ministry of Agriculture and Economy in 1947. Every Soviet Republic was ordered to establish a local breed of hunting dog that should replace the large breeds of hunting dogs that are hunted in Estonia. These large hunting dogs were blamed for the rapid decline of wildlife population in Estonia, only dogs with a maximum height of 17 inches were allowed to hunt. The breed that was developed was the Estonian Hound, a very agile and hard driven breed that has enjoyed tremendous popularity after its creation. After the collapse of USSR, Estonia proclaimed its independence. Being the only breed developed in the country, the Estonian Hound was made the countrys national dog by the new government.

The Estonian Hound was developed to be a working breed. The well muscled and strongly boned structure of the breed exudes immense strength and endurance. This breed is indifferent to bad weather and would always be eager to work. The dog has a melodious voice that is not unpleasant to listen to. Apart from being endowed with exceptional hunting abilities, the Estonian Hound is a beautiful breed that is noted for its stable temperament and for a high level of intelligence.

The crossing of the Finnish Hounds with the local hounds of Estonia produced a breed that while small and lower stationed nevertheless has the working qualities of its forebears. The breed was developed to answer the need for a small dog that will excellently trail the game without causing the decimation of the wild goat population and the other wildlife in the Estonian forests. The Estonian Hound is a medium sized dog with a solid bone structure and a well developed muscular body. This breed has a moderately wide round head. Length of the straight muzzle is equal to the length of the skull. The stop is moderately defined. Clearly defined eyebrows are not high placed. Well fitting lips should be dry. An Estonian Hound commonly sports a black nose although specimens with yellow patches may have dark brown noses. Almond shaped dark brown eyes are made more impressive by dark eye lids. Estonian Hounds have thin long ears with rounded tips. Ears are set rather low and drooped against the cheeks. The ears are well covered with short hair. Strong white teeth meet in a scissor bite. The rounded muscular neck is smoothly covered with skin. Muscular back is straight and wide. The sloping loin is rather short but wide and muscular. The short croup is wide and muscular as well. Rounded wide and deep chest reach the level of the elbows. An Estonian Hound has an elastic skin but it is fairly tight so that no wrinkles are formed. This breed has a short coat that is rough, flat and shiny. The undercoat is rather weakly developed. The predominantly white base coat color has black, tan and yellow patches of varying sizes. These dogs always have white tipped tail.

An Estonian Hound is highly appreciated for its intelligence. This hunting breed has a high prey drive but having been trained not to hunt hooped animals, these dogs consider hares and foxes as their prey. This breed is noted for its stable and good natured temperament. This hunting dog also makes a wonderful addition to the family. This cheerful and happy breed is a suitable companion and playmate of the children. The dog is affectionate. It forms a strong bond with its people. Being an energetic breed, the dog would love to be in the forest to terrorize its prey but it equally loves to be idle to snuggle or to lie down on the feet of the master as it craves human attention. It would never be wise to leave this dog alone in the house for a long time as the good natured pet will turn into a destructive one. An Estonian Hound is a friendly breed. It tolerates other dogs well. Nevertheless, socialization will still be necessary so that the dog would be good with other animals and smaller pets as well. The friendly nature is only for the dogs favorite people. An Estonian Hound makes an excellent watchdog because it is naturally wary of strangers. This dog is not recommended for apartment living. A modest well fenced yard will ensure that the exercise requirements of the dog are met.

An Estonian Hound has a short coat that is shed moderately thus the dog would not need extensive maintenance. Owners of this dog will not be bothered by the need to have the pet professionally groomed. Occasional brushing with a firm bristled brush or rubbing with a chamois cloth would be enough to maintain the good condition and the sheen of the hair. Frequent bathing will not be necessary as well. An Estonian Hound is an energetic dog that is accustomed to roaming the forest. Owners that keep the dog solely as pets must provide the dog with at least an hour and a half of walking to let off pent up energies.

The Republic of Estonia, a country in the Baltic region is home of the Estonian Hound. This medium sized dog is the only breed developed in this country. As such the Estonian Hound is considered to be the countrys national breed. Estonia is a game rich country but until 1914, only Russian-Polish Hounds and English Fox Hounds were used by Estonian hunters. From these hounds, several local hounds were developed. The conformation and the working ability of these local hounds were influenced by the introduction of the Finnish Hound in the 1920s. These dogs were valued for their prowess of hunting hare and foxes. Unfortunately, these large and fast dogs have greatly decimated the wild goat population in Estonia. Hares and foxes are hunted in areas where wild goats are also plentiful. On July 1, 1934, the issuance of a law set in motion the development of the Estonian Hound. The law stipulates that no hunting dog higher than 17 inches (45 cm) must be hunted. The Estonian government has issued this law to prevent over hunting given that by 1934, game population has tremendously declined. Hunting in Estonia is well organized. Large hounds are not really necessary.

In 1947, the USSR Ministry of Economy decreed that every Soviet Republic should have a dog breed of its own. Hunters have begun the development of a small lower stationed breed of hound that would have the outstanding ability to track small game. Bern Hounds, Luzern Hounds, Swiss Hounds, Beagles and the local hounds of Estonia are the forebears of the Estonian Hound. At the onset of the breeding program, the smallest of the local hounds were crossed with English Beagles to produce a small dog but one with strong feet to be able to withstand the heavy snowfall in February. The Swiss Hounds were introduced purportedly to give the resulting breed a musical voice and the tenacity in tracking prey. Foxhounds were added for great staying power. The resulting breed meets all the expectations of the breeders. The breed was given the name Estonian Hound. The breed was introduced to the 2nd Soviet Cynological Congress in 1954. By December 27 of the same year, the breed standard was approved by the Main Government of National Parks and Hunting Economy of the Agriculture Ministry of the Soviet Union. The breed was well received not only in Estonia but also in other areas of Russia. The breed received a special award at the 1957 Moscow Exhibition. The breeders/founders were awarded gold medals as well. The breed standard was approved by the Estonian Kennel Union on July 4, 1998.

The Estonian Hound is a highly valued hunting breed in its country of origin. The dog was in fact depicted on the Estonian Kennel Unions coat of arms. This medium sized dog noted for its supple movements continuously gives voice while tracking rabbits, foxes, wolves and lynx until the prey is caught by the hunter. The Estonian Kennel Union is working to have the breed recognized by FCI.