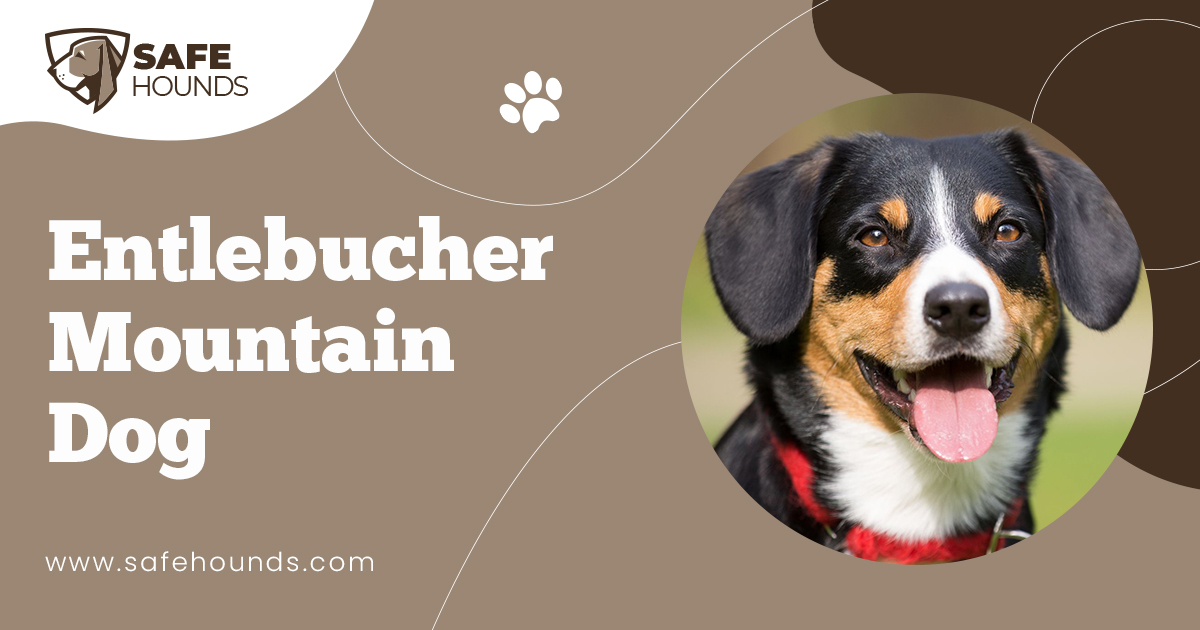 The Entlebucher like the other three tri-colored dogs are working dogs. Although relatively small, the Entlebucher has a compact well muscled body. The dog has the strength to pull carts containing cheese and other dairy products. This dog was also used by the sennen to drive the herd of cattle from the valleys to the pasture land in the Alps. Intelligence, agility and speed all rolled into one compact package is the apt description for the Entlebucher as aside from the docile cows, the dog can move and manage horses, hogs and other bigger animals.

This dog posses an enormous amount of energy and would love to be included in the activities of children. A young dog can be very rowdy and exuberant, they are known to bark, and chase and nip people, bikers, passersby, cars or just about anything that moves. If you own an Entle be ready for a dog that would jump at your face, be ready to be knocked down when the dog shoves its body against yours. Because Entles have boundless energies it would tirelessly play fetch ball and Frisbee, romp and roughhouse with the kids. These dogs have an unaccountable liking for heights. It would be pretty common to see an Entle climb tables, fences and their dog houses. The owner has to provide physical and mental stimulation for the dog otherwise the dog would be bored. Boredom is manifested through incessant barking and destructive chewing. A bored Entlebucher can easily destroy your garden in one day.

As an Entlebucher is primarily a working dog, it would love to be given a task to do. From being the active and energetic playmate of the kids Entles will be transformed into a serious worker that has the tenacity to stay until the given task is done. Entles are prized for their working abilities as working alone or working with the master these dogs posses self assurance and a commanding presence that makes them satisfactorily accomplish the task. Although specifically bred to be working dogs Entles are also known to be enthusiastic partners of the owner in canine athletic activities. These dogs excel in sports competition too.

Entles can be excellent watch dogs. The bark alone can deter an intruder. The dog is alert and vigilant and would always notify the human family of unfamiliar faces, visitors or otherwise. However, these dogs make poor guard dogs as they can be protective but they are not aggressive. They can be a bit suspicious but most of the time they are friendly even to strangers.

Entlebucher Mountain dog have the appearance of a typical working dog, compact, square shaped and well muscled. The wedge shaped head is harmoniously proportionate to the slightly elongated body. The small almond shaped dark brown eyes with black pigmented rims have an intelligent, alert and inquisitive expression. Some specimens have blue or yellow eyes but dark eyes are more preferred. The moderately sized triangular pendulous ears have a firm cartilage and a rounded tip. The ears that are set high on the dogs flat skull would lay close and flat to the head when the dog is resting but is slightly raised and turned forward when the dog is alert or agitated. The muzzle is strong, well shaped and slightly tapering to a black nose. The black pigmented lips enclose teeth that meet in a scissors bite.

The dogs medium length neck smoothly merges with the well muscled body. The ribs is well sprung, the deep broad chest reaches to the level of the elbow. The short tail may be docked. Compact feet support the muscular body.

Entlebucher Mountain Dogs appearance is made more appealing by the tri colored coat. The dog has a double coat. The topcoat is shiny, short close fitting and rough to the touch, the undercoat is soft, grows densely, wavy and of varying color. Basically, an Entles color is black with markings of fawn, tan or mahogany. The dog has tan markings on the cheek, on the brows (above the eyes) on the muzzle, on both sided of the chest and on the feet. A blaze of white marking would run from the head to the bridge of the nose and at times would completely cover the muzzle. Front chest is also covered with white markings.

Entlebucher Mountain Dog is a wonderful breed. Primarily developed as a working dog, an Entles personality is characterized by independence, and self confidence. This is a hardworking breed that has an inordinate desire to please the master. They are known to get too attached to the human family and would give the master its unwavering devotion. These dogs would demand attention and would like to be made a part of the familys activities. This dog is not for someone who does not have the time or the inclination to provide the dog with constant attention as these dogs are not merely house pets that can be left on the yard or outside the home alone.

Being a fun loving and playful people dog, Entles would be deliriously happy if surrounded by the human family. Generally, this breed is great with children. However, the dog needs to be socialized preferably at an early age so that they will be taught to be gentle especially with small children. These dogs are naturally boisterous. Having a young and unsocialized Entle in a home with very young kids and a frail elderly would be like having a bull in a china shop.

Entles are an intelligent breed. They can adapt to obedience training easilythat is if they want to. Trained to work with unruly stock, these dogs possess the inherent ability to be dominant, to be obstinate and to have a mind of their own. The owner needs to be assertive and firm to be able to dominate the dog. It is imperative that this dog be taught to heel otherwise you will have one unruly dog in your hand.

Entles are extremely territorial thus they make excellent watch dogs. These dogs will protect their space. They would not fail to alert you of anything unusual. Entles bark a lot. This is why this dog is not one for an apartment dwelling. You would surely have irate neighbors as this dog will bark at any thing and every thing. Moreover, being working dogs, an Ently would need to have an ample amount of vigorous daily exercise. A home with a modest sized yard would be most suitable. However this does not mean that the dog will be left alone in the yard while the family is inside the house. Again the dog will cause a ruckus that will disturb the neighbors.

Entles are wonderful dogs to have for about 11 to 15 years as long as your lifestyle and personality will be compatible with the personality and temperament of the dog.

Entlebuchers would need very little care. This breed is easy to groom. Entles are average shedder and all it takes is a weekly brushing of the coat to remove loose and dead hair.

Entlebucher Mountain Dog originated from Switzerland. This dog is one of the four Swiss Mountain Dogs. The Appenzeller and the Entlebucher are the smaller mountain dogs that were developed primarily as cattle herding dogs. The other two bigger mountain dogs were used as stock guardians and cart pullers that bring the milk and cheese to the market.

Entlebucher got its name from Entlebuch, a valley in the town of Lucerne. It was believed that this dog originated from the Mollosus type of dogs that the Romans brought as they pass through Helvetia centuries ago.

In 1889 the first description for the Entlebucher was written by E. Bauer in The Swiss Central Newspaper for Hunting and dog Enthusiasts. Although popular in Switzerland, the Entle is considered to be a rare breed in other parts of the world. By early 1900s the breeds number considerably decreased and was nearly lost. The dog was saved from extinction through the efforts of Franz Schertenleib. Schertenleib together with Professor Albert Heim scoured the country side looking for the Swiss Mountain dog to perpetuate the breed. Through the efforts of Professor Albert Heim and the dedication of breeders in Switzerland and in Germany the Entlebucher breed was preserved.