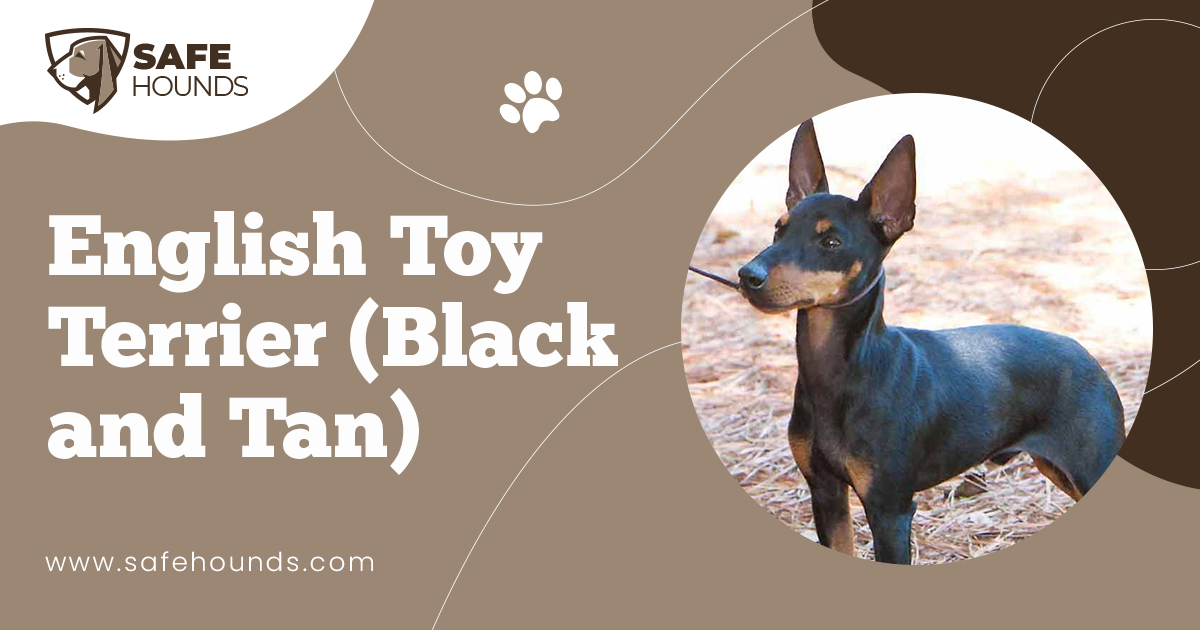 The English Toy Terrier (Black and Tan) belongs to the toy dog group. Black and Tan smooth coated terriers have existed in England during the 16th century. These dogs were the forebears of the modern day English Toy Terrier. The Manchester Terrier was developed from the smooth coated Black and Tan Terriers. Owning small dogs became a fad during the Victorian era so that the smaller specimens of the Manchester Terrier were bred to develop a smaller breed of dog. These dogs that measure about 10 to 12 inches at the withers and weighs from 6 to 8 pounds was later on given the name English Toy Terrier (Black and White) and recognized as a separate breed in 1938. This breed was recognized by the Kennel Club in 1962.

During the early existence of these dogs, English Toy Terriers have been the partners of Fox Hounds in hunting rabbits and other small game. These small dogs were usually carried by hunters in their pockets or in specially designed pouches and utilized to flush out the quarry hiding in thick underbrush. The small size is an import asset that allows these dogs to follow the quarry to their dens. These dogs though are highly valued for their ratting abilities. Throughout the history of the English Toy Terriers, the dogs were utilized to hunt vermin and to rid homes, barns, warehouses and even ships of rats. Because of their excellent ratting reputation, an English Toy Terrier is a common sight in rat pits and being betted on by rat baiting enthusiasts.

An English Toy Terrier (Black and Tan) is a sleek and cleanly built dog. The smooth glossy coat of well defined black and tan coloring gives the dog an elegant appearance. This is an affectionate breed that forms a strong devotion to its family.

As the name suggests the only permitted coat color for an English Toy Terrier is black and tan. This elegant dog has a thick and glossy coat that is predominantly ebony black with well defined tan coloring that is likened to a rich chestnut. The tan and black coloring does not blend into each other but form marked and distinct color divisions. Tan hairs cover the front of the forelegs extending up to the knees. The center of each pastern has a black thumb mark and a thin black line known as penciling marks each toe. Front of hind legs are well tanned as well. The muzzle of this breed is distinctly tanned. These dogs have a tan spot above each eye. The under jaw, the throat, the inside of the ears and each side of the chest are tan as well.

The distinct coat colors as well as the cleanly built and well balanced conformation gives the English Toy Terrier a compact and elegant appearance. This breed has a long narrow head, a flat wedge-shaped skull and a slight stop. Compressed lips hold the upper and the lower jaws tightly together. Level and strong teeth meet in a complete scissor bite. Dark to black small almond shaped eyes are obliquely set. Nose is black. Candle flame shaped ears with slightly pointed tips are carried erect. This breed has a long and slightly arched graceful neck. The back is slightly curving up into a rounded rump. The narrow and deep chest has well sprung ribs. Loins are well cut up and the buttocks are gently rounded. Straight forelegs are fine boned. Set low, the tail that is thick at the root and tapers to a point does not reach below the level of the hocks. Neat small feet have well arched toes. An English Toy Terriers gait is described to be similar to the extended trot of a horse.

The English Toy Terrier (Black and Tan) is a sweet dog that enjoys giving love to the members of the family but the dog is noted to give its loyalty and adoration to its favorite person. This dog is categorized as a toy breed but an English Toy Terrier is no ornamental lap dog. Effervescent, vibrant, courageous, alert, friendly these typical terrier temperaments are possessed by the English Toy Terrier. This dog makes an admirable watchdog as aside from being alert, the dog has a keen sense of hearing and the friendly attitude is not extended to strangers. The owners will be warned of any unusual sounds and movements in his territory. Because of the playful nature, the dog would be a suitable companion and playmate of the children. However, being small and delicate, the children must be cautioned to be careful in handling the dog. In any case, this dog will not tolerate being handled clumsily. An English Toy Terrier will tolerate other dogs if properly socialized at an early age or if the dogs were raised in the same household however, this dog will need a well fenced yard as it will be very dangerous to smaller pets because of its well developed ratting instinct. This breed will be comfortable in apartments, in a home in the country, in a farm or in a home in the city.

An English Toy Terrier (Black and White) is a clean breed. The dog sheds but because the cost is short it would need very little maintenance. A grooming mitt or a chamois cloth will remove dead hair and maintain the high gloss of the coat. The dog can be bathed occasionally using a mild animal soap and shampoo. Because of the short coat, the dog would need a coat if the weather is extremely cold. This is a small breed but moderate amount of exercise will still be necessary not only to keep the dog fit and healthy but also to ensure that the dog is mentally occupied to keep boredom at bay. This bred is not a fussy eater and does not have special dietary requirements. The English Toy Terrier suffered from a number of health concerns when the breed was introduced over a hundred years ago but breeders have been successful in breeding out these health concerns. An English Toy Terrier is expected to live between 9 to 15 years.

Terriers have existed as early as 16th century in England. Smooth and rough coated dogs with a predominant black and tan color were depicted in works of art during that era. These dogs were hunted with Fox Hounds. Mounted hunters carry these small dogs in specially designed pouches. Because of the small size, terriers were tasked to flush out the fox from the dense underbrush and from burrows. Terriers though were specifically developed to be ratting machines. These dogs have been utilized to rid houses, warehouses, barns, coal mines and ships of vermin. Terriers are commonly kept by horse owners as these dogs eliminate rats from tack rooms. Terriers though are highly valued for their performance in rat pits. Rat baiting is a popular sport in Victorian England where the dog and a number of rats were placed in a circular pit. Bets were placed on a dog that can kill the most number of rats in the allotted time. Tiny, a 5 pound black and tan terrier set a legendary record of killing 300 rats in less than an hour in 1848.

During the early 1800s, these small dogs were interchangeably known as Black and Tan Terrier, Old English Terrier or simply as English Terrier. When rat baiting was outlawed, fanciers of the breed have introduced breeds of small hounds to refine the breed. Aside from the white and the black and tan coloring, dogs are also seen with blue and tan or brindle and white coats. This was attributed to the Italian Greyhounds and or Whippet that were introduced to the English Terrier. Due to the improved appearance, the ratters have effortlessly moved from rat pits to conformation show ring. At first the dogs were classified by color being black and tan or white. Later on the English Terriers were classified by weight. The dogs were divided into the larger Manchester Terrier and the smaller Black and Tan Terrier. The banning of the blood sports has greatly affected the breed. Breed population declined especially when the breed has evolved into a fancy dog because breeders have given more importance to developing the appearance of the breed. Developing a dog with the ability to do the original functions has taken a back seat. Breed enthusiasts have changed breed name from Miniature Black and Tan Terriers to English Toy Terrier (Black and Tan) in 1962 with the hope of stopping the decreasing numbers of the breed. However, this did not stabilize breed population. The English Toy Terrier (Black and Tan) is considered to be one of the rare breeds of dogs in England. This breed is even rarer in other countries. Due to extinction concerns, the UK Kennel Club has allowed Toy Manchester Terriers in North America to be re-registered as English Toy Terrier (Black and Tan) as long as the dog is certified to be a toy variety.