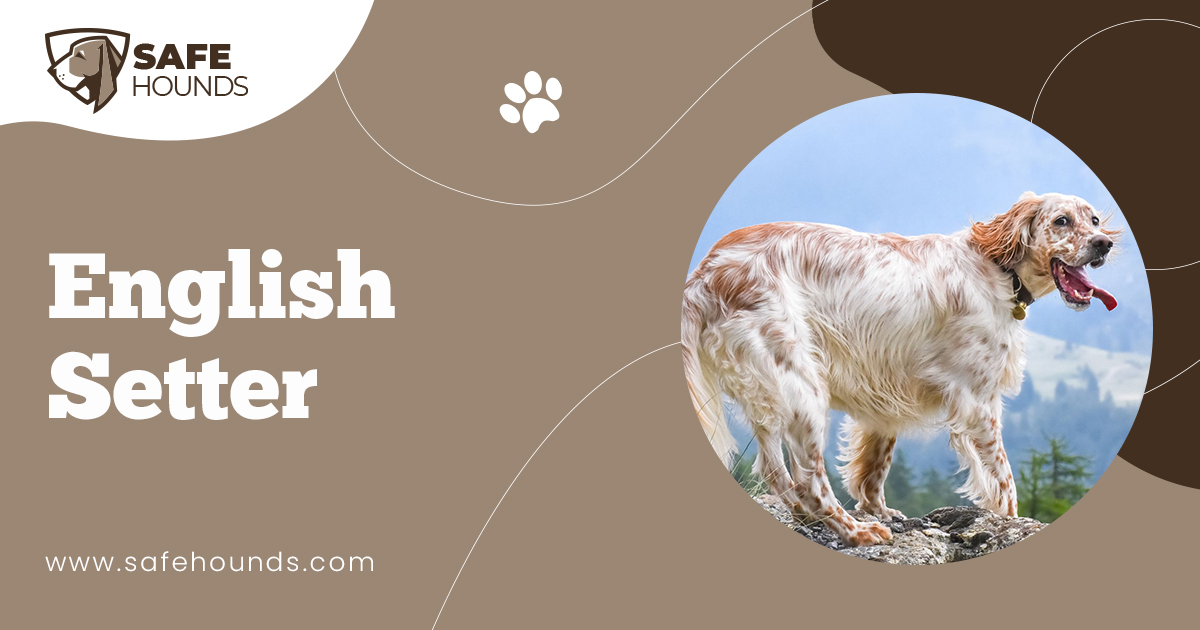 English Setters are a beautiful breed. They have a unique speckled coat that has many markings of various sizes. They have long silky hair and some may be wavy. They can be either white with blue, lemon, orange, or brown markings. They have along head and the muzzle is about half the size of the head. There eyes are large and you can see the sweet expression in the eyes of this dog.

The English Setter is a gentle breed and very friendly. They are great with children and love to get affection from anyone willing to give it. They can be a watchdog, but they will bark and if they talk friendly to them, they will wag their tail and wait for a pet. Not much of a watchdog except for letting you know someone unknown to them is around.

Your English setter is a digger and if let him out in the yard in a penned area, they will eventually dig their way out to get to you. They also are barkers so you can expect to have a singer in the family. If you have close neighbors or live in town, you should not have an English setter. They need a yard out in the country to run and bark or you will probably have many complaints from neighbors that do not enjoy your dogs singing abilities.

The English setter is a breed with a fur coat that is long and hangs down with ease. Their coat needs special trimming. The coat colors are mainly all white with blue, brown, orange, or lemon markings. The hair on the Setter is long, wavy, and has a silky feeling.

The eyes on the Setter are normally a hazel color. Their eyes are very bright and brilliant and give off the most loving expression. Their tail, legs, ears, and their underside is all fringed with hair. Their nose is black in color. Their ears are long and the point of their ears is like velvet. The ears are set low and set back. Their tail is straight and tapers to a point at the end. Their tail stands straight out when standing to a point.

They stand with a mission, as well. When they notice something, they think you might take an interest in, even if they are not hunting, they will stop and point at the object, animal, or person. They will show off their beauty by their position and the point of their silky tail.

With having this dog outside, they must be fenced in. Due to their history, they like to run and are all dog when they are outside. Therefore, if you have a lot of traffic around, then a fenced in area for this breed will be a great idea. The English setter can be a big barker if they are not trained right when they are younger. They do also have a thing for drooling, but it is not that bad like some breeds can be. This breed is not recommended for apartment life due to the fact they love to be active.

The care for this breed is that there is a little bit that you will need to know. This breed needs a great amount of exercise. They do tend to gain weight easily so make sure to let them roam free if you can or instead, take them on nice long brisk walks. If not exercised like they should be, they can be difficult to manage.

Their long swift coat should be brushed or combed regularly to keep the coat looking nice and healthy. Make sure to watch for burrs or tangles in the fur coat. Also, give extra care for when the dog is shedding. Make sure to keep a regular trim on the bottom of their feet and to trim their nails regularly. This breed is your normal average shedder.

Many people think the English Setter was started over 400 years ago. The breeds of origination were Spaniel Pointer, Water Spaniel, and Springer Spaniel to get this excellent hunting dog. The English setters usually stand and point at their game where back in the 1900 they would set on their game until the owner got there. At this time, they were known as the Setting Spaniel.

Todays English setter is from the development of Mr. Edward Laverack, with his careful breeding during the 19th century in England. Then another Englishman named Mr. R. Purcell Llewellin developed the working Setter. His breeding was very successful, he started showing them throughout England, and then it spread to the United States.

The Llewellin strains of Setters are one of the most famous breeds of the Setters and have been known to be the perfect for the field trials in hunting. There are many other strains like the Newfoundland, which consists of breeding the English, Irish, and Golden Setter together over a 100 years. This resulted in a breed that was perfectly adaptable to any and all terrain and has the traits of coloring from any of the Setter types there were.

The breeders of today all want to bred theirs and have Llewellin traits in theirs as well. Having this bloodline guarantees a perfect English setter. Llewellin would not settle for anything less. There are many breeders who think they can tell a purebred Llewellin from any other just by its markings. However, irrevocably there is no way to tell if it is a purebred this way. To have some Llewellin blood in your breed, chances are very high. His bloodlines go way back and he bred for many years to many other champions. Some breeders who had these dogs were Ryman, DeCoverly, Tomoka, and Tekoa Mountain to name a few. They bred with Llewillin and produced many champion studs that bred down the years to present day.