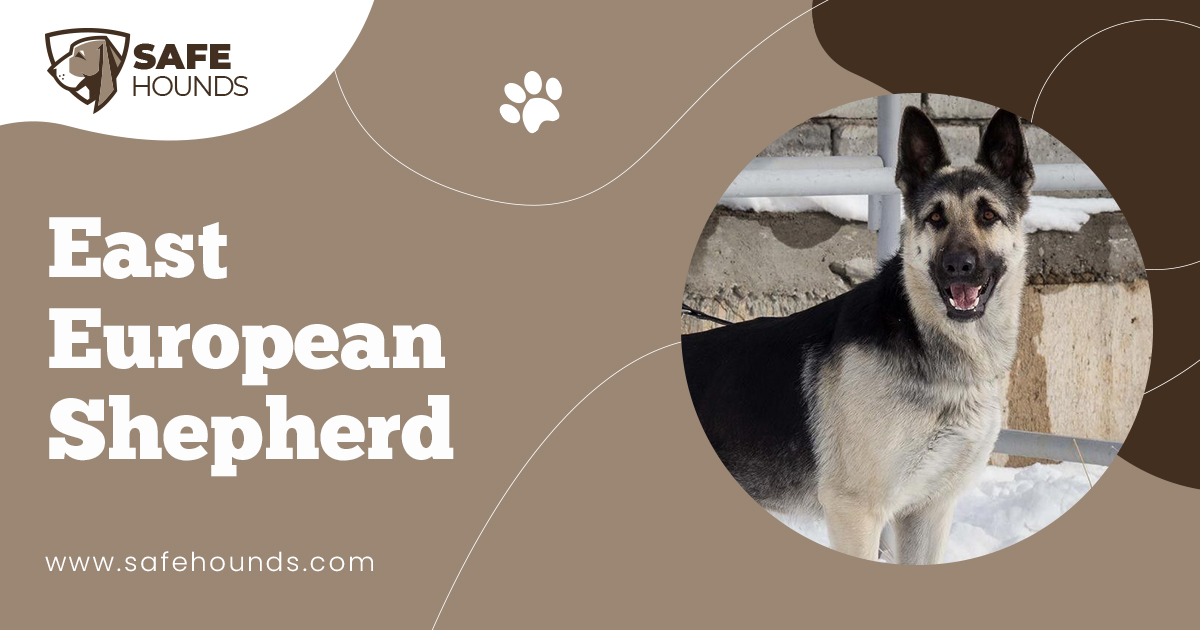 The East-European Shepherd is USSRs version of the German Shepherd Dog. When the German Shepherd Dogs were brought to Russia in the 1920s, the breed had appealed to the Russians not only because of the outstanding appearance but also because of the breeds excellent guarding abilities. The dog was crossed with local Russian breeds in 1930s producing a fiercely loyal breed that was commonly used by the Russian army. This breed has become the most favored breed of the KGB for Kremlin duty. However, because of the nature of the jobs the dogs perform, only dogs with pure black coat colors are accepted. Breeding of guard dogs to be used by the KGB are strictly monitored to maintain the black coat color. The entire litter will be destroyed if one puppy has another coat color. The East-European Shepherd are at first prevalent in the Byelorussian region and western provinces of USSR. During the early years of the breeds existence it was commonly known as Byelorussian Ovcharka. The breed has spread widely not only in its country of origin but also in other countries. The East-European Shepherd commonly known as Vostochnoevropekskaya Ovcharka and Owczarek Wsohodnioeuropekski is presently considered to be the most popular breed in Russia.

This breed has the general appearance of a GSD although the East-European Shepherd is a larger dog with a stockier build. Compared to a GSD, this breed has a denser coat that allows the dog to withstand the harsh and extremely cold winters of Russia. The wooly cashmere-like undercoat is spun by owners and used as undergarments. The most common coat color is black, black and tan and brindle. These dogs have admirable protective instinct. The dog will protect its territory and the people under its charge at all cost. An East-European Shepherd is leery and suspicious of strangers but the dog has a confident and stable demeanor that makes it an ideal family companion. This breed has no major genetic health concerns although it can suffer from hip dysplasia which is a common concern for shepherds. This breed is a voracious eater. Obesity is a common problem of an East-European Shepherd. Owners must be careful not to over-feed the dog. Moreover, an owner must ensure that the dog is give opportunities to exercise. Aside from these concerns an East-European Shepherd is a fairly healthy breed. They are expected to live for about 10 to 14 years.

The East-European Shepherd has descended from local Russian breeds and from the German Shepherd Dog. About a quarter century of selective breeding resulted to a breed that is distinctly different from the GSD. The East-European Shepherd is a medium to large sized breed with a sturdy bone structure and well developed muscles. Sexual dimorphism is very definite for this breed. Males are heavier and bigger than females. This breed generally measures from 24 to 30 inches and weighs between 73 and 113 pounds. This breed has a massive wedge shaped head and a slightly sloped and rounded forehead. It has a pronounced stop and a muzzle that is equal in length to the skull. This shepherd has a strong lower jaw and well developed teeth that meet in a scissor bite. Dark medium sized eyes are oval shaped and obliquely set. Well colored eyelids are close fitting. Ears are medium sized, pointed at the tips, turned forward and high set on the head.

An East-European Shepherd has a powerful neck that curves into the moderately wide and deep chest. This breed has a straight, wide and level back. The wide loin is well muscled and slightly arched. The belly is moderately tucked up. Saber shaped tail is long, reaching the hocks. Strong and muscular legs have oval feet with well arched toes. This working breed has a medium length, dense and smooth coat that allows the dog to withstand the extremely cold Russian winters. The well developed coat is wooly. Coat colors range from black, brown, gray and red (agouti), black and red and sable. Some specimens of this breed may sport a facial mask.

The tough aggressiveness of the East-European Shepherd is what makes this breed an outstanding watch dog. This working dogs devotion and fierce loyalty to its master is incomparable. This breed would defend its people at all cost but it will also crave for the attention of its family and should not be left alone at home for a long while. Being working dogs, the breed would need to be given tasks to do as boredom will turn this well mannered dog into a destructive pet. An East-European Shepherd has the propensity to chew whatever they can lay their paws on. This is a stable tempered dog but because of the size and the inclination to jump, the dog is not a good choice for a family with very small children. The dog is mild mannered with its family but its playful jumping behavior can inadvertently hurt small kids. The dog is not recommended for apartment living either. This large energetic dog can easily knock over treasured objects. The dog would thrive in a rural environment where it can run to its hearts content without the restrictions of a leash. East-European Shepherds have high exercise requirements. The dog would be a suitable choice for an active person. This breed makes an excellent jogging, hiking and cycling companion.

The dense smooth coat allows the dog to endure the hash weather conditions of Russia. Frequent bathing is not recommended as it will remove the natural oils that moisturize the coat and the skin. Bathing must be done only when extremely necessary. Dry shampoo the dog instead. This breed would not require an extensive grooming routine. The coats good condition can be maintained with a twice a week brushing. These grooming sessions will be a good bonding moment for pet and master.

The German Shepherd Dog is a breed believed to have originated in Germany during the 1800s. This working breed was originally developed for herding sheep. However, these dogs are noted for their well developed protective nature. German Shepherd Dogs are strong and intelligent dogs that respond well to training. In the history of the breed, the dogs were not only utilized to herd livestock as they have also excelled in police and military works.

The new breed is larger than the German Shepherd Dog. The East-European Shepherd is a harmoniously built breed, sturdy boned and with well defined muscles. Breeders have succeeded in creating a distinct breed as the VEO, as the dog is also known has different physical and behavioral traits from the GSD. The East-European Shepherd is an alert breed but it is noted to be silent while on guarding duty. This trait is highly valued by the KGB. The breed became the favorite dogs of USSRs secret police agency. In 1964, the first standard for this breed was approved by the Cynologic Council of USSRs Ministry of Agriculture.