A Dutch Smoushond is a small terrier type dog with a moustache, a beard and lush eyebrows. These physical features strongly resemble the Schnauzer, a rough haired dog made notable by its magnificent beard. This breed of unknown origin has existed during the 1800s in the Netherlands. During that time this dog was called gentlemans stable dog as it was usually kept in stables. Being a terrier type of dog, this breed is utilized to rid the stables of rats. The dog is most commonly seen sitting beside coachmen as it has developed into a wonderful companion. The breed earned its name because of the shaggy fur and the longer hair on the dogs face that is compared to the beards and long hairs of Jewish men. Smoushond was taken from the Dutch word Smouzen which refers to Jewish men. The word Dutch was added to the name as aside from the fact that the dog originated in Holland, the name also distinguishes the breed from the similar looking Belgian griffon. 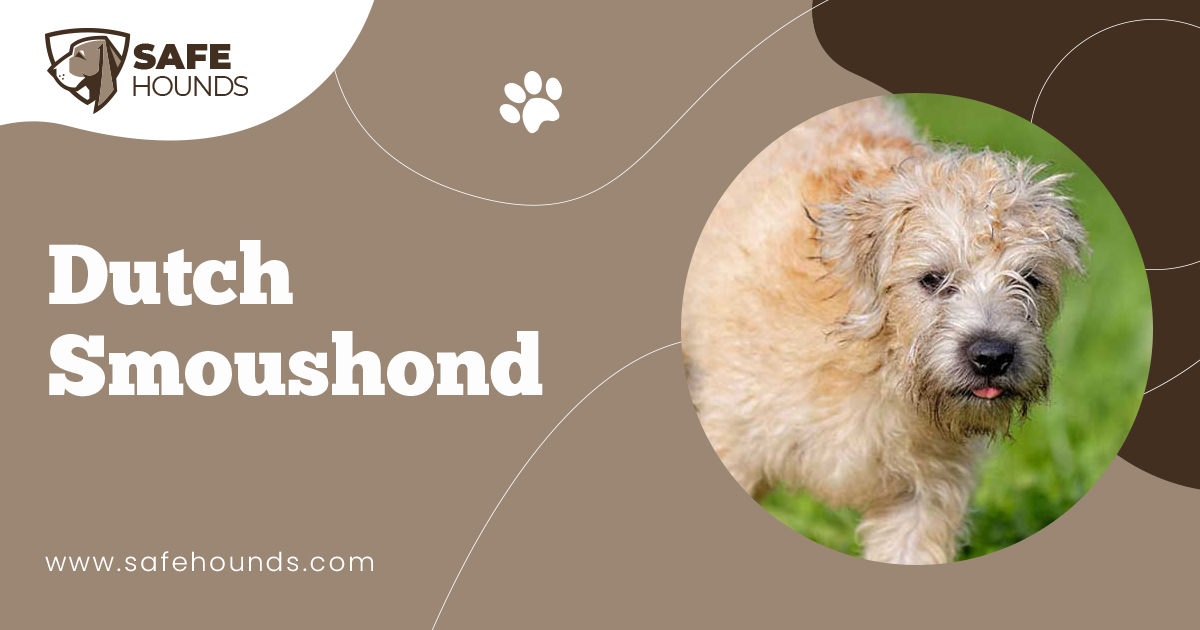 The Dutch Smoushond is an intelligent dog that is noted for its capacity to adapt to any given situation. The excellent ratter of bygone years still hunts the occasional rat but because it has an affectionate, cheerful and friendly nature, it has developed into a lovable family pet. A Dutch Smoushhond is not a vicious breed but it has a well developed protective instinct that makes it an alert and capable watchdog. As the dog has an inherent propensity to bark, strangers will most certainly be announced with excessive barking.

The Dutch Smoushond is a popular dog in its country of origin but it is unknown in other parts of the world thus it is considered to be a rare breed. The breed was recognized in 2001 by FCI. Of the major kennel clubs only the United Kennel Club recognizes this breed.

The Dutch Smoushond are commonly referred to as coachmans dogs during the early 18th century as these small terrier type dogs are most commonly seen following horses and carriages. Over the years, these dogs have developed well muscled and strong bodies. These rough coated dogs have squarely built bodies that give the impression of strength and agility. The straight broad back, the slightly arched loin, the well muscled croup as well as the broad chest adds to the striking conformation of this breed. Straight strong forelegs and sturdy muscular hind legs support the well muscled body. The rather short tail is usually carried gaily when the dog is alert or on the move and hangs limply when the dog in relaxed. The neck like the tail is also on the short side though the neck is muscular.

This breed has a lively, friendly and a rather comical nature. The happy personality is evident in the large dark round eyes with well developed dark eyelashes. A Smoushond has a rather short head, a slightly domed skull and a strong muzzle. The black nose is broad. Black rimmed lips are thin and tight. This breed has strong jaws and teeth meet in a perfect scissor bite. Set on high triangular shaped ears are small, thin and has rounded tips.

The hair is another distinctive feature of this breed. Coarse wiry hair covers the entire body giving it an unkempt look. Hair on the legs is of medium length, not too thick and points backwards forming a light feathering. The tail is bushy but no fringe is formed. The head has the same wiry hair though the hair on the skull is shorter. Long hair on the cheeks and on the lips forms a moustache and a beard. Long eyebrows drop over the eyes but do not cover the eyes and obstruct the eyesight.

The Dutch Smoushond makes a great family dog. This small ratter is jam packed with good qualities. The dog is friendly, affectionate and obedient. Apart from being charming this breed is noted for its good sense of humor. The dog is rather aloof with strangers but it is very playful and loving with its family. A Smoushond has a lively and cheerful personality that makes it an ideal playmate of the children. This friendly breed gets along well with other dogs. The friendly nature extends to other animals in the household. A Smous is even known to share its doggie bowl with a cat. However, being a ratter, the dog should not be trusted with very small furry pets that the dog would think of as prey.

This is an intelligent breed, one that has an innate eagerness to please attitude. Because of its eagerness to please the family, training will be fairly easy especially if the training is conducted in a consistent and firm manner. This breed is good natured but if it sees that the master is rather relaxed the dog might try to dominate the master. This is a small breed but a strong willed and dominant Smoushond would be difficult to handle.

Because of its adaptable nature, the dog can live virtually anywhere. Having been developed to live in stables, the dog would do well in the rural areas. However, this breed will do famously in an apartment too as long as it is provided with sufficient exercise. This is an energetic breed though unlike other energetic breeds exercise requirements of a Dutch Smoushond may not be very high. Nevertheless, a dog that is made to live in an apartment should be taken on long walks daily otherwise the dog will be bored. These dogs are yappers and bored Dutch Smoushonds will surely irritate the neighbors.

The unkempt appearance is the hallmark of a Dutch Smoushond. Grooming is really quite easy. The coat should not be brushed to maintain its shaggy appearance. The wire coat can be combed once in a while with a wide toothed comb to remove tangles and matt. Moreover, this breeds coat would need to be hand plucked twice a year. This can be done by a professional groomer or the owner can learn the ropes of plucking the coat by hand. Hair plucking is done to allow new hair to grow. Wire coated dogs are not clipped or trimmed as trimming destroys the color and the texture of the coat. Hair on the dogs head should be left alone as it does not have to be plucked. In between grooming sessions, the hair inside the ears must be removed. Hair between the nail pads must be trimmed as well.

The Dutch Smoushound is one of the breeds whose origin is lost in antiquity. Nothing is really certain about the history of this breed although because its appearance is very similar to that of the German Schnauzer it was deemed that both breeds have descended from the same progenitors. The German Coarsehaired Pincher is considered to be the forefather of the German Schnauzer. This breed is so common in Germany during the late 1800s. The German breeders became so discriminating. As only the black and the salt and pepper colored dogs were preferred the red and yellow coated whelps in a litter were destroyed. It was said that an enterprising and cheap Dutch merchant by the name of Abraas bought the rejects at a very low price and sold the puppies on the streets of Amsterdam at a considerably marked up price. The dogs were sold as heeren-stalhonden or stable dogs. These red or yellow rough haired dogs developed into the Dutch Smoushond and became a popular gentlemans companion. This breed became very popular in Holland. The Hollandse Smoushond was given the title Smoushondje, a Dutch word which means dog of the Jews.

The Smoushond is an excellent ratter. This stable dog that is commonly seen in the company of horses and cab drivers rid the stables of rats. In the 19th century, these little charmers have evolved into endearing family dogs. The breed was recognized by the Dutch Kennel Club and by FCI. War years though proved o be detrimental to the existence of the breed. Breed numbers were enormously reduced. A litter was registered in 1949. As there were no subsequent registrations, the breed was dropped from the listing and was considered to be extinct.

In the early 1970s, a Dutch woman named H. M. Barkman attempted to reconstruct the breed. Mrs. Brakman was very dedicated to her task. She advertised for dogs resembling the now extinct Dutch Smoushond, talked to judges who remembered the breed and gathered pictures and information about the old breed. Assisted by other dedicated lovers of the breed, H. M. Brakman succeeded in recreating the Hollandse Smoushond through selective breeding. A specialty club with forthcoming recognition from the FCI and from the Raad van Beheer (Dutch KG) was refounded in 1977. With about 125 dogs registered yearly, the breed is still low in numbers but it has gained a stable footing and quite far from being extinct. The Smoushond breed club is trying to build up the breed and dogs are not sold outside Netherlands as yet as specimens are used for the breeding programs.