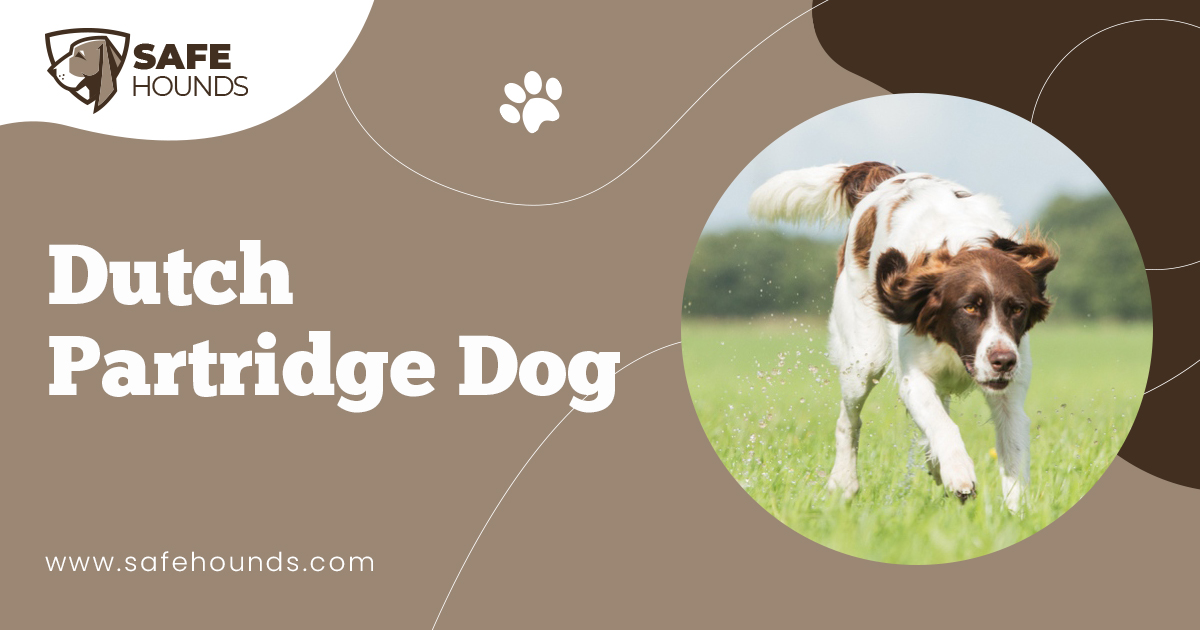 A dog in the Netherlands that has a strong resemblance to the spaniel and setter, one that sports a white coat with brown or orange markings and one that rotates the tail in a circle to warn the hunter when a game is located is a Drentse Patrijshond!

This breed that is also known as the Dutch Patrtridge Dog hails from Drente, a province in the Netherlands. This breed is an excellent pointer and retriever. This dog is affectionately called Drent, a name that it shares with the people of the Drente province. The Dutch Partridge dog is most valued for its admirable quality of hunting under the gun. The dog originally hunts quails and partridges. The feathered game were no longer plentiful in Netherlands as they once were but the Dutch Partridge dog is still much valued by the hunters as it has adapted well to hunting pheasants, rabbits and hare and foxes.

It was believed that this breed was created after the firearms were first used to hunt. This is the ideal dog for a Dutch hunter who would want to hunt leisurely without exerting too much effort. Customarily, the dog would thoroughly search the surrounding area for a game without straying too far from the hunter, never wandering beyond gun range. When a game is found the dog would signal the hunter by rotating the tail. The dog would let go of the game when the hunter is within shooting distance. The dog marks the location and retrieves the fallen game. This is an all around gun dog that hunts well in land and in water.

This breed will be the excellent companion of the hunter during the weekend, will be an alert watch dog at night and would instantly change to playmate mode in the presence of the children.

The Drentse Patrijshond has a well proportioned compact and muscled body that shows apparent power. This breeds build is heavier than that of a Small Munsterlander. A Drents body is somewhat rectangular given that it is longer that the height measured at the withers. This dog has a medium length powerful neck, a level back and a broad moderately sloping croup. The deep chest reaches the level of the elbows. The set on high tail is carried horizontally with the tip curving upwards when the dog is on the move. A very distinct trait of this breed is to move the tail in circles when a scent is picked up. This movement is done to signal the hunter that a game is found.

This breed has a predominantly white coat that can have brown or orange patches. Some specimens have brown mantles and others have tan markings. A Drents body appears to be covered with long hair because hair of different lengths covers different parts of the body. Hair is longer on the neck and the forechest. Long wavy hair covers the ears. The fore and hind legs, the tail as well as the back of the thighs are feathered. Dense hair grows between the toes of the dog.

Apart from being an excellent hunting dog, the Drentse Patrijshond is known for its gentle nature and well balanced temperament that makes it an exceptional home companion. This breed is obedient, loyal, and attentive and has the innate eagerness to please. These are affectionate and gentle natured creatures that gets along famously with children. This breed will tolerate other dogs and smaller pets.

In spite of these admirable qualities, a Drent would still need obedience training. Training this breed would be easy as this is an intelligent and obedient dog. However, training must be done in a consistent but positive and gentle manner. These dogs may not be aggressive but they still make excellent watch dogs. This is because a Drent is vigilant. These dogs are not yappers and when they do bark it is to warn the family of intruders.

This breed will do well in a city or in a small household as they do not need a great deal of exercise. Walking the dog around the block or allowing the dog to swim or to play fetch with the children will take care of its exercise needs. What is more important is to let the dog feel that it is a member of the family. This is a most suitable dog for a busy owner. a dog that will not be given the chance to exercise for quite a while will not be destructive unlike other breeds.

This breed does not need elaborate coat maintenance as the coat practically sheds off dirt. Brushing the coat once a week giving particular attention to the body parts with longer hair will ensure the good condition of the coat. The dense coat protects the dog from thorns and brambles. After a day of hunting, the coat must be thoroughly combed to remove burrs and cheat grass. Ears though must be frequently checked and cleaned. Nails and hair between the pads of the feet should be trimmed regularly.

The Drentse Patrijshond is a breed of gundog that has existed for hundreds of years. This breed originated from Drentse, a province in the north eastern part of Holland. It was speculated that this rare breed originated from the Spioenen or Spanjoelen that came from Spain travelled through France and came to the Netherlands in the 16th century. It is most likely that this breed as well as the spaniels and setters have the same ancestors. The Drentse Patrijshond is believed to be related to Germanys Small Musterlander and to the Espagneul Francais of France.

For centuries, this breed that exited in the rural province of Drenthe remained undocumented. The Drentse Patrijshond was only recognized as a modern breed in 1943 when the Raad van Beheer op Kynologisch Gebied (Dutch Kennel Club) developed and approved the first standard for the breed. This breed that was otherwise known as Partridge Dog in the Netherlands was kept a pure breed in the province of Drenthe. The province of Drenthe is quite unusual given that while other countries in Europe give the nobility an exclusive privilege to hunt, in this province the common people were allowed to hunt. This means that the landed gentry, the local mayor as well as the farmers needed a dog that will cater to their various hunting needs. The Drent, as the breed is commonly called aptly fills this purpose. Other breeds that were kept in kennels of the affluent hunters were specifically used to hunt. Not the Drent! This is a versatile breed, one that will hunt all day and still pull watch dog duty at night. This breed performs other farm chores. A Drent is commonly seen pulling carts filled with farm produce. This dog has become the lively playmates of children and the devoted and loyal companion of the master. A Drent will point, retrieve and hunt feathered and furred game. Presently there are about 5,000 dogs registered in the breed club books. The Drentse Patrijshond is a favorite hunting dog in the Netherlands although relatively unknown in other parts of the world. This breed shows a strong instinct to hunt. The Drent is a tenacious and aggressive hunter but the dog tend to be docile and calm inside the home, a perfect companion of the master and a lively playmate of the children.