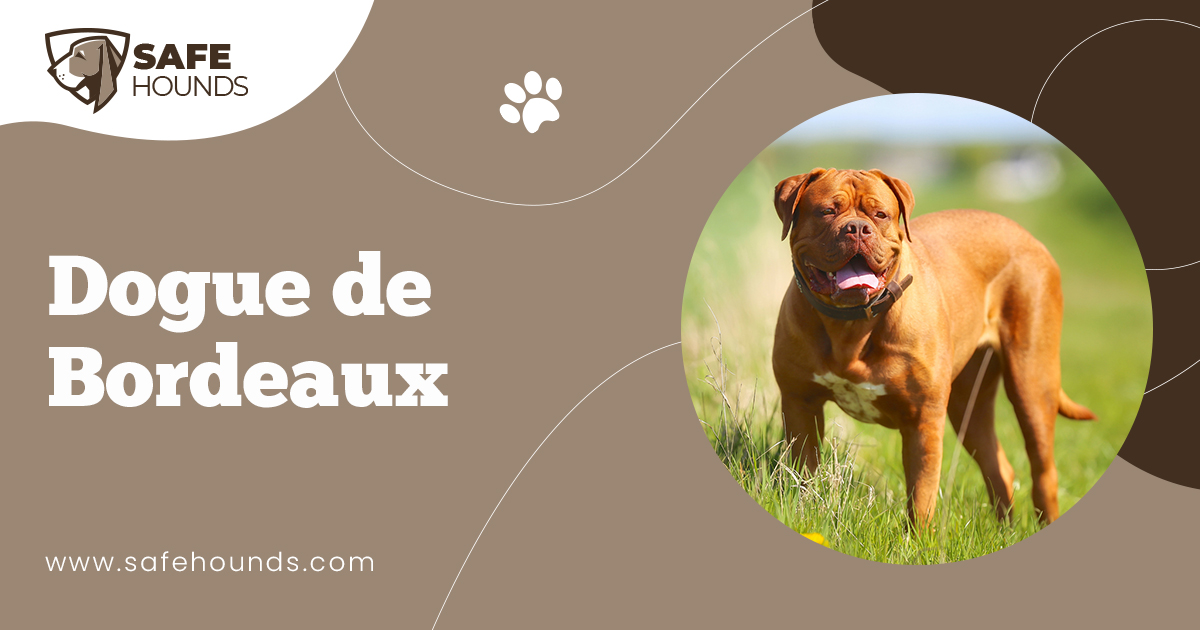 A dog with a massive head, powerful physique and an over abundance of wrinkles that gives a perpetually worried appearancethis is a Dogue de Bordeaux. Also known as the Bordeaux Mastiff and French Mastiff, this dog with a ferocious and forbidding appearance originated from France. A lot of people are not aware of the existence of this breed until a slobbery mastiff first made an appearance in Hollywood in the movie Turner and Hooch with Tom Hanks. Beasley, a Dogue de Bordeaux played the part of Hooch and catapulted this breed to fame.

Dogue de Bordeaux is a brachycephalic molossoid type of dog. A Dogues head is considered to be the largest in the canine world. The circumference of a male dogs head is almost equal to the dogs height measured at the withers. A females head is a bit smaller but it is still considered to be huge if compared with other breeds. The well pronounced brow, the furrowed wrinkles, the thick neck, the powerful chest as well as the muscular body gives the dog a formidable appearance.

The Dogue was once a fighting dog, pitted by the owners against lions, bears, tigers, wolves and other ferocious animals in the ring. Dogues were also utilized as hunting dogs. For centuries this breed has served many French masters as protector of family and property, as cattle drovers as well as cart pullers. The ferociousness of this breed was somehow softened by present day breeders. In spite of the formidable appearance, present day Dogue have a calm and good temperament which makes it a loyal and outstanding family pet. A Dogue is still considered to be a good watch dog and protector. The breed still possesses an inherent aggressiveness that makes them fearlessly confront strangers and intruders.

A Dogue is an affectionate and loyal family pet, one that is not a nuisance barker and one that will be content to stay indoors. However, a Dogue has a massive physique. Owners should be aware of the fact that his dog would take a lot of space at home and in the car. These are giant breeds that would normally weigh at least 100 plus pounds and are known to slobber, snort, wheeze and snore loudly. Typical to giant breeds are shorter life span. A Dogues life span is 7 to 9 years. Moreover, big breeds are most often afflicted with serious health problems. Because of the size, breeding can be difficult. Most often Caesaren sections are needed at birth due to the large heads of the litter. Moreover broad chested dams have the tendency to lie on their stomach while nursing the puppies. A breeder needs to be vigilant as puppies are often squashed by the massive body of the dam.

Typical to a Mastiff is stubbornness. Some pet dogs would go out of their way to please the owners. This is not so with a Dogue as they are known to have their own minds and tend to do things their own way and in their own good time.

The head of Dogue de Bordeaux is the most important distinguishing feature. Heads are really massive! The average circumference of the broad and wrinkled head is 27 to 30 inches. The dog has a powerful and undershot jaw. The dog always has either a red or black mask on the nose, around the eye rims and on the lips. The mask, the furrowed wrinkles, the well opened nostrils and the well pigmented upturned nose gives the dog an arrogant appearance. The slightly concave muzzle is short but broad and powerful with very noticeable folds. The upper lip forms an inverted V and drops and covers both sides of the jaw. Oval wide set eyes are colored dark brown or hazel. Dogues have relatively small ears that are slightly rounded at the tip. The ears hang down the cheek.

Dogue de Bordeaux has very muscular well built bodies. The neck is almost cylindrical and covered with supple loose skin. Broad chest is powerful and deep reaching below the level of the elbows. The tail is thick at the base and tapers to a point. The rather short thickset body is covered with short, sleek and soft to the touch coat that is either fawn or gold colored.

Dogeu de Bordeaux was once a fierce and aggressive dog. Selective breeding was able to tamper this inherent characteristic. Presently, the Dogue is known to be an even tempered dog. This makes this massive dog to be an excellent family pet. A Dogue is loyal and affectionate to the human family. In spite of the ferocious appearance this breed is very gentle and playful with children. However, these are massive and powerful dogs and care must be ensured whenever these dogs are allowed to play with little children.

Their inherent fearlessness and confrontational traits coupled with their excellent watchful instinct makes Dogues good watch and guard dogs. Dogues can be very aggressive with other animals especially with other dogs. Male Dogues are very territorial and will not tolerate other male dogs. Although they will not start a fight, these dogs that appear to be calm would not back down from a fight. This is why it is imperative to socialize this breed at an early age. Dogue puppies should be exposed to other animals, to other people and to varied environments. This will ensure that the puppy will grow into a well rounded dog. Dogues are not for everyone especially for a novice dog owner. Douges would need the firm hand of a patient owner otherwise the Mastiff temperament will manifest.

Dogues are relatively inactive and will do well in an apartment. This dog is not a nuisance barker but just like other dogs that develop an extreme attachment to the human family, this dog will be destructive if left alone for a considerable period of time. This dog would need to be exercised to maintain its good physical condition. However, it should be noted that a Dogue can not tolerate heat well. High impact exercises during hot weather must be avoided.

There are actually several theories on the origin of the Dogue de Bordeaux. Some believed that this dog has the French Mastiff for an ancestor. French Mastiff is believed to be the most ancient mastiff that has descended from the Molloser dogs of Rome. The Dogue de Bordeaux like the French Molloser has massive heads. During Julius Caesars reign a dog similar to the Dogue was used in wars.

Another theory is that Dogue de Bordeaux originated from the dogs of Aquitaine. This dates back to the years 1203 to 1453 when Aquitaine was annexed to France and ruled by English kings. It was said that the cross breeding of English Mastiff and the Aquitainian guard dogs produce the Dogue. The ferocious look of the Dogue was gained when the breed was cross bred with Spanish Mastiff.

Dogue de Bordeaux has been in existence even during the fourteenth century in Bordeaux – a region in the southern part of France. This is where the dog got its name. Dogue de Bordeaux then comes in two varities, the Dogues and the Doguins. Dogues are much bigger than Doguins. Doguins are specifically bred to be used in bull or donkey baiting. Unfortunately, Doguins are no longer in existence and these dogs are only mentioned in breed history.

Dogue de Bordeaux were also classified into three – the Parisian, Toulouse and the Bordeaux. Classification depends on the region where the dogs are breed and on the specific jobs the dogs are required to do. Dogue was used as a herding dog that drove cattle and stock, as a hunter of wild boars, bears, jaguars and other big game. Later on the Dogue was trained to be excellent protectors of home and family. These dogs are most often found guarding estates of wealthy and influential French people. However, the breed experienced a setback during the French revolution. Quite a large number of these dogs were killed along with their wealthy masters. Fortunately, the dogs of the common people must have survived. The dogs were developed into powerful dogs that were able to perform the specific task they were developed for. Moreover, these dogs became loyal companions of their masters.

The World Wars tremendously decreased the numbers of Dogue. The breed almost became extinct when Adolf Hitler ordered the execution of all Dogues because of the dogs loyalty to their masters.

During the 1960s, Raymond Triquet spearheaded the rebuilding of the breed in France. The first Dogue was brought to America in the early 1890s. From then on Dogue de Bordeaux slowly gained recognition. A number of breed clubs supported the Dogue. The number of Dogues considerably increased and in July 2008 the breed will gain full AKC recognition.