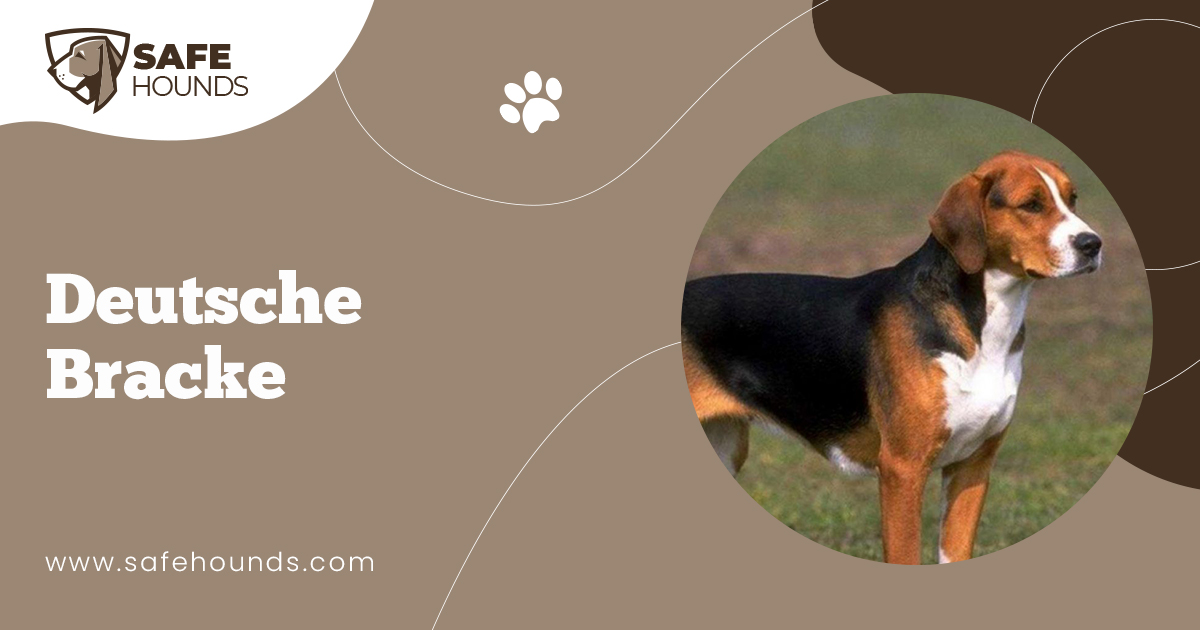 The Deutsche Bracke or more commonly known as the German Hound is a marvelous breed apt for hunting and other sporty activities. This dog breed, which originated in Germany, was produced after several years of hard work, combining different hound breeds with the purpose of creating a hound of all works. Indeed, all hard work paid-off with the creation of this very fine breed which can be suited either for hunting or merely for wanting a companion in daily activities.

The Deutsche Bracken came from a combination of the formerly popular and strong variety of Brackens melted with the local variety of Steinbracken. Since 1900, the product of these

two strong and outstanding breeds has been named the German Hound or Deutsche Bracken.

The dogs physique is fit for work and obviously shows its great abilities- fast in work, resolute, indifferent to changing weather, and most importantly, eager in almost all tasks assigned to it. With this, it is a must that the owner must always engage his dog in strenuous activities to keep the dog stimulated and working. The Deutsche Bracke does not appreciate an indoor life.

A German Hound stands at around 16-21 inches and weighs about 35 pounds. It has a sleek and short coat which may vary in color but usually comes white, tan or dark in color. It has a lightweight skull, a straight nose bridge with a pronounced stop. This excellent sensitive nose of a German Hound is one of its most important facets because of its wide range of sensation making it part of the scent hounds classification. This breed has flat, long and wide hanging ears.

This very enthusiastic breed is trained to hunt hares, fox and wild boars in the mountains. This dogs long and muscular legs give it the ability to run fast and cover a relatively large area of trails. More than that, its excellent muzzles allow it to work silently in tracing wounded animals trails. The dogs loud and clear voice is another big advantage of using in hunting trips.

The German Hound, being an active dog breed, does not require too much maintenance in grooming because of its thin coat, instead, what this dog needs is constant exercising and a pretty wide space for it to run and roam around.

The Deutsche Bracken stands elegantly yet possesses strong and sturdy quarters, fine and thin coat and a relatively thick tail. Its long and narrow head is covered with fine and thin hairs. The dogs nose is darkly pigmented with a slight strip of flesh color in the middle. The dogs lips are also darkly colored and the mouth contains strong and evenly molded incisors and canine teeth. The eyes are dark in color and project a friendly expression.

The German Hounds torso has a slightly curved back and a tucked abdomen. Its tail is remarkably thick either docked down or gently curved upwards. The tail resembles a brush like appearance because of its voluminous hair and length.

Being a dog meant for hunting trips, the German Hounds limbs are excellent. The forequarters are high and perfectly molded with lean muscles and strong bones. The elbows and shoulders are finely attached and fitted. The hindquarters are also outstanding- broadly muscled and perfectly angulated for running after preys and covering larger areas.

The Deutsche Bracke has a well defined coat- just enough to keep him sleek while in action. Its coat is hard to touch and usually dark in color. The undercoat is usually light in color and dense. There is no need for too much grooming except for the tail which is brush-like in appearance.

Just like the usual hound dog, the German Hound is used to accompany hunters in trailing for other hunt animals such as boars, hares, deer and other animals in the wild. They usually assist in chasing and looking for these animals and normally, does not recover and retrieve them.

In order for these German Hounds to perform at their optimal level, they should be exercised constantly. In fact, a daily routine of running without any leash is recommended. Through exercise, they get to practice their skills in running and chasing for preys. This also helps them tone their quarters muscles and bones.

In terms of hygiene and grooming, there is not much effort on keeping this dogs coat dirt free because its hair is not so bulky and voluminous. A simple brushing regularly will do well for the dog so that old and dead hairs could be removed. Also, checking the ear passages from obstructions is important. Keeping the dogs claws fairly long is a must because hunting dogs are meant to have one.

Training is what this dog needs, aside from regular exercise. This dog responds well during firm and strict training and can be trained at almost any weather but should be done with patience and determination because they are a little intricate to train. Training allows the German Hound to have a simulation of a hunting experience, making it more effective as a buddy during hunting trips.

German Hounds are full of energy and they would do things in order to burn up their stamina. This is one reason why there is a need for a considerable amount of space in taking care of a German hound. They are commonly calm and good tempered so they can also be kept as pets and watchdogs. They are generally friendly and not aggressive in the presence of other dog breeds. Similarly, they are good with children and do not show hostility towards them.

When commanding, these dogs are reasonably obedient and independent. Their vigilance also make them good watchdogs. Their excellent sense of olfaction is helpful in tracking down preys even in distant places.

Training these dogs might be a little uneasy but they do respond well with the masters firmness. As they are meant for hunting, these dogs are generally energetic and should not be repressed. They should be allowed to do strenuous acts so that they could combust their energy.

The German Hound is part of the Foxhound family and in fact, one of the most efficient species in terms of tracking down preys. Initially bred in Germany, they are used primarily for hunting purposes, rather than stay-at-home pets. During the early 20th century, almost all breeds of hounds were virtually extinct in Germany, with the exception of this Deutsche Bracke.

German Hounds usually have strong bones and large and wide ears which lie flat. They also have that prominent little stop in their ram-like nose. The Deutsche Bracke advanced from hot trailing Celtic hounds used for all purposes in the German forests. The Westphalian Bracke and Sauerlander Holzbracke were considered to be among the roots of the German Hound. This dog breed was produced after several years of hard work in looking for the perfect breed matches to develop a hound of all works. The creation of this hound proved that

The Deutsche Bracken club in Germany has fostered the said breed since 1896 and took several years until 1955 when they first released the written standard for the said breed. In the same year, the said breed was also drawn up in Olpe, located in the Northern region of Westphalia. This is the reason why this breed is also known before as Olpe Hound.

These dog breeds were supported in the regions of Sauerland and Westphalia. Among all breeds present in the said regions, the Deutsche Bracke was the only official Bracke supported in the whole country of Germany.