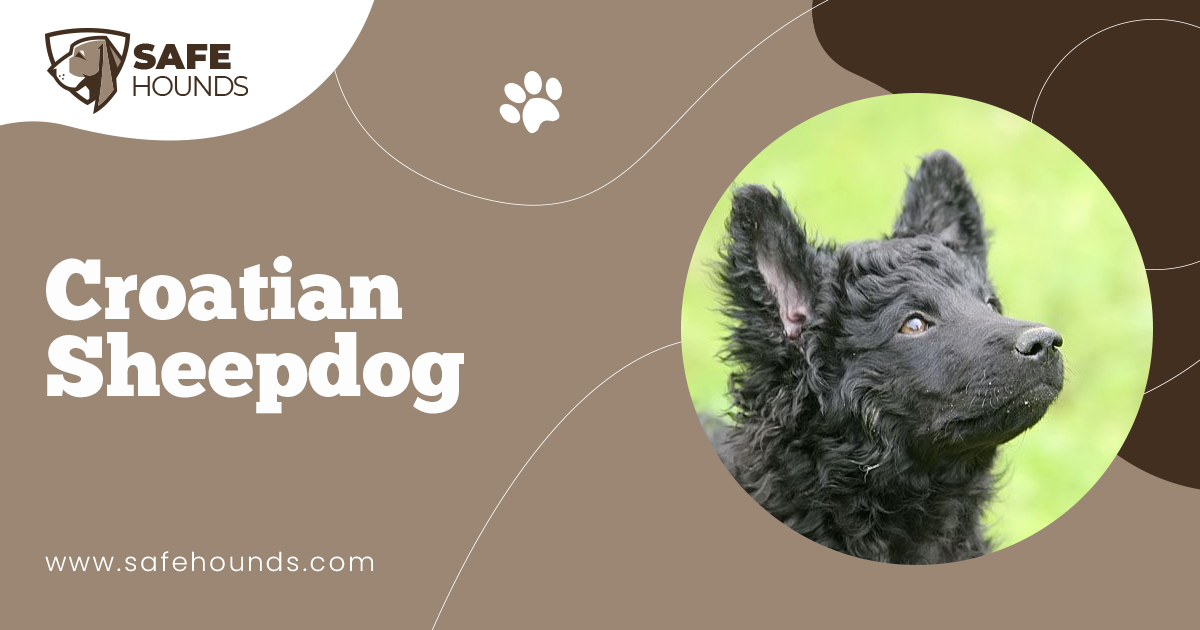 As the name suggests, the Croatian Sheepdog hails from Croatia. This is a black coated dog whose distinct feature is the short hair on the fox-like head. In bygone days, these dogs were used to herd pigs being transferred to oak woods in autumn. For its small size, the dog was utilized to herd horses from the Djakovo stables. The Croatian Sheepdog is both a gathering and a driving dog. These dogs have an inherent predisposition to work sheep and cattle. A Croatian Sheepdog is commonly seen running at the back of sheep to get to where the problem is at the shortest possible time. This small dog is noted for taming the cattle. Ever fearless, the dog would throw its small body in front of a dangerous bull to block its passage and to force it into obedience. The dog would nip the leg of the cattle without causing damage. Croatian Sheepdog owners have attested to the extraordinary sensitivity of this breed to the needs and requirements of its owner. With just a look, a hand signal or a slight movement of the head, the dog would know what has to be done and would willingly carry out the task. The dog would turn the stock to the right direction or block the stock from entering a crop field. And most of all these dogs have the ability to bring back bullheaded runaway stock.

A Croatian Sheepdog was born to work. A 3 to 4 month old puppy allowed to stay beside an older dog working the stock would learn to herd and be useful at 6 months old. Presently, more and more Croatian Sheepdogs are retired from herding flocks. Open plains in Slavonia that was once dotted with cattle and sheep are now planted with crops. The stocks are mostly kept in barns. Future for this wonderful herding dog is not bleak as they are now being utilized in other parts of Croatia and doing the job they love most herding.

The Croatian Sheepdog is a medium sized herding dog with a coat that is always black although some individuals can have small white patches on the chest and on the toes. . A distinct feature of this breed is the fox-like head that is covered by hair that is shorter than the hair that covers the rest of the body. The oval shaped skull and the conical shaped muzzle give this breed a lean wedge shaped head. The stop is slightly pronounced. The breeds nose is always black. Complete teeth are well developed and meet in a perfect scissors bite. Black pigmented lips are dry, supple and close fitting. Medium sized almond shaped eyes are chestnut brown or black in color. Dark pigmented eyelid rims tightly fits the eyeball. The eyes have a lively expression. Medium sized triangular in shape ears can be semi erect or erect though erect ears are more desirable. A Croatian Sheepdogs neck is moderately long, well rounded and muscular. The dewlap-free neck is well covered with dense hair.

The dogs short back is straight and muscular. The medium length broad and deep chest has well sprung ribs. The belly is slightly tucked up. Straight and parallel forelegs and well muscled hindquarters support the compact muscular body. The tail that is set at medium height is well covered with dense long hair. At rest, the tail hangs down or carried level with the back. On the move and when the dog is alert, the tail is carried above the back line.

A Croatian Sheepdog has a black coat. Few white hairs on the forechest and on the legs are tolerated. The hair on the foreface, on the head as well as outside the ears is always short. Inside the ears, the hair is longer. Hair on the back is from 7 to 14 cm long. Long hair at the back of the limbs forms a feathering. This breed has a dense undercoat and a soft top coat that can be curly or wavy but never wooly.

The Croatian Sheepdog is a breed with strong work ethics. This alert and energetic breed loves to work and for centuries has been the modest helper of shepherd in the plains of Slavonia. This intelligent dog has developed a strong herding instinct that makes it not only an excellent shepherd dog but an excellent watchdog as well. This is a loyal dog, one that is known to obey only one master. It gets strongly attached to its master so much so that the command of the master is often anticipated by the dog. The dog easily understands its task and acts on it with alacrity and pleasure. As well as having a strong stamina, this breed also has a strong need for human companionship. This breed thrives in the company of its human family. A Croatian dog would work the stock independently but once the task is done, the dog would constantly be at the heels of the master and would prefer to be always at the masters side. This behavior can often result to problems given that a dog that is not given the sufficient attention it needs would be bored and become destructive. Aside from having the propensity to bark, this dog is known to be wary of strangers. The dog also has a dominant behavior. Proper socialization and is very necessary for this breed. A Croatian Sheepdog can tolerate other dogs and would do well with children if properly socialized from an early age. Obedience training is necessary a well to prevent the dog from being timid and destructive. Obedience training will also curb the dogs tendency to bark. Training this dog will not be a problem as they are responsive and known to be easy to train.

The Croatian Sheepdog is an adaptable breed. As this dog has a weatherproof coat, it can live with the flock outdoors. The dog would also do well in an apartment or in a small household as long as the exercise requirement of the dog is sufficiently provided. Used to working the stock, a Croatian Sheepdog living in a city would appreciate daily long walks or playing with the kids in the park.

Croatian Sheepdog is a healthy breed that has a life expectancy of 13 to 14 years. The dog is one of the breeds that would not need an extensive grooming routine as it is valued for its working ability rather than for its physical attributes. The breed is an average shedder. Grooming routine would consist occasional brushing to remove dead hair. A very dirty Croatian Sheepdog may be bathed as long as it is not done very often so as not to remove the natural oils that weatherproof the coat.

The Hravatski Ovcar or the Croatian Sheepdog is a smallish dog that is known to be very lithe and agile. This sheepdog has a well developed herding instinct that makes it a dependable helper of farmers. Similar to other ancient breeds, nothing much is known about the origin of this breed. What is certain is the fact that these dogs were brought by the Croats from their original land when they migrated and settled in Croatia during the 7th century. From then on this excellent sheepdog has been continuously bred in the fertile plains of Slavonia.

Breeding the Croatian Sheepdog has been carried out spontaneously from the time it has arrived in Croatia. The best working dogs were selected and utilized for breeding purposes. This is probably the reason why the appearance of these dogs remained unchanged since the 14th century. Information about the breed that dates back to 1374 were found by a veterinarian named Prof Dr. Stjepan Romic. This man was considered to be the father of the breed. The Canis Pastoralis Croaticus, a document in the archives of diocese of Djakovo extensively described the breed. The document was written by Petar, the Bishop of Djakovo. The dog was described to be about 18 inches tall with a longish wavy coat, pricked ears and noted for being an excellent herder of cattle and sheep. The document also mentioned that these dogs were brought by the Croats during the Great Migrations. Other documents from the years 1719, 1737, 1742 and 1752 were found in the archives of the Djakovo diocese. All descriptions of the breed in the documents perfectly matched the appearance of the modern day Croatian Sheepdogs although present day dogs are taller. This can be attributed to better nutrition and easier life. In all the documents the dogs were called Canis Pastoralis Croaticus. In 1935, Prof. Romic started a systematic selective breeding program from dogs found in the Djakovo territory. After 34 years of dedicated work, the Croatian Sheepdog was officially recognized by FCI.

The Croatian Sheepdogs possess a natural instinct to herd cattle and sheep. This breed has a stable population and well appreciated in its country of origin although it is not well known in other countries of the world.