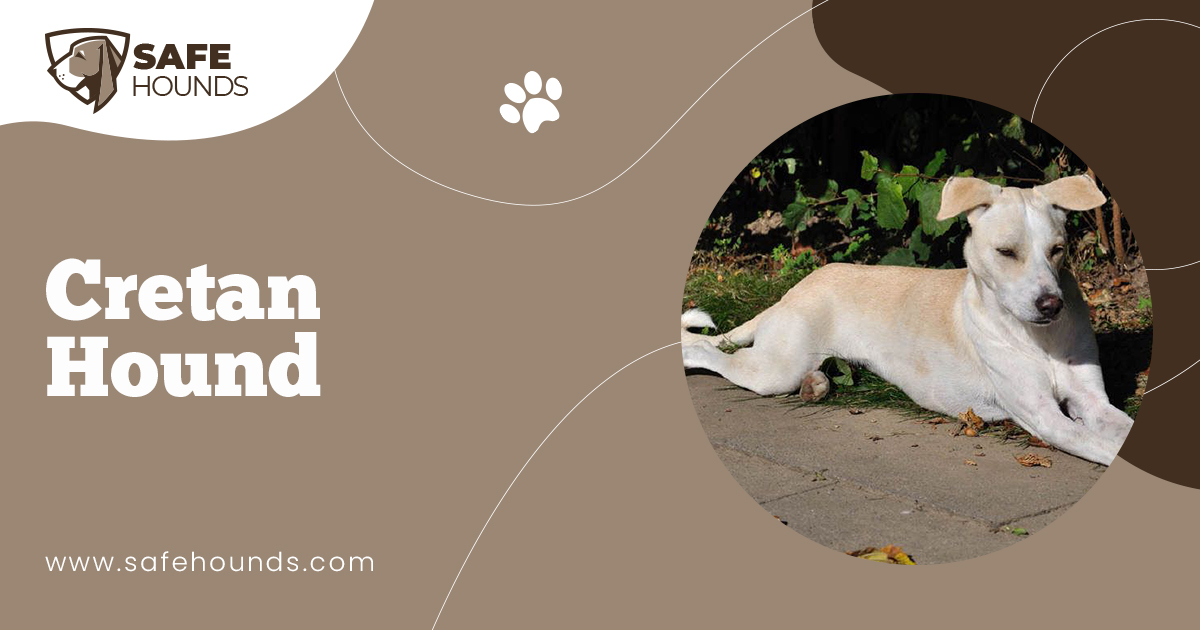 The Cretan Hound also known as Kritikos Ichnilatis is believed to be one of the oldest breeds of hunting dog in Europe. This breed that hails from the island of Crete has a history that dates back to 4000 years ago. This breed was developed and utilized by the Cretan people since the Minoan civilization for its excellent hare hunting abilities. This breed was born to hunt. Both a scent and a sight hound, this dog with peculiar hunting traits would be a joy to watch while trailing its prey. This ancient chasing hound is pricked eared and smooth haired. The well developed muscular body and the long sturdy legs give the dog a fast gallop, nimbleness, agility and swift reflexes. This dog has adapted to the rocky ravines and harsh mountain terrain of its birth place. The dog will literally suck the scent of the prey from the ground, follow the trail and flush out the prey from its den with great tenacity. A hound that becomes rigid with the tail moving in circular fashion is a sign that a chase is about to begin. Unlike other hunting breeds, this dog does not give voice while hunting. It uses body language instead. The wagging of the tail, the way the ears are positioned and the facial expression would show the human hunter the progress of the hunting process. This breed will willfully hold on and patiently wait until the hare or the rabbit comes out from its shelter. This breed is an excellent ratter. It rids the farm and the home of mice and rats. Because of a high prey drive, the dog will hunt feathered game as well although the breeds hunting abilities will come to the fore if it will be made to indulge in a good chase. This brave and tireless hunter is full of dash and vigor when hunting but the dog is docile, calm, obedient and well mannered inside the home truly the perfect home companion

The Cretan Hound is a primitive chasing hound whose stature is akin to that of a sighthound and a scent hound. This breed has an elongated wedge shaped head and a broad slightly rounded skull. Wedge shaped muzzle with a straight nasal bridge tapers to the large moist nose with wide open nostrils. Nose color can be black, brown and deep chestnut. Medium sized almond shaped eyes have dark colored irises and well pigmented eyelids. Medium sized triangular ears are erect. Broad at the base, the high set ears are slightly rounded at the tip. A Cretan Hound has very mobile ears. Depending on the situation and on the emotion of the dog, the ears are either folded down or turned to the sides. Ears are folded backwards during a chase.

A Cretan Hounds dry and muscular neck is slightly arched at the base and sits on muscular shoulders. The dog has a lean but muscular long body. The chest is of moderate width, rather deep but not reaching the level of the elbows. The muscular straight back is strong. The rather short but powerful loin is muscular, dry and with a good tuck up. The tail that is set quite low does not reach the hocks. The broad based tail tapers towards the tip. Longer hair that covers the underside of the tail forms a brush. At rest, the tail hangs downwards. On the move, the tail is carried upwards forming a tight or loose ring. A Cretan Hound has a fine taut skin and a fine, smooth and straight coat that varies in length throughout the body. The head, the ears and the underside of the body is covered with very short fine hair. The sides of the neck, the buttocks and the tail are covered with longer hair. Coat colors range from pure white, sandy, cream, green fawn and black or brindle. Some specimens have bi-colored or tri-colored coats.

A Cretan Hound has adapted to the wide and open spaces of the rocky and mountainous terrain of the Crete Island. This breed is not suitable for apartment living as it would need sufficient space outdoors to ensure that the dogs extensive exercise requirements are met. This breed is an active and relentless hunter but it is known to behave differently inside the home. A Cretan Hound makes a wonderful home companion because of its stable and well balanced temperament. This dog is gentle and affectionate with children. This is an intelligent and attentive breed. Obedience training will not be a problem as the dog manifests an eagerness to please attitude. This breed has an amiable temperament with other dogs but it cannot be trusted with smaller pets because of its high prey drive. This dog will instinctively chase rabbits, cats and other small animals.

The Cretan Hound is a short haired breed. It is also an average shedder. This breed would not need an extensive grooming routine. A firm bristled brush occasionally used on the coat will maintain its good condition and will help distribute the natural oils that moisturize the skin. Being a hunter, the dog can get very dirty and smelly. The dog can be bathed using a mild soap. The feet, the mouth and the ears must be regularly checked and cleaned. The nails must be regularly trimmed as well. The Cretan Hound is a fairly healthy breed with very few health concerns. A premium quality dog food is essential for this breed and so is regular exercise.

The Cretan Hound is believed to be the oldest dog breed in Europe. This chasing hounds existence in the prehistoric settlements of Crete predates the Minoan civilization. Ancient writings and epic poems of Homer have specifically mentioned the Kressai Kynes or the Cretan Hounds. Artifacts dating back to at least 3500 years have documented this breeds existence in the Greek island of Crete. It was described in Greek mythology that Dias, the father of the gods happens to fall in love with a princess from Asia Minor. Dias transformed into a white bull and carried the princess on his back and crossed the sea to bring his beloved to the island of Crete. Three semi-gods resulted from the union, one of which is Minos, the first king of Crete. It was believed that the Great Goddess brought many goods to Crete. Hounds were brought as well. In fact a prehistoric find depicted the Great Goddess on the stern of a ship with Cretan Hounds by her side. This metal piece is displayed in the Heraklion Museum.

The Cretan Hound is a coursing and tracking hound. The breed is described by classic authors as an incomparable hare hunter the best hunter of hare known to man. It was believed that ancestors of these hounds came from Africa. Both a sight hound and a scent hound, the Crete Hound has adapted to the harsh terrain of the Crete Island. Crete is an isolated and remote island that is the natural habitat of rare species of animals such as the lynx and sub species of wild goat. For thousand of years, the Cretan Hounds that have been chasing hare and wild rabbits during the ancient times have not changed form. This bred is considered by breed enthusiast to be a living relic as the ancient murals, sculptures, ornamental objects, stamp objects depicted a Cretan Hound in the same form of the present day Cretan Hounds. The Cretans are peace loving people made suspicious and wary by the invasions of enemies. These people have been honed by time to be independent and stubborn. Even to this very day, Cretans refuse to give their dogs to outsiders. The best specimens are in fact hidden from outsiders. The ruthless breeding practice of killing dogs wanting in hunting abilities have ensured that the Cretan Hounds although small in number possess all the outstanding qualities of an excellent hunter. Cretan Hounds rarely leave the island. The only chance dog lovers meet this living legend is when they are made to participate in international dog shows.