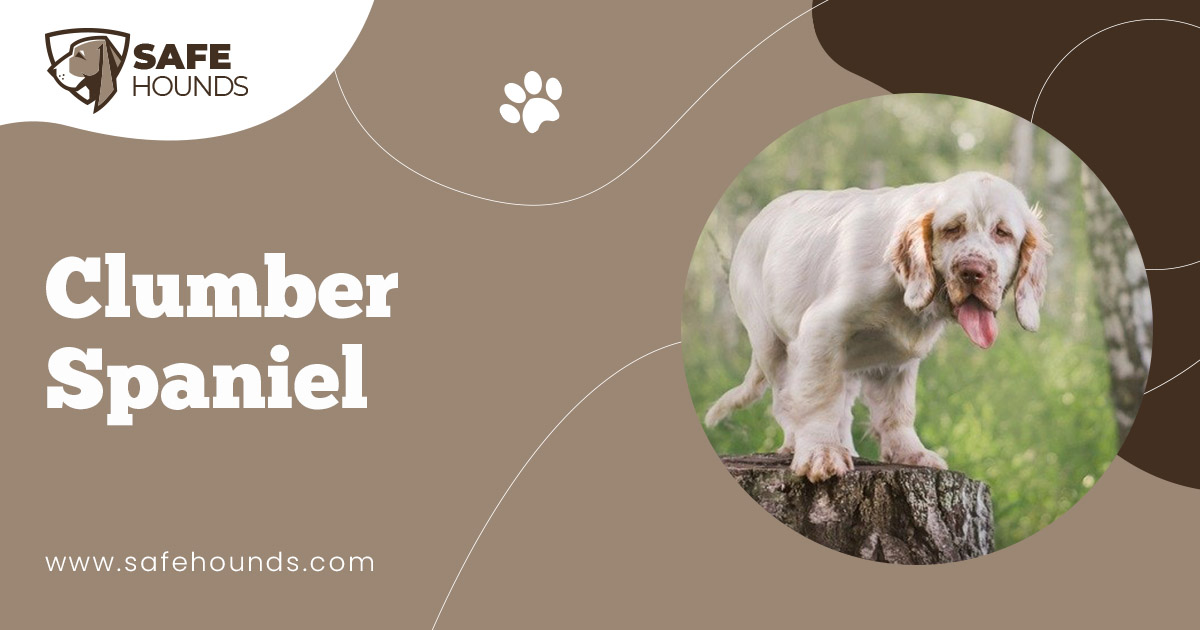 The Clumber spaniel when you first see him you may think they are slow and cannot move fast. They will surprise you because they move quickly when they need to. They are not the fastest of the spaniels, but they are quick and they are the biggest of the spaniel breed. This dog is an excellent hunter and its flushing and trailing is unsurpassed by its retrieving abilities that make him a great hunting dog.

They are a loyal pet who loves his family. He will be devoted to you until the day he dies. They are very affectionate and their facial expressions give him a look of nobility. He may seem standoffish at times, but he will never be hostile or mean to you. He loves children and he will get along with other dogs seemly well.

He has a silky coat that is of medium length. They are usually white with lemon or orange markings all over their body. They may have different markings around the eyes or have a completely white face altogether. Freckles are very common on this breed on the feet, muzzle, and ears.

The Clumber Spaniel is a great pet for the elderly and can be lazy, but as soon as you grab the leash, they are right there to go for a walk with you.

The appearance of the Clumber spaniel is pretty simple. You may think of the normal spaniel, but you are totally wrong. The Clumber is a Spaniel that is low to the ground and kind of long. In addition, the body of the Clumber is heavier and can be kind of fat looking. The Clumber has a hound like expression on its face, it has a deep muzzle, a large kind of square nose, and its ears are low set and have kind of a flop to them.

The coat on the Clumber is very dense and weather resistant. Their coat is feathers fur. Their fur is thick, straight, and silky. The color of their coat is mainly all white, but can be seen with lemon or orange colored markings as well. Their tail also has feathered fur on it and the Clumber Spaniel normally has a docked tail. However, in Europe it is illegal to dock their tails. The shortness of this dog gives it somewhat of a wobble type walk, which is very adorable to watch.

The Clumber is heavy in its appearance and is longer than it is in its height. The dog only stands about 20 inches high and is longer in length. The face of this adorable dog gives off a sweet impression. This is a great reason many older adults love to have this dog around. This dog moves at a slower pace than normal dogs and is perfect for an older gentleman or an older woman.

The personality of the Clumber is a perfect personality for anyone. They are very loving, sweet, playful, intelligent, easygoing, pleasant, and well-behaved type of dogs. The Clumber gets along well with other dogs, cats, and other household pets if they are raised with them. The Clumbers are also pretty good with children, but do not take good with strangers. This breed is meant for a gentle type person and should not be heavy handed disciplined.

This breed loves to please its master so they are pretty easy to train. they tend to be very smart and learn quickly. The main reason is they love to please their masters and receive praise for a job well done.

This breed tends to gain weight very easily. They like to go swimming and playing fetch, so giving them exercise will be pretty easy to do. It is best to take them out for a walk during the early morning hours or late in the evening on hot days, as they prefer cooler weather. When walking them try not to jog with them on pavement, it can hurt their pads.

The coat on this breed needs to be brushed or combed regularly. Some trimming of their coat is also necessary but also on an as needed basis. Make sure to check their ears and eye regularly. Their ears tend to become irritation, which will require a lotion, which you can find at your local vet. If your Clumber Spaniels has a lot of hair under the ears it will need trimmed. If you do not wish to go to the groomers, you can snip this hair rather easily. Otherwise, this is all you mainly need for taking care of the Clumber.

The Clumber spaniel was developed in France in 1768 and named for the Clumber estates by one of the dukes of Noailles. The Duke of Noailles transferred his dogs to England when they were threatened by the revolution. There have been several monarchs who have bred the Clumber Spaniel, which included Prince Albert, King Edward VII, and his son King George V. The spaniel was used for hunting in packs as well as alone.

Even though they are the slowest of the spaniel breeds, they are a great hunter with the perfect nose to find their prey fast. They have great stamina even thought they are a larger breed and thick built.

There is not much documentation on this breed, however, many people think that St. Bernards and bassets had a lot to do with contributing to the Clumber spaniel that we all know and love today.

The Clumber spaniel was the only hunting dog that could move through very dense and thick brush with out hurting himself. This made it so much easier to get their prey that the gentlemen started using these dogs more in the thick brush and the other spaniels in the open fields where they couldnt get tangled up in the thickets. The Climber would not give up as easily as the others would. He would keep going and if he had no scent of a bird, he would move onto a different part. The other dogs would give up a lot easier than the clumber did. This is another great trait of the clumber and made them more useful to the gentlemen who needed to get their limits.

There was not any information on the water type of this breed but the Clumbers are excellent swimmers. If their prey fell into the water they were on top of it as if it were on land. They have the heavy undercoat, which protects them from very cold water. This is an asset for the hunters because there were times they needed to break the ice to get their prey and the Clumber could do this easily.