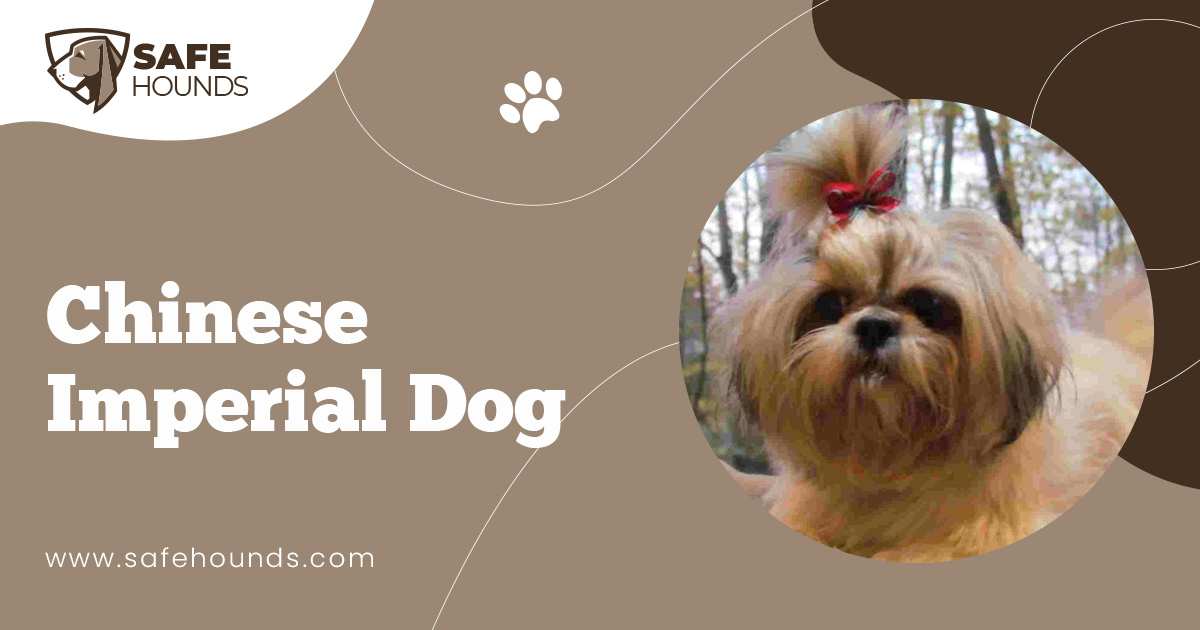 A cuddly stuffed toy dog is displayed on top of a coffee table. The dogs hair is secured with a small red bow on top of the head. The doll like face with its black round eyes and black button nose has a sweet, wide eyed and friendly expression. Cute! And then the toy suddenly moved to jump on the lap of the lady sitting on an armchair. So the toy dog is a real dog after all. The dogs compact and well muscled body is covered with a straight and luxurious hair. The toy dog turned real dog is a Chinese Imperial Dog.

The Chinese Imperial Dog is one of the toy breeds that originated in China. This breed was developed in 700 AD. This breed is considered to be a temple dog given that during those times, these dogs are kept inside the place and ownership is restricted only to the royal family. Edicts pertaining to the care of the dog were issued by the Dowager Empress Tzu Hsi who was a lover of dogs. These dogs were originally bred to be companions and feet warmers. A Chinese Imperial Dog is often seen being carried on the sleeves of the rulers kimonos. For centuries, these dogs have lived in the inner courts of the palaces being the affectionate companions of royalty and being well cared for the eunuchs.

Keeping toy breed has become a fad. Electric blankets and temperature controlled homes made the usefulness of the Chinese Imperial Dog as a foot warmer redundant. However, even during the ancient times, these dogs have been outstanding companions because of their affectionate, outgoing and playful temperament. This is an energetic dog but it would love to stay quietly on the lap of its favorite person for hours. The Chinese Imperial Dog is a fairly healthy breed. The dog has no major health problems but because of the small size, the dog is prone to hypoglycemia. This breed has a life expectancy of 10 to 15 years.

The Chinese Imperial Dog is a small breed of dog with a compact well muscled and well boned body. This breed has a distinctive large round head that is carried high above the shoulders. This dog has a domed skull and a wide and short muzzle that is about 2/3 of an inch in length. Large round eyes are set well apart. This breed has a wide eyed, sweet and trusting expression. Well furnished drop ears are set above eye level and a little below the top of the skull. Longish hair on the ears forms natural ear fringes. The nose that is fitting to the size of the face usually has black pigmentation. A Chinese Imperial Dog has a sturdy, long and graceful neck that blends smoothly into the well laid back and well angulated shoulders. The dog has a sturdy short coupled body, a straight and level topline and a broad chest with well sprung ribs. Rib cage extends to the level of the elbows. The high set tail has a flowing plume and carried over the back in teapot handle style. Well boned and muscular forelegs are set well apart with the elbows close to the body. Muscular and straight hindquarters have well bent stifles. Feet are firm and well padded. The Chinese Imperial Dog is a double coated breed. The dense luxurious coat gives this breed an endearing and striking appearance. The hair is usually straight though some specimens can have a wavy hair. Coat colors range from auburn, copper, champagne, black, chocolate and cinnamon. A Chinese Imperial Dog usually sports a short to medium simple cut.

A Chinese Imperial dog is an ultimate home companion. The dog has a sweet, affable and cheerful nature. Its playful and vivacious temperament makes the dog an ideal playmate of the children. However, because of the small size, kids must be cautioned to be careful with the dog as it can be inadvertently hurt by a boisterous child. A Chinese Imperial Dog is an energetic breed but it can be calm and lie quietly for hours on its masters lap. The dog is suitable for apartment living. Owners though must keep in mind that the dogs exercise requirement must be met. No matter how tempting it is to cuddle and carry these lovable dogs, they must be allowed to walk to satisfy their basic canine instinct for walking. Owners tend to pamper these dogs but it is necessary to be the dogs pack leader. Giving in to the whims of the dog can lead to the development of behavioral problems.

The Chinese Imperial Dog makes a wonderful pet but the dog is valued for its impressive appearance. Ownership of this type of dog has become a status symbol in recent years more so when celebrities have taken to keeping these dogs. A Chinese Imperial Dog, especially those that are kept for the show ring would need extensive grooming and maintenance. Aside from the usual nail clipping and ear and teeth cleaning, the coat must be trimmed every six weeks as the puppy cut must be maintained. These dogs would need additional nutritional supplements. Some of these dogs would even need to be hand-fed.

The Chinese Imperial Dog originated in China in 700 AD. It was believed that this breed of small dogs was developed in the Imperial Palace of China as ancestors of this breed were given as a gift to the emperor during the Manchu dynasty. These small dogs were called Imperial, Hah Pah and Chin Ssu Ha-Pah for dogs with solid colored coats. In ancient China Imperial dogs were considered holy as it was believed that these dogs were bred in the likeness of the lion that Buddha rode when he came to earth from heaven. These dogs were only owned by the Royal family. The Chinese Imperial Dogs were considered as temple dogs and were kept inside the palace all the time thus the dogs were unknown outside the Imperial Palace. For centuries, these little dogs were protected by Imperial orders. Commoners were ordered to bow down to the dog. Unlawful ownership of these holy dogs is punishable by death. Court eunuchs were given the task of guarding and caring for these dogs.

In 1861, the royal concubine became the empress of China. It was a common knowledge that Empress Tzu-Hsi has great love for animals. The Dowager Empress is particularly interested in dogs. One of the first edicts of the new Empress concerns palace dogs. She has ordered that under no condition should the dogs be tortured. To ascertain that the dogs are properly cared for, the chief eunuch was designated to be in charge of the breeding program that under her direct supervision. Selective breeding is done to maintain the ideal size of the Chinese Imperial Dog. An Imperial that is too large is put to death. However it was believed that puppies that the Empress finds undesirable are sold by the eunuchs outside the palace.

The Chinese Imperial Dogs are specifically developed to be loyal companions. These dogs go wherever the master goes. Carrying these dogs on the sleeves of kimonos has become a fashion during those days. The Chinese Imperial Dogs were introduced to the western world after the death of the Empress Dowager in 1908. The young Emperor and Empress did not share the Dowagers interest for the Imperial dogs. The dogs were given as gifts to England and Netherlands nobility.

The Chinese Imperial Dog is a separate and distinct breed from the other Chinese toy breeds but during the ancient times, these dogs were considered to be of the same breed. This is due to the fact that the Lhasa Apso and the Pekinese were developed alongside the Imperial dogs. The Shih Tzu was developed later. It was even believed that the larger Imperials have developed into a distinct breed which is the Shih Tzu. When these dogs entered foreign soil, the Shih was has gained more recognition. A standard was written for the breed in 1938. Due to the lack of knowledge about the breeds, the Imperial was classified as Shih Tzu. The Chinese Imperial Dog was separated from the Shih Tzu and considered to be a distinct breed by the NCA on March 2005. The breed gained acceptance from the NKC, CPR and UABR in 2006.