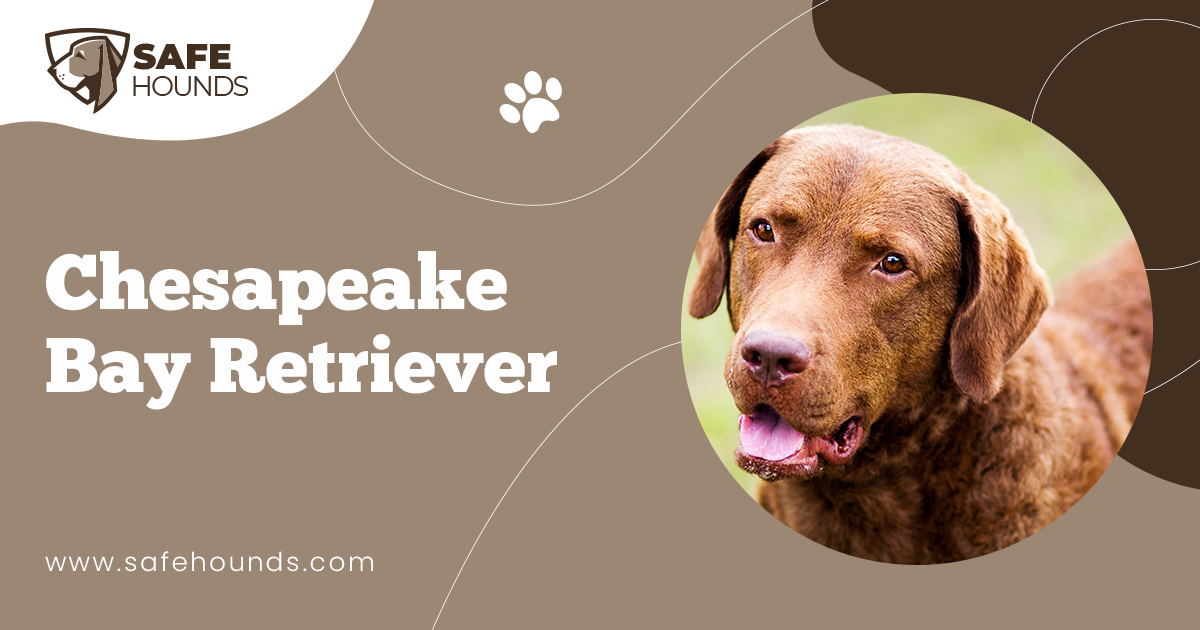 The Chesapeake Bay retrievers are used today in hunting tests, field trials, obedience, agility, and tracking. They may be used for all this and more, but this breed of dog stays true to where it comes from for hunting and protecting.

The Chesapeake Bay retrievers have been called Chessie by individuals throughout history, such as a short nickname. These dogs may also be called Peake Pups and Bay. You can see these beautiful dogs in practically all AKC dog shows across the United States under the gundog category.

The Chesapeake Bay retriever can be seen in many colors. The colors mainly range in shades of browns anything from a light coco brown to a dark deeper brown. The color of the dogs coat can also range from a reddish yellow to a bright red and to a chestnut color. There are some Chesapeakes that may have white on their coats, but it is limited to places such as the breast, belly, toes, or the back of the legs. The coat on the Chesapeake has an oily touch, which helps propel water from the dog while hunting in the waters. The Chesapeake does not shed that often, so brushing shouldnt be needed very often.

Another great thing about the appearance of the Chesapeake is that they have very broad and tough chests that are made for breaking through ice while hunting in winter waters or cold climate regions. The Chesapeake dogs also have tough and high hindquarters that are also used greatly for hunting as well.

The Chesapeake has a wonderful personality, which makes for a loving companion for anyone. This breed can be very happy and sometimes when happy they can get vocal that might be mistaken for the dog to be growling, but they arent. They also may smile at you. This is where the dog may bare his front teeth, but again, this is not a threatening thing for this dog.

When having a Chesapeake Bay retriever it is better to have only one Chesapeake in the household because of their dominance. This breed is protective, but will not be the first to start the fight. This breed of dog is good with families as long as they are raised with the family and so the dog will know them as the dogs master. The Chesapeake is very good with children, so you should not have any worries about the dog being around kids. The Chesapeake is also good with other dogs and loves having people and dogs around them to play with, but remember since he is a bit dominant another Chesapeake Bay may be a huge mistake.

The Chesapeake is very easy to care for. With its oily coat, the dog should not be bathed very often. Bathing will strip the oil from the dogs coat. The oil is what the dog needs when hunting in the water. When brushing the dogs coat, make sure to use a firm bristle brush. You should only brush his coat during the time when he is molting. Brushing should be performed to get the loose and dead hairs off the dog.

The Chesapeake is the type of dog that does not like to be left alone for long periods of time. If this happens, the dog may become destructive, so give him plenty of attention and exercise. His favorite type of exercise is swimming, therefore take him on the next family picnic by the lake instead of leaving him at home to get into mischief.

The Chesapeake got its start on the coast of the state Maryland. Back in 1807, a ship was wrecked on the coast of Maryland. On the ship were two Newfoundland puppies. The male puppy, Sailor, was red in color and the female, Canton, was black in color. The male went to John Mercer of West River, Maryland and the female went to Dr. James Stuart of Sparrows Point, Maryland. Both men were very big hunters of waterfowl and this is where the dogs started their hunting lives. Before long, both men realized just how great these dogs were for hunting.

By the late 1800s there was much enthusiasm for these hunting dogs which brought about the showing of the Carroll Island Gun Club which brought dignitaries from across the country to shoot and watch the dogs do their stuff. The club members bred the Chesapeakes and the dog held the pedigree of the Chesapeake Bay Dog for several years forward.