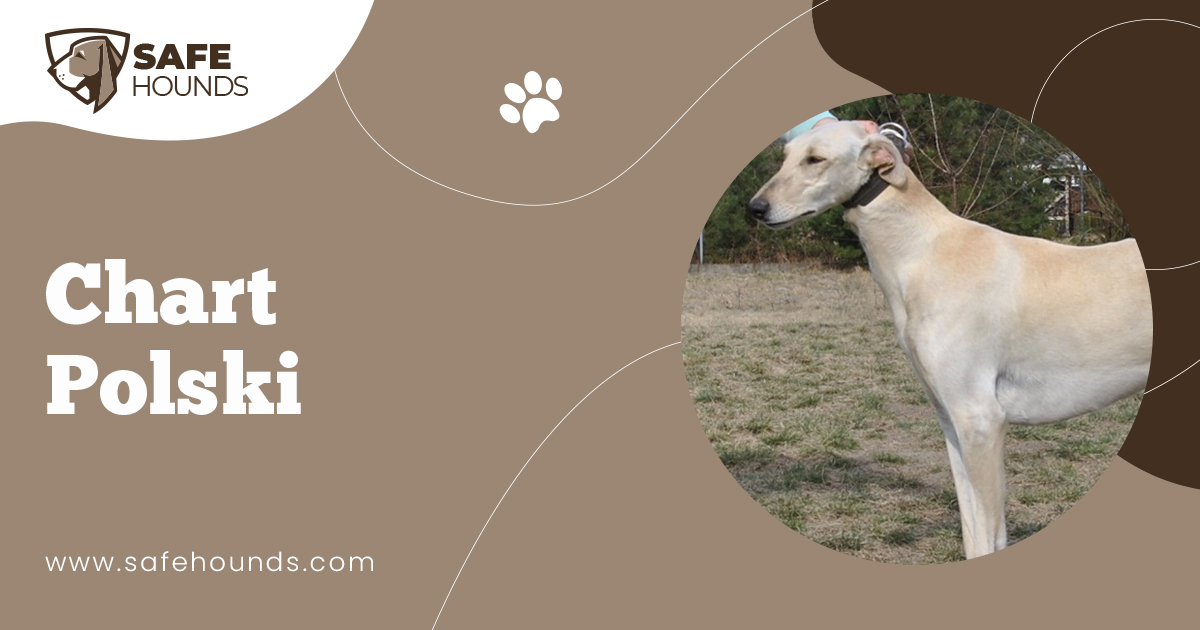 Chart Polski, pronounced as Hart Pole-ski is a large breed of dog that originated from Poland. This breed is also known as the Polish Sighthound and the Polish Greyhound. A Chart Polskis built is similar to that of the Asian Greyhound, its ancestor. The dog has powerful bones, a well muscled but compact body as well as strong jaws. Being a sighthound, a Chart Polski has an alert, piercing and sharp expression. This is a very fast, agile and relentless dog. The fluid springy gait, the intelligence and cunning that enables the dog to react confidently and quickly to a given situation while hunting as well as the outstanding physique enables the dog to excellently hunt deer, wolves, bustards, foxes and hares in the varied climatic conditions and difficult terrain of Poland.

Hunting was a famous sport in medieval Poland. Because of the outstanding hunting ability the Chart Polski breed was among the sighthounds favored by Polish nobility. A Chart Polski is tough, tenacious and hardy while hunting. This dog though can be very gentle and good tempered with its human family. From being an excellent and skillful hunter, the dog has evolved into a wonderful and affectionate family companion. A Chart Polski forms a strong attachment with the human family. The dog has the tendency to protect its family and its territory. It is extremely reserve with strangers. Because of this, socialization and obedience training is necessary. Training a Chart Polski would not be hard as this breed is responsive to training. However, training must be consistent, firm and done in a gentle but authoritative manner. Harsh treatment should be avoided as it will have a negative impact on the behavior of the dog. It is possible that the dog will be aggressive, stubborn or extremely shy.

A Chart Polski is a slow growing breed. It would take at least 3 or 4 years before the dog will fully mature physically and mentally. This means that a female Chart Polski should not be mated before it is three years old. Average lifespan of this breed is from 12 to 15 years.

The Chart Polski is an athletic breed of dog that was primarily developed to chase small and large game in the flat steppe lands of Poland. At a glance, you will at once notice the strength, the power and the endurance of the dog. The dog stands approximately 28 to 32 inches measured from the withers and has an average weigh of 50 to 75 pounds. The dog has a square appearance given that the length of the body is almost the same as the height.

A Chart Polski has a narrow but a pretty long skull. The top of the skull is flat and the long muzzle tapers to a black or a dark big nose that project over the dogs lips. The jaws may be narrow but they are powerful. The teeth meet in a scissor bite. Large eyes are expressive, the color of the iris would depend on the color of the coat. Narrow medium sized ears are set at eye level. An excited Chart Polski would have an erect ear, ear would be held low and flopped over if the dog is at rest.

A Chart Polski has a level topline, a deep chest and long ribs. The chest had to be deep to hold the large lungs which allow the dog to run at great speed for miles without tiring. The dogs belly is tucked up. With a deep chest and the tucked up belly, the Chart Polski is one athletic specimen of canine breeds.

A Chart Polski has an elastic and well fitting skin covered with a rather harsh to the touch hair. Hair that covers the body varies in length, shortest on the sternum and on the legs, longer on the withers and sides of the body and longest on the buttock and the underside of the tail. These dogs have very long thin legs and takes high steps when walking so that the dog would appear as if marching. This kind of trotting movement of the dog is called lacing.

A Chart Polski has the qualities that make it an excellent sighthound. This dog however has evolved into an excellent companion and has found a niche in the home of dog lovers. This is a very loyal and loving breed, one that would readily demonstrate its affection to all the members of the family. These are fun loving and lively dogs and having a Chart Polski at home means providing your children with considerate and gentle playmates. The dog is good tempered but is known to be protective of its human family. Apart from being wary of strangers the dog is also territorial. It would protect the family and the property at all cost.

The dog may tolerate other dogs if raised with them while still young otherwise the Chart Polski can be very aggressive and would show its dominance over other dogs and animals. This breed has the tendency to chase other peoples pets. Oftentimes the dog is the cause of altercation between neighbors as the dog is very fast and can always overcome the neighbors pets.

Being active dogs that are accustomed to hunting the prairie land of Poland, the Charts Polski would need an adequate space to exercise. This breed would do well in a home in the rural or suburban areas and with an athletic and active family.

Owners of Chart Polski are fortunate to have a good tempered and loyal dog that would need very minimal maintenance. This breed is easy to care for. Brushing the coat every week would be sufficient to maintain the good condition of the coat. The dogs nail though must be regularly clipped and the ears regularly cleaned. The dog must be bathed only when very necessary.

Sighthounds are believed to have existed in the 12th century in Poland. Hunting was a very popular sport in Medieval Poland. Noblemen would usually use sighthounds or a combination of sighthounds and falcons to hunt. Although there is no conclusive evidence, the Chart Polski is believed to have descended from the Saluki and from other types of Asiatic sighthounds. The Chart Polski was described in detail in the book Riding and Hunting written by Gostomski. The book was published in 1690. It was speculated that this breed was developed from the English Greyhound Borzoi. However this speculation was contradicted by the book Les Distendes Levriers written by XavierPrzezdziecki in 1984. The book states that while the English Greyhound is being developed in England, the Poles are also developing a sighthound that will be capable of hunting hares, wolves and foxes in the extensive steppes of Poland.

In a 19th century hunting literature the name Polish Greyhound was frequently mentioned. The dogs picture as well as detailed information on the breeding and training for hunting was published in a Warsaw magazine. 19th century Polish works of art done by A. Wierusz-Kowalski, J. Kossak and J.Brandt featured the Polish Greyhound.

The life of the rich and the landowners was totally changed after the 1st World War. Vast private lands were broken up, the landowners parties and the ownership of pack dog for coursing was highly criticized. The Poles were not yet accustomed to this new era when the 2nd World War happened. The large manor houses, the properties as well as the kennels were abandoned. The sighthounds were allowed to roam. The peasants utilized these sighthounds to survive. These excellent hunter have provided food for the peasants tables. After the war the existence of these sighhounds became more difficult. The dogs are the symbols of the rich landowners exploitation and as such they must disappear. The dogs were killed by hunters and the militia.

In 1972, interest for the breed was revived when Dr. Mroczowski wrote an article about the Chart Polski. He appealed to the people to support the revival of the breed which is considered to be a cultural heritage. Malgorzata Szmurlo and Isabella Szmurlo, a brother and sister team has made enormous contribution to the revival of the breed. They searched the countryside for perfect specimens and founded the Celerrimus kennels, the kennel that has made an important contribution to the recreation of the Chart Polski. In 1981 a studbook for the Polish Greyhound was opened and in 1989 the breed standard was accepted by FCI.

Hunting with the Chart Polski is now banned. The breed though is gaining popularity in track racing and coursing. Because this is a well mannered breed, the Chart Polski has evolved into a wonderful companion and affectionate family pet.