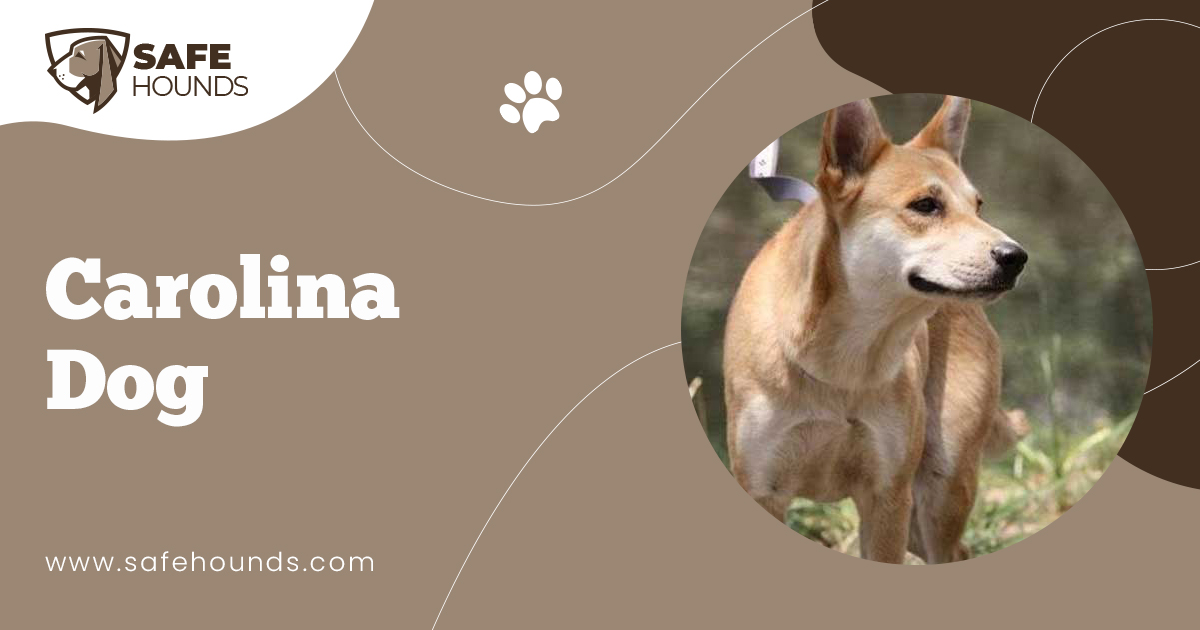 The Carolina Dog is one of the primitive free living animals. These dogs that appear like a small Dingo were discovered in the 1970s. These free ranging animals have existed in the savannahs, in the swampy areas and in the forests of Georgia and South Carolina for thousands of years. It was speculated that these medium sized dogs have developed from the dogs brought along by Paleolithic hunters when they crossed the Bering Strait land bridge from Asia to North America during the prehistoric times. Similar to the Thai Ridgeback and Africas Basenji, the Dingo and the Canaan Dog, the Carolina Dog is considered to be a pariah dog as well. Pariah means a social outcast in the Indian caste system but it also refers to primitive or ancient dogs that have retained their original state of being. This means that all through the dogs existence it has not deviated far from the original stage when it was developed. The Kentucky Shell Heap Dog and the Basket Maker Dog are other ancient pariahs found in the North American continent.

The Carolina Dog resulted from natural selection. These free living dogs have survived and developed without human intervention but it was proven that these dogs have the capability to adapt to domestication. These dogs have the unique habits of primitive dogs. Extensive studies on this breed have disclosed that Carolina Dogs communally raise their pups, they have a well defined hierarchy and they hunt together using strategic hunting methods. These dogs are otherwise known as Indians dogs because they have been used by Native Americans to herd livestock. These dogs are noted for their well developed hunting abilities too. These dogs also have the characteristics of a loyal and loving pet.

The Carolina Dog is a medium sized dog that has a general appearance of a wolf or a small jackal. This breed also resembles a sighthound. A Carolina Dog may appear to be thin but this is a hardy breed, capable of surviving in the wild, in the harsh environment of its natural habitat. The dog has a strong, straight topline and a broad chest that provides ample room for the lung and the heart. Deep brisket reaches the level of the elbows. The waist has a definite tuck up. A Carolina Dog has a graceful long swanlike neck that blends harmoniously into the shoulders giving the head a lofty carriage. The strong moderately rounded skull is broad between the ears. This breed has a slightly rounded forehead and a distinct stop. The muzzle tapers to the large black nose with well opened nostrils. Jaws are powerful and deep. Tight fitting black pigmented lips enclose complete white well developed teeth that meet in a scissor bite. Almond shaped eyes are set obliquely. The dogs eyes give the face an intelligent and soft but highly cautious expression. The Carolina Dog has very mobile ears. Triangular shaped ears have slightly rounded tips and are fine in texture. Ears are set well on top of the head, pricked when the dog is alert and folded back along the neck when the dog is at rest. One pricked ear and the other very mobile to pick up sounds is a trademark of this primitive breed. The tail similar to the ears is another expressive body part of the dog. The tail has slight brush but lushly covered with hair on the underside. The fish hook tail that is distinctive to this breed is carried in different positions that signify the mood of the dog. This breeds pliant but not loose skin is covered with short thick coat. In colder months, the dog grows denser undercoat that is shed in summer. The neck, the withers and the back are profusely covered with longer hair that stands erect when the dog is aroused. The usual coat color of a Carolina Dog is deep red ginger. Pale buff markings may be present on the sides of the muzzle and over the shoulders.

Before the Carolina Dogs were discovered in the 1970s, these dogs have lived freely in the remote areas of South Carolina. These primitive dogs though are not feral. When the dogs were domesticated their well balanced temperament came to the fore. Carolina Dogs are pack oriented thus they bond strongly with the family they consider as their pack. These dogs love being made a part of the family activities. A Carolina Dog would bask in the attention showered by the family. The dog is gentle and patient with children. Because of its sociable nature, the dog tends to get along well with other animals. When brought into a household with established pets, the dog would easily adjust and be submissive to senior dogs of the family. The dog does not have a very high exercise requirement. A daily long walk would be sufficient to maintain its physique and to keep the dog mentally fit. Carolina Dogs though are free ranging dogs. The dogs would not do well in apartments. These dogs are not yet fully domesticated and would yen for the outdoors. An owner should remember that the dog has the inclination to escape thus a well fenced-in yard will be necessary. The dog must also be leashed when taken in public places.

The minimal grooming necessary is another plus factor for opting to have a Carolina Dog for a pet. These are very clean dogs. In the wild they bury their feces. These dogs are naturally obedient and easily adapt to house breaking. The short coat of this breed is easy to maintain. Occasional brushing would be enough to maintain the good condition of the coat and to distribute the natural oils that moisturize the skin. Frequent bathing is not recommended and must be done only when very necessary.

The Carolina Dog was discovered by Dr. Lehr Brisbin, Jr., the Senior Research Ecologist in the Savannah River Ecology Laboratory of the University of Georgia. The stray dog was found wandering near the Savannah River site is one of many dogs living in relative isolation in the southeastern wilderness of the United States. It was believed that these dogs have lived in these remote areas and had no opportunity to mate with local dogs. Most of these free ranging dogs were captured in the 1980s to be extensively studied. These dogs have a striking resemblance with the dingo and with the other pariah dogs. It was further noted that these dogs have rather unique behaviors. Strays would commonly live in populated areas. These dogs however preferred to settle in the isolated and sparsely settled stretches of swamps and woods near the Savannah River. The studies have noted that these dogs manifest behaviors of primitive dogs such as well defined hierarchy, cooperative organized hunting and communal rearing of the young. Female dogs have three successive estrus cycles so that during reproductive season there will be an abundance of puppies. Female dogs dug dens where they will give birth. They also regurgitate food to feed the puppies. These primitive dogs carefully cover their excrements with sand.

This dog type was given the name Carolina Dog by Dr. Brisbin. Carolina Dogs are also called Indians dogs as they closely resemble the dogs in the rock art and ancient paintings of the Native Americans. Mummified bodies and skeletal remains of this dog type were found along with other artifacts that date to the basket maker culture of the American Indians.

The exact origin of this breed is unknown although there are several theories that explain how this breed developed. It is highly probable that this dog type has developed from aboriginal dogs that were interbred with coyotes and wolves. Another theory points to the possibility that ancestors of the Carolina Dog are the dogs brought by Paleolithic hunters when they came across the Bering Strait land bridge more than 8,000 years ago. The primitive dogs were crossed with the wolves and the coyotes in North America and resulted to the Carolina Dog. Explorers have noted that Indians customarily capture wolf cubs to be domesticated. Another theory believes that the Carolina Dogs development can be a case of reverse domestication. It is possible that domesticated European dogs have returned to its original dog type. The dog has reverted back to its morphological phenotype and has manifested primitive canine behavior.

The Carolina dog is recognized and classified by UKC as pariah dogs. The Carolina Dog, the Basket maker Dog and the Kentucky Shell Heap Dog are other pariah dogs that are highly favored by Indians. These dogs are utilized as herding and as all around working dogs.