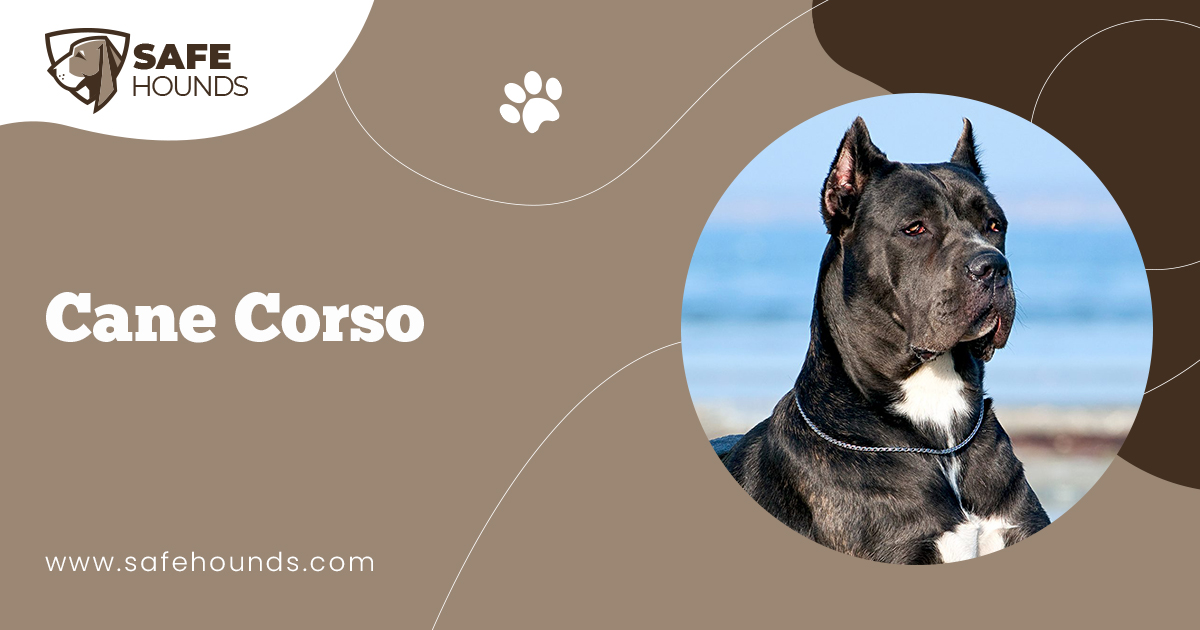 Cane de Macellaio, Italian Molosso, Italian Mastiff, and Italian Corso dog all these names refer to the large mastiff type of dog that originated from Italy. Cane Corso dogs that are mostly found in the southern part of Italy were mainly used for guarding and big game hunting.

After the decline of big game hunting, these dogs were developed as working dogs. Italian farmers found the dogs useful in moving stocks to other pasture lands and driving animals to market and slaughter houses. These dogs were also used as guard dogs that protected the livestock from animal predators as well as from thieves. Moreover, these dogs are known to develop loyalty and attachment to the owner and to his family thus, the dog that guards the stock now doubles as a watch dog for the home.

Sadly, when the agricultural regions in Italy were industrialized, the number of existing Cane Corso tremendously decreased. The breed almost becomes extinct. The breed was saved from near extinction by dog lovers in the mid 1970s. These people were able to find good specimens that were used in the selective breeding. Now the breed of Cane Corso can be found in different parts of the world delighting owners with their loyalty and excellent guarding abilities.

Cane Corso may have a robust and tough appearance but these are very sensitive creatures. It would not be uncommon to see this breed sulk and become sad and distressed if reprimanded by the owner. These dogs are known to mourn the loss of a loved one. A Cane Corso is dubbed as a velcro type of dog due to the fact that like a shadow the dog would always be beside the owner.

A Cane Corso dogs well developed, heavily muscled body denotes strength, power and agility. This appearance however do not disprove that the dog is elegant. A lot of people are drawn to a Cane Corso because of its looks. Others prefer the dog for to its guarding abilities. Cane Corso actually makes excellent family dog a loyal companion and a staunch guardian and protector. These dogs however, are not for everyone. Because they are a large breed they would need a lot of space. These dogs are known to snore, to support their massive heads against the masters lap, to drool, to shed, to chew furniture and to emit an unending supply of malodorous gas. Taking care of a Corso should not be a spur of the moment decision as it means taking full responsibility of the dogs well being for 8 to 10 years.

Italian Corso is an elegant mastiff type of dog of medium big built. The dog is considered to be a mesomorphic animal given that the body is longer than the height measured at the withers. Cane Corso dog measures 24 inches from the withers and weighs approximately 100 pound, bitches measures 22 inches tall and weighs about 80 pounds.

Color of coat may be blue, black, chestnut, fawn and red. Coat may also have darker streaks of any of the mentioned colors. The dogs hair is dense, shiny but stiff to the touch. It grows to approximately ¾ to 1 inch and grows thicker in winter. The dogs chest and feet may have white markings. The dog has a very prominent and marked stop. The broad and deep muzzle and firm lips that take the shape of an upside down U gives the muzzle a rather flat and square shape. The jaws are wide and strong, big white teeth have a level bite. Almond shaped eyes are medium sized, well spaced and eyelids are pigmented with black. Eye color would reflect the darkest shade of the coat.

Medium sized ears are triangular in shape and would hang close to the dogs cheeks. Ears however are often cropped. Uncropped, the ears would get semi-erect if the dog is alert and watchful. The muscular neck is slightly arched. There is an elastic skin on the lower part of the neck. Cane Corso have compact and muscular body. Dogs head must not be marred by wrinkles. The tail is thick at the base and do not taper at the tip. Tail is docked at the 4th vertebrae.

Cane Corso are known to be great family pets as they can easily get attached to the master. It would not be uncommon to see this dog follow the master and other members of the family around the house. These are affectionate dogs that would crave the attention of the human family. These dogs would lay their head on your lap and would prop their bodies against the members of the family they get attached to instead of lying on the floor or on a couch.

These dogs form an attachment with the family but they are more inclined to be loyal to the children. In spite of their size they are known to be careful and gentle with children seemingly knowing that these little individuals need to be handled with care.

The dog has a well developed protective instinct that enables him to distinguish a friend from a foe. This dogs excellent guarding and watching ability however, does not mean that the dog is aggressive. Yes, the dog may be reserved and wary of strangers. If the circumstance dictates, the dog will be a fierce protector of the home, the property and most especially of the family. The dogs protective instinct does not mean that it can not be taken by the owner in public places. These dogs will react only if a real threat to the family is evident. A Cane Corso was originally developed as a working dog. Although they are excellent wild game hunter they are not fighting dogs. These dogs will not start a fight but neither will they run from a fight.

Cane Corso are extremely territorial dogs. It is their nature to dominate other dogs. This is why early socialization with other animals is necessary. The dog would tolerate other dogs and smaller pets if he is raised with them. It would be better if socialization is started at an early age. An 8 week old puppy will respond more to obedience lessons. The Corso will learn how to act with children and with other dogs. Moreover, with the socialization, problems like house breaking, dominance and destructive behavior will be dealt with.

A Cane Corso would do well in a house with a yard. The dog can also live in an apartment or condo as long as it is provided with adequate exercise. Because these dogs want to be always with the family, to be included in the activities, they will be content to live indoors. However, these are athletic dogs, with boundless energies and they need to be exercised a lot. These dogs would be excellent jogging and biking companions. These dogs would also enjoy swimming and playing fetch with the kids. Used to the outdoors, a Cane Corso can live outside the house as long as adequate shelter is provided. The owner however needs to devote some time for the dog as although these breed are non-barkers, they would suffer from separation anxiety and would manifest their boredom and isolation with barking and with destructive behavior.

Cane Corso is a light shedder and does not need much grooming. Brush the coat occasionally to remove dead and loose hairs.

Canes Pugnax is believed to be the direct ancestor of this ancient Italian mollosser. Cohor is the Latin word that means guardian or protector.

It was believed that Cane Corso has descended from the famous ancient dogs that were treasured by the Greeks and the Romans – the Molussus. Having stemmed directly from the Roman Molussos, these dogs are the modern counterpart of the Roman war dogs that were made to fight lions and wild beasts inside a Roman arena. Cane Corso, similar to their war dog ancestors possess excellent agility, courage and stamina. These dogs are in great demand as big game hunters. Their powerful strength and excellent tracking abilities made them a valuable asset for hunters of wild boar, bear and other big game.

In recent years, agriculture was modernized, the development and use of firearms and other means of hunting were developed and introduced. This greatly reduced the need for hunting and working dogs. Along with the disappearance of wild game, the number of existing Cane Corso also drastically declined. This situation was further aggravated by the havoc wrought by Second World War to the properties not to mention to the breed of the Cane Corso.

In the early 1970s, Cane Corso almost became extinct despite the efforts made by staunch supporters of the breed like Count Bonatti and Professor Ballota. It was only in 1976 when Dr. Breber, a keen dog lover and researcher reintroduced the Cane Corso to dog lovers through an article published in the ENCI, an Italian kennel magazine. This was the start of the recovery of the breed.