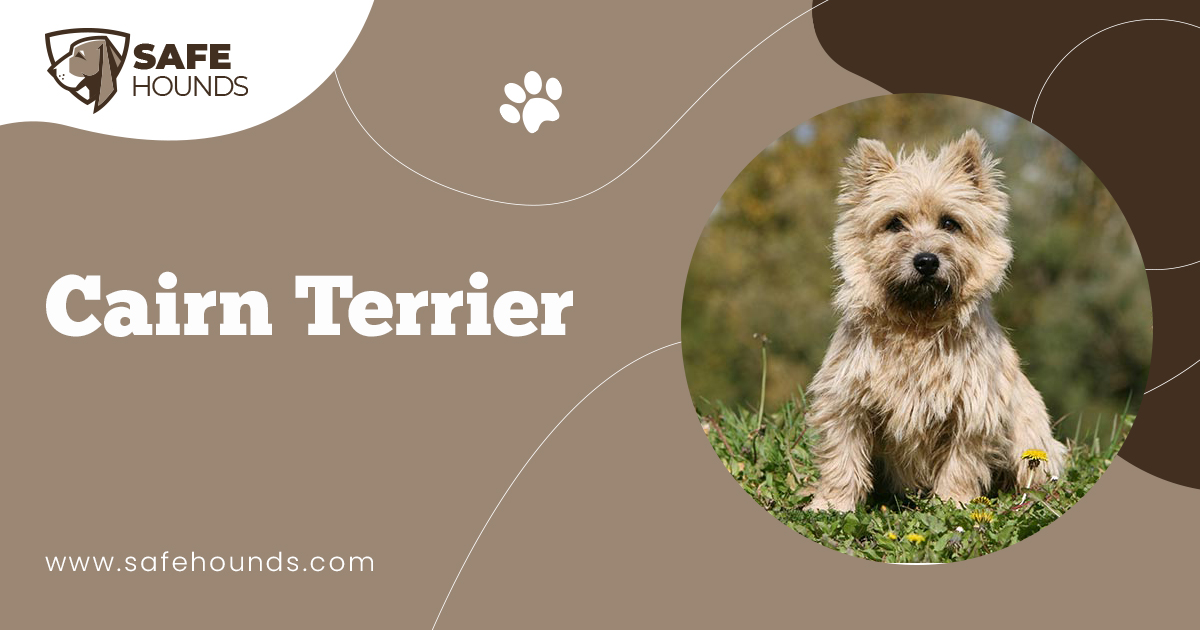 This cute little terrier is shaggy looking and has a face like a fox. They are very energetic and playful. Their coat is red, brindle, blackish, sand, and various grays. They have a small little body and are about 14 inches from head to tail. They have deep eyes and they are usually hazel in color.

If you wish to purchase a Cairn Terrier to enter into dog shows, you must look for faults, so you know if they can be shown or not. Some of the faults would include missing teeth, a pink nose and they cannot have any white spots anywhere on their body.

They are very easy to train to do tricks and they love to play with kids. You will notice that the female is much more independent than the males are. They will have a streak where they will do what they want, when they want. You will have to curb that right away, if you do not want them walking all over you.

Even for their tiny size, the Cairn terrier is very muscular and their little short legs are very strong. That does not mean you can rough house with them like a bigger dog though. They are still a fragile toy breed. You will want to watch when around kids because they will want to keep playing and playing and you will have to stop him so he doesnt get worn out, not the kids!

The Cairn terrier is a smaller dog. It is only a little over 14 long and it is very short, but has a very strong bone structure. The terrier has short pointy ears that are erect. The tail on the dog is short and furry that sways along as they walk. The eyes on the terrier are deep hazel color and have a deep set to them. The Cairn terrier has a fox like expression for a face.

A well-groomed Cairn terrier should have the rough and ready look. The shortness of the Cairn terrier gives them the ability to run, but not long distances. Their short legs are stable for them to walk without any problems. They give off a short appearance, but they have the energy of any other kind of dog.

The Cairn terrier is a beautiful and loving dog. The appearance of the breed gives off an adorable loving look that fits any family or any master.

The personality of a Cairn terrier is loveable, loyal, alert, and merry. This dog lives like a big dog in a little dogs body. The Cairn terrier is very good with children and loves to be playful with kids. Without getting the attention it needs a Cairn terrier can become destructive and may bark a lot.

The Cairn terrier is a breed of dog that loves to learn new tricks and is very easy to train. When you are outside with your Cairn terrier, always make sure not to leave your dog unattended in a landscaped yard because of the fact that they like to dig in the dirt. They like to look for vermin in the ground. In addition, when outside do not leave your dog unattended when they are tied up because they may fight with other larger dogs to protect their area.

Exercise is good for this breed. If living in an apartment, they must go out and get some exercise. Otherwise having a good yard for them to go out and play in will be great exercise for the dog.

The Cairn terrier does not shed at all. With the shaggy fur coat, the dog must be brushed several times a week or otherwise the fur coat can become a matted mess. Be gentle when brushing because of the soft coat underneath. Bathe your Cairn Terrier once a month to keep the fur clean and after bathing brush the dog while the fur dries. This will keep it from matting while his hair dries.

Keep the hair trimmed around the eyes and ears with a blunt nosed scissors. Also, make sure to keep the nails trimmed about once a month. This will keep the nails from curling into their pads.

This adorable little breed was found by Captain Martin MacLeod of Drynock, Isle of Skye. It was said that the cairn breed came from many other terriers including the Skye and the Drynock strain along with several other kennels of terriers that were prominent.

Therefore, the Cairn terrier was bred and soon after Mrs. Alistar Campbell and Mary Hawke were very unrelenting in getting them recognized by the Kennel Club in 1910, however, it was not until 1912 that they gave them their own place in the kennel club.

Mrs. Price was the one to introduce the first Cairn terrier to the United States in 1913 and she owned the first registered cairn that was registered with The American Kennel Club.

Now, their popularity in England has been one of the fast growing breeds since. Everyone seems to want one and they have a high price on their heads as well, because of the very prominent cairns in their ancestry. You can expect to pay close to $1500 for some, higher if they have a championship bloodline. When you are going to pick one out make sure you ask about the bloodlines.

Cairns love the water and they will swim for hours if you would let them, but of course, they should not get overly tired. Bring them in, let them rest, and then let them go back out to play. It was once said that a cairn had jumped into the water after an otter and the owner said he was under so long he was really getting worried. Therefore, he jumped in to get him and when he found him, he still had a bite on the otter. They are a relentless dog.

Cairns are so loveable with easy temperaments that they have been used as care dogs in Therapy programs for the elderly in many nursing homes. The older persons face just lights up when one of these little guys, come to visit. The staff says the patients do a lot better after the visits.