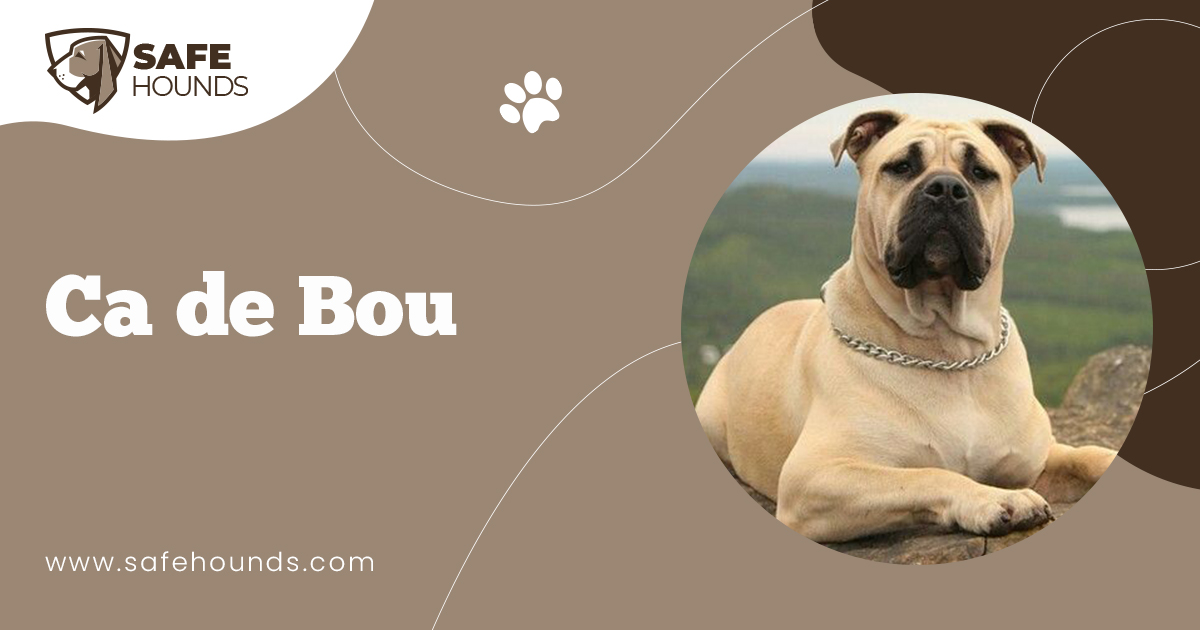 The Ca de Bou is an ancient molossian type of dog whose existence dates back to the 11th century. For centuries, this breed of courageous dogs that has existed in Spain and in Mallorca has remained pure because of the isolation of the islands. Bull fighting is one of the most if not the most popular sport in Spain. The Ca de Bou has earned the title the fighting dogs of the islands because these very brave and extremely agile dogs are usually seen in bull rings being used to distract the bull to rescue a toreador. During the British reign, bull baiting was introduced by the English to the islands. These dogs have proven their prowess in baiting bulls. The Cao de Bou has also excelled in dog fighting, a sport that was popular during that time.

Bull baiting was banned in Spain in 1883. In 1940, dog fighting was also banned. However, Ca de Bou enthusiasts have utilized this outstanding breed for other purposes. Because of the combative personality as well as the intimidating appearance, the dog has become dependable guard dogs. The dog may show an aggressive personality towards strangers but surprisingly, it is extremely loyal and devoted to its human family. The dog forms a strong attachment to its master. Unlike other breeds that would pick out a single person to bestow their affection, this breed loves the entire family. These dogs were also used as farm dogs and kept by butchers. While butchers are preparing to kill the bull, the dog would hold the bull at bay.

Perro Dogo Mallorquin as the breed is also known is recognized by FCI. Breed population however is very low. This outstanding beautiful breed belongs to the rare breeds of dogs. However, the future looks good for this breed as it is slowly gaining popularity.

The Perro Dogo Mallorquin is typical Molossian breed with its strong and powerful elongated body. This breed has a distinctly large head whose circumference is bigger than the chest measurement measured at the withers. The head differentiates the male from the female. Male heads are distinctly bigger in size. A Ca de Bous head is almost square in appearance due to the shape of the skull and because of the large, broad and flat forehead. This breed has a protruding strongly defined stop.

The broad based conical muzzle gives the appearance of a blunt cone. The broad black nose has a well defined philtrum. The dog has a straight nasal bridge and taut upper lip that covers a lower lip that is folded in the middle part. Large wide opened eyes are oval in shape and set slightly slanting. Deep set eyes take the color of the coat. The already small ears that are set on high are usually cropped short and rounded to give the dog a panther -like appearance. The Perro Dogo Mallorquin is a medium sized dog with a sturdy and compact body that is very similar to the body of a mastiff. This breed that reaches up to about 22 inches in height can weigh as much as 150 pounds. The strong neck that has a slightly loose skin may have a dewlap. The tail is low set. It is thick at the base and tapers towards the tip. At rest, the tail hangs naturally. On the move, the tail forms a slight curve and raised to the level of the topline. This breed has a rather thick skin that closely fits the entire body except the neck. The hair is short and rough to the touch. The sleek coat usually comes in different shades of tan and yellow. A Ca de Bou may be brindled and may have a black mask.

The Perro de Presa Mallorquin is best described as a bulldog with a happy and playful temperament. This breed is quiet by nature. It makes a good guard dog as it would show its ferocious temperament to people considered as its enemies. However, the dog is loyal to its family. A Ca de Bou adores children and known to do well with other dogs. This breed is not recommended for a novice dog owner. An owner has to be firm and able to show the dog that it is the leader of the pack. This dog may be devoted to the family but the bull baiting characteristics will surface from time to time. Firm handling is very necessary. These dogs would do well in an apartment. They are fairly active indoors and would not really need a yard as long as they are taken on daily long walks to exercise.

A Perro de Pressa Mallorquin is an easy dog to care for. This breed does not have extensive grooming requirements. The short coat would benefit from weekly brushing. Ears and eyes must be regularly cleaned. This breed sheds twice a year and during shedding season, brushing must be done more frequently to remove loose dead hair.

The Ca de Bou also known as the Perro de Presa Mallorquin is a Molossian type of dog that has an elongated strong and powerful body. This rare breed of medium sized dog noted for having a combative personality originated from the Spanish island of Mallorca, one of the bigger islands that comprise the Balearic archipelago. The history of this breed extends back to the 11th century. Like any other ancient breeds, the origin of the Ca de Bou is cloudy and has been the subject of controversies. One theory believes that modern day Ca de Bou was recreated from an extinct Spanish breed of dog. It was also speculated that the breed was developed from the remaining specimens of the Mallorquin bulldogs.

Historically, the Perro de Presa Mallorquin resulted from the crossbreeding of different breeds like the Alano Español, the Fila de San Miguel with the local fighting dogs that were brought to the Balearics by traders and invaders. During the ancient times, seafaring traders from the east and the west that traded in the Mediterranean regions resulted to the exchange of culture between trading nations. The reciprocal relationship also resulted to the exchange of domestic animals. Traders and settlers have brought with them large strong dogs with powerful teeth and large heads. These dogs with intimidating appearance were utilized to guard and protect the harbors and the settlements against marauding pirates and robbers. One of these large dogs stood out among the rest  the mastiff of Iberian Peninsula. This hunting and fighting dogs were brought by the Spaniards when King James 1 of Aragon expelled the Moors from the Balearic Islands in 1232. Some present day breeders believed that the Pyrenean mastiffs, Spanish mastiffs and the old Spanish Alano they are breeding descended from the mastiffs brought by King James 1 to the islands.

Following the Treaty of Utrecht in 1713, the Balearics came into British possession. It is probably during this time that the name Ca de Bou evolved. Ca de Bou is a native Catalan word that means bull-dog. The English introduced bull baiting during their reign. The English brought with them guard and fighting dogs. However, because the English knew that their dogs would not adapt well to the heat, these dogs were crossed with the native mastiffs of the Iberian Peninsula. When the English left the island of Mallorca in 1803, they left behind the sport of bull baiting. In England the sport of bull baiting was banned in 1835 but it was not until 1883 that the sport was banned in Spain. The Mallorcans were impressed with the breed of dog created by the English and further develop the breed to be guarding and hunting dogs.

Although the famine of 1920s to 1930s has greatly affected the breed, enthusiasts have managed to register the Cao de Bou in the Spanish stud book in 1923. In 1928, the first official entry was made. In 1929, the dog was shown at a Barcelona dog show. Very few pure specimens were left by 1964 but the breed standard that was created in 1946 was finally recognized by FCI in 1964. In the 80s, crossing the remaining specimens with the Ca de Bestiar revived the breed. In spite of being an ancient breed, the Perro dogo Mallorquin is considered to be a rare breed. Presently, there are only about 400 dogs in existence all over the world.