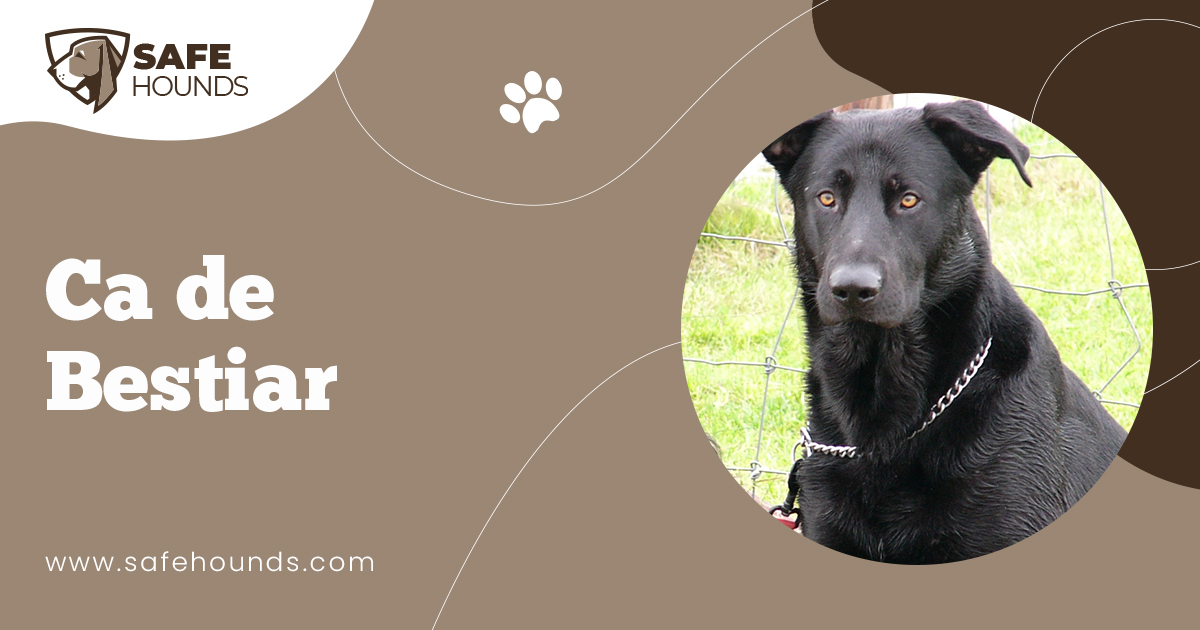 The Ca de Bestiar is the smaller version of the Cao de Castro Laboreiro of Portugal as both have almost the same body build and coat color. This dog that is also called Majorca Shepherd Dog and Perro de Pastor Mallorquin is an unknown breed in United States. If the dog is seen it is oftentimes mistaken as a Black Lab. Other people who noticed the dog would assume that it is a Lab mix. This dog though is a pure breed that hails from Mallorca, in fact this breed is considered to be the pride and the symbol of Mallorca. The dog personifies the characteristics of the people in Mallorca. These dogs like the people in Mallora are friendly but cautious of strangers. People and dog are not violent but if it is necessary to protect the family or the property both will not hesitate to show aggression.

The Perro the Pastor Mallorquin was primarily developed to be herding dogs. The pastor in the name means shepherd. This dog is an outstanding herder and highly territorial guard dog that can be depended upon to guard the family and its possessions. This breed is very rare, seldom seen in other countries. The Ca de Bestiar though is popular in Spain as it would be very common to see these dogs in farms and villages. A Ca de Bestiars litter range from 1 to 6 puppies. It is a usual practice for a farmer to choose a puppy from the litter and barter the rest to a neighbor or to another farmer. The pedigree of the dog is not given much importance.

Stories about this breed abounds. During the 16th and 17th centuries these brave dogs were used to guard the homes against thieves and marauders. However, the black color of the dog is favored by bandits who use the dogs to attack travelers on the road at night. There were many other anecdotes showing the dogs bravery that has saved many lives.

The Ca de Bestiar is well proportioned dog that weigh approximately 77 to 88 pounds and has a height that ranges from 26 to 29½ inches for males and 24½ to 27½ for females. This dog that was primarily developed to herd cattle has strong and straight forelegs and very muscular hind legs that make the dog excellently carry out its herding functions. This dog has to control the flock, no sheep should be allowed to stray or to be left behind. The dogs agility is most useful when it needs to bring runaway sheep back to the flock.

The dog has a well defined head with a medium sized muzzle and a black nose. Small round eyes are widely set apart. Triangular ears are set on high and hangs down to the sides of the head. A Ca de Bestiar has a level topline, broad and deep chest with well sprung ribs and a tail that is undocked. At rest the tail hangs down and rose at the back in the form of a saber when the dog is on the move. There are actually two types of coats. A Ca de Bestiar can be long haired or short haired but both coats are black in color.

The Majorca Shepherd Dog is the breed that is affectionate to the whole family but would form a strong attachment with one person alone. These dogs are very loyal. A mature dog given to a new owner would still show loyalty to the former owner. New master may have a hard time to train the dog to unlearn its former loyalties.

This breed is extremely territorial. They have the inherent desire to protect the family and the property which the dog considers to be a part of its territory. This is why training and socialization is very necessary. Training have to be started while the dog is still a puppy as mature dogs can be hard to train when they show their independence and dominance. The owner must be firm with the training. Moreover, training must be consistently done but in a kind and positive manner. These dogs have the inherent ability to herd. Usually, a sire and dam that have excellent herding abilities will pass the traits to the brood. Nevertheless, training will still be necessary to teach the dog how to interpret the shepherds commands.

Some dog experts believe that this breed would not make suitable pets and that a child should not be allowed to be near the dog. This is due to the fact that early Ca de Bestiar was used in dog fighting. Although this is no longer practiced nowadays, present day dogs still have the inherent fierceness and the propensity to bite. This notion however was refuted by owners who has raised the breed for years and found the dog gentle with kids. A Ca de Bestiar tolerates dogs and other pets.

These dogs would require enough space where they can run. These are working dogs and they most certainly need vigorous exercise. Being active indoors they can live in apartment as long as they are taken on long walks everyday.

The Perro de Pastor Mallarquin is a very ancient breed of dog and like any other ancient breeds, the origin is somewhat cloudy. This dog originates from the Balearic Islands of Spain. Varied theories exist regarding the origin of this breed. One theory states that these dogs originated from the dogs brought by traders as they pass Balearic Islands on their way to the Mediterranean. This breed may have been crossed with other types or a mutation occurred giving the dog the ability to withstand the islands extremely hot climate the dog is subjected to everyday while herding the flock

The Ca de Bestiar was developed because of the lumberers need for a strong dog that will fight the dogs of poachers. The Ca de Bestiars ancestor was mated with the Ca de bou for fierceness. This has made the dog excel in dog fighting. The alan dog was also mated with the Ca Me to create an affectionate and mild tempered dog. The pure alan dog was also crossed with the hound from Ibeza to create a breed that will be fast and agile and can easily adapt to the Mallorcan Mountains. The arrival of the German Shepherd, Doberman, Great Dane to the island further contributed to the destruction of the Ca de Bestiar as a pure breed.

About twenty years ago, dog enthusiasts have began a movement that would recover the pure Ca de Bestiar. Mixed breed are dubbed as feien carn which literally translates as making meat. These mixed breed dogs are known to indiscriminately kill animals. Sheep, ducks, chickens are not spared. Alonso Guasp spearheaded the movement started in 1970 to save the pureblooded Ca de Bestiar which is already on the brink of extinction. The Club del Perro Pastor Mallorquin was established and the Breed was officially recognized by the FCI in 1980.