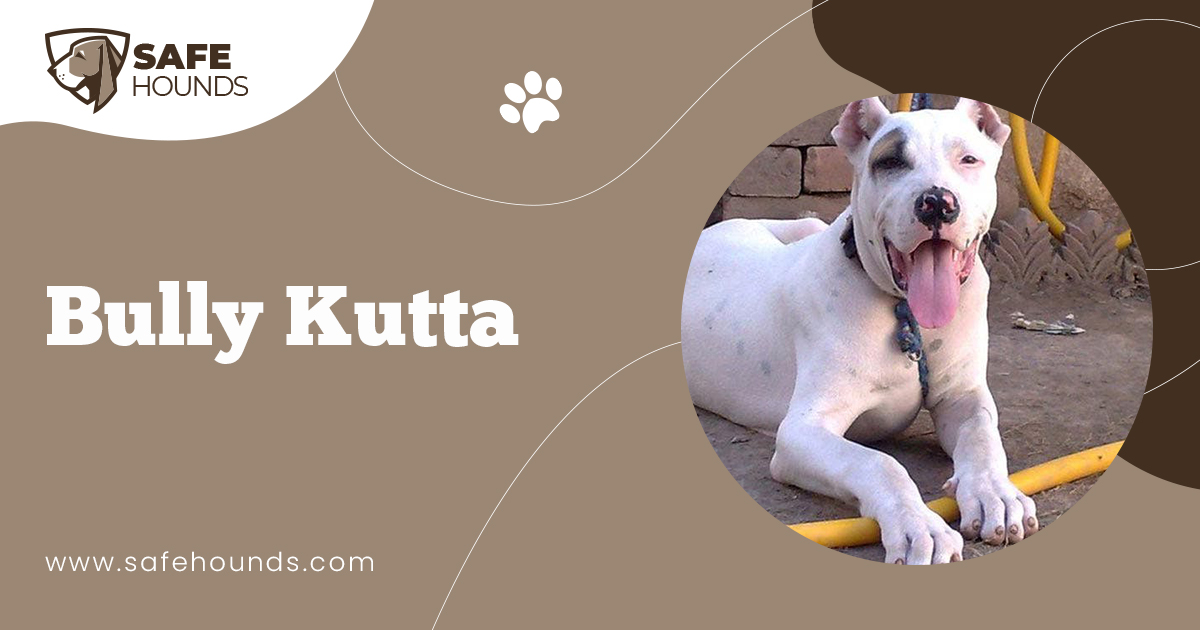 The Bully Kutta is powerful mastiff with a muscular and strong boned body. Long legged, wide chested and with well developed jaws, the massive Bully Kutta will exude a ferocious and intimidating appearance. Ancestors of this breed were used as fighting gladiator war dogs. The Bully Kutta was dubbed as the Beast from the East as the breed has gained the reputation for being extremely aggressive. These dogs can be very difficult to handle they are even known to attack their owners. Bully Kuttas are mainly used as guard and protection dogs. Although dog fighting was banned in Pakistan years ago, illegal dog fighting tournaments are still being held. Because of the immense size, brute strength and the ferocious temperament, Bully Kuttas are one of the most sought after breeds for dog fighting.

A Bully Kutta has a gait that is not unlike a lions gait. The dog has a graceful gently swaying stride. This way of walking is unique to this breed as no other breed of western mastiff moves this way. This dog may have a fluid and somewhat laid back movement but it is apparent that this is a dexterous and nimble footed powerful dog. The Bully Kutta excels in dog fighting as when it is in the pit, the dog would shed off its indolent manner and be the agile, alert and aggressive dog that that he is. The Bully Kutta is a thick boned muscular breed. Weight of male Bully Kuttas range from 150 to 170 pounds though some large specimens can reach up to 210 pounds. Female Bully Kuttas are rather smaller. Measured at the withers, a males height can vary from 30 to 44 inches and females height is from 28 to 36 inches. Because of its mastiff ancestry, a Bulla Kutta has the looks of a mastiff. The breed is noted for its colossal head that is supported by the thick well muscled neck. True to being a mastiff, the dog has a wrinkled boxy face as the face, the mouth and the neck are loosely covered with skin. The dog has a strong black muzzle. It has well developed very strong jaws. Its vice-like grip is one of the qualities why the Bully Kutta is a most sought after breed by dog fighting enthusiasts. Pricked ears are set high on the skull. Deep set eyes seem to be hollow when seen from a distance. The Bully Kutta is a wide chested breed. The back is long and the brisket deep. The loose stretchable skin perfectly covers the well developed bone structure. The smooth short coat is predominantly white in color although dogs can have black, brown, fawn coats. Brindle, bi-colored and dogs with variedly colored markings are also seen.

The Bully Kutta is used by criminal gangs in the cruel and illegal sport of dog fighting. The dog truly has a ferocious temperament. These dogs after all have descended from ancient notable war dogs. The dog has a reputation for being extremely aggressive. Some dog owners have attested to the fact this breed would be virtually untrainable and very hard to tame. However, in the right hands, a Bully Kutta can be trained into well mannered pets. This breed though is not for a novice dog owner. The owner must be the strong leader of the dog. A well socialized and appropriately trained Bully Kutta will be a valuable addition to the family. Bully Kutta puppies are boisterous and would make a wonderful playmate of the children. However, children must not be left unsupervised with a Bully Kutta even if the dog is well socialized and properly trained. A massive sized dog can inadvertently hurt a small child. This breed has strong guarding instinct. They are very protective of their family. A Bully Kutta will lay its life on the line to protect its family. Because of it dog fighting history, a Bully Kutta is expected to be dog aggressive. These are massive dogs but they do not have high exercise requirements. This dog has a rather laid back temperament. The dog would enjoy sleeping all day rather than running just like other breeds of dogs do.

The Bully Kutta is a short coated breed. This means that the dog would not require extensive coat maintenance. Occasional coat brushing would be sufficient to maintain the good condition of the coat.

The Beast from the East this title was given to the Bully Kutta, a breed of aggressive dog that was used in the cruel and bloody sport of dog fighting. This powerful mastiff type breed is also referred to as Indian Mastiff and Pakistani Bulldog. The Indian Mastiff name was given due to the fact that that this rare breed of dog hails from southern India specifically from the Thanjavur and Tiruchi districts. The Pakistani Bulldog or the Pakistani Mastiff name was given as although the breed was developed in India these dogs are commonly seen and used in areas that belong to Pakistan.

This breed is believed to have English Bull Terrier blood. This rare dog breed is believed to have resulted from crossing Pointers and English Mastiffs with several breeds of British hunting dogs. This breed was supposedly developed while India was under the British Colonial rule. This theory was disputed by historians as they believed that the Bully Kutta has a very ancient origin. The Persian Army has been using the local mastiffs that were introduced in 486-465 BC by Xerxes the First when he marched into Greece. There are evidences that point to the fact that mastiff type dogs were already in existence in Pakistan and India long before the British legion arrived. These dogs have directly descended from the white Alaunt of Persia, from the ancient Persian Hyrcania dog and from the Assyrian Molossus, the legendary dogs that were brought by the Indo-Aryan invaders to the Indian subcontinent. This theory was supported by the writings of Alexander the Great and his boyhood tutor Aristotle. Due to the interaction between Persia and the Assyrian empire, it is highly possible that the Indian and Persian mastiff dogs have influenced each other.