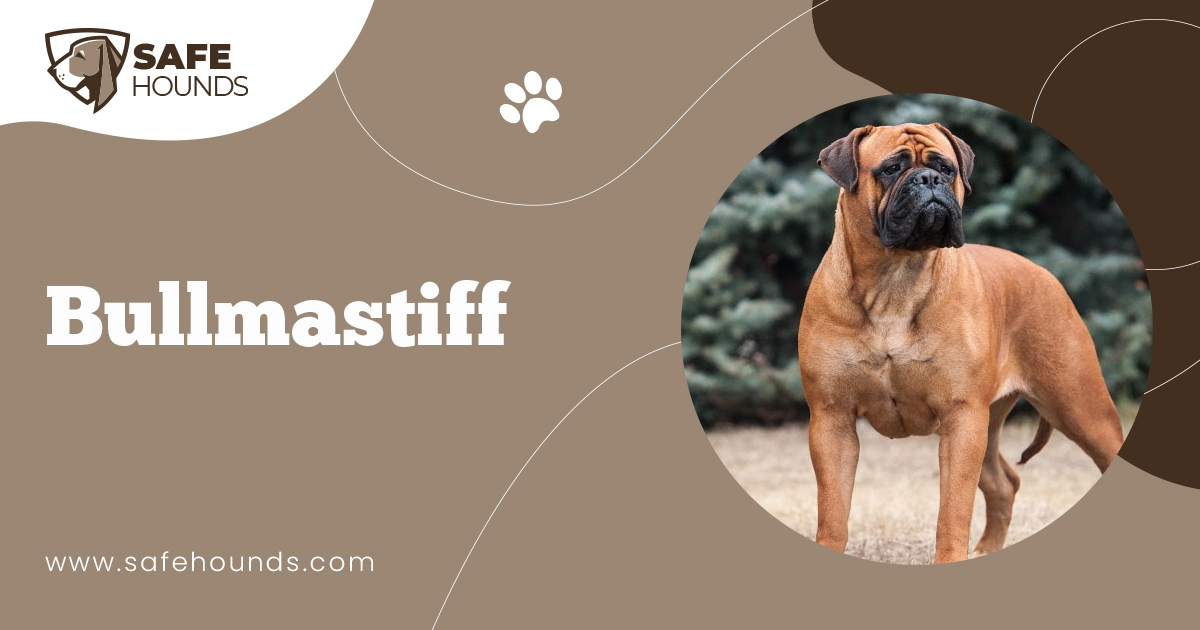 The Bullmastiff is a powerful dog and very alert. These dogs were bred to go with gamekeepers for tracking and being able to subdue a poacher. They are not shy and will not back down from a fight if one ever occurred. They seem to back away when strangers approach them but with their family, they are very loving. When you first see a bullmastiff they do look intimidating, but they are actually pussycats.

When it comes to protecting their family, they will chase down an intruder and hold him there. The temperament of the Bullmastiff throughout history was one that is not tolerated in todays society, since they would charge after danger. That is why they make great guard dogs but todays dog isnt as active as you would expect of a guard dog, but when it comes right down to it, they get the job done. They know who belongs on their property and who does not. Being the large and powerful dog that he is, loyalty is a trait in their character and whatever it cost to them, even their life, they will protect their family.

People that get a Bullmastiff should be prepared to have him trained properly because if they are not they will take over. You want to make sure he knows you are the boss and stick with the training even though he is stubborn and acts as if he is not learning anything. He will learn but just put up a front and surprise you one time by doing it the first time he is told.

Ranging between 24-27 inches high and usually weighs around 110-130 pounds for males and females are about 24-26 in height and 100-120 pounds. The Bullmastiff is a large powerful dog. He is 60% Mastiff and 40% Bulldog and 1924 was the first time they were recognized. As big, as they are they are not clumsy and are very active.

Their facial expressions show how intelligent they are. Their eyes are about medium size and dark colored. They have a large skull and a flat forehead with a deep and broad muzzle. They have large nostrils and are black in color. They have a slight undershot and large teeth set wide apart with no protrusion to them at all.

Their neck is very muscular and thick and almost the same size around as their head. They have a wide deep chest and the rib cage is well sprung. They have a short back giving them the well-balanced look. The tail may be straight or have a curve to it but never carried as a hound carries his.

They have slight sloped muscular shoulders, their legs are straight, and the elbows are never turned one way or another. Thick pads and black nails are the only way they should look on a Bullmastiffs feet. If your going to show your dog then make sure, they do not have cowhocks or splayed feet because this is a grim liability for the judging. The coat on a Bullmastiff is red, fawn, or bridle. Any white markings are a flaw in the judging or for breeders as well.

The Bullmastiff is a dog to be reckoned with. You must remember he was bred to be a guard dog. This dog can be very gentle and act like a clown or he can stand his ground and hold down a stranger who is endangering his family. Every dog has a mind and personality of its own and the Bullmastiff is not any different. You may get one that is totally aggressive or you may get one that is passive.

He will not run the ground down in your yard either. He will usually find one spot which enables him to watch all his territory and act like he is just chillin but you can be sure any movement unknown to his usual surroundings he will be right on it. You will want to watch them around children. They are very large and when they run, they do not pay attention to whats in their way.

You do not want him to get too much exercise because while his bones are forming it could cause damage to his legs. Make sure, if you have more than one dog that they have time to themselves. You will not realize how much a Bullmastiff drools until you have one. Especially after they get a drink of water, you will be getting daily bathes in saliva and water.

They shed more then you would think a short haired dog would. All you have to do is pet him and you pull back a hair-covered hand. Do not feed him one big meal break it down into three smaller ones because they tend to gain weight fast. Keep an eye on their feet. If not properly cared for, the pads on their large feet can crack easily.

Breeding the Mastiff and the Bulldog started in the 1800s and it was the only guard dog in England for the large estates. On their land, they had many animals and they had a lot of trouble with poachers so they used a Bulldog. They did not work out because they would tear the poacher up too much. The Mastiffs were tried but they were just to slow and could not hold the poacher and the poachers would get away. Therefore, the breed of the Bullmastiff was developed which consists of 60% Mastiff and 40% bulldog.

Given the name of Bullmastiff, they did exactly what the gamekeepers needed. They very quietly snuck up on the poacher, crept up very close, jumped the poacher, and with his big size he held them until the gamekeeper got there. There was a highly trained Bullmastiff named Thorneywood Terror that made his owner a lot of money. He would take him into town and muzzle him, then tell any volunteer he would give him a 10-minute head start into the forest and his dog would find him. A lot of people, not knowing the history of the Bullmastiff, laughed and took his bet. Thorneywood Terror never let his master down. He ran, tracked, caught, and held him down every time!

When the large estates dwindled away, the need for the Bullmastiff did as well. Now they are just bred for companions. He is a very protective breed that is known for following you to the door to answer a knock. Now, your expression at the door will give your dog the clue whether the visitor is a friend or foe. If you greet your visitor in a calm and inviting voice, so will your Bullmastiff. However, if someone tries to force their way in, they will receive a huge surprise! He will stand his ground and not allow them in. Not many people are dumb enough to keep coming. They usually do not bite but if the circumstances warrant they will.