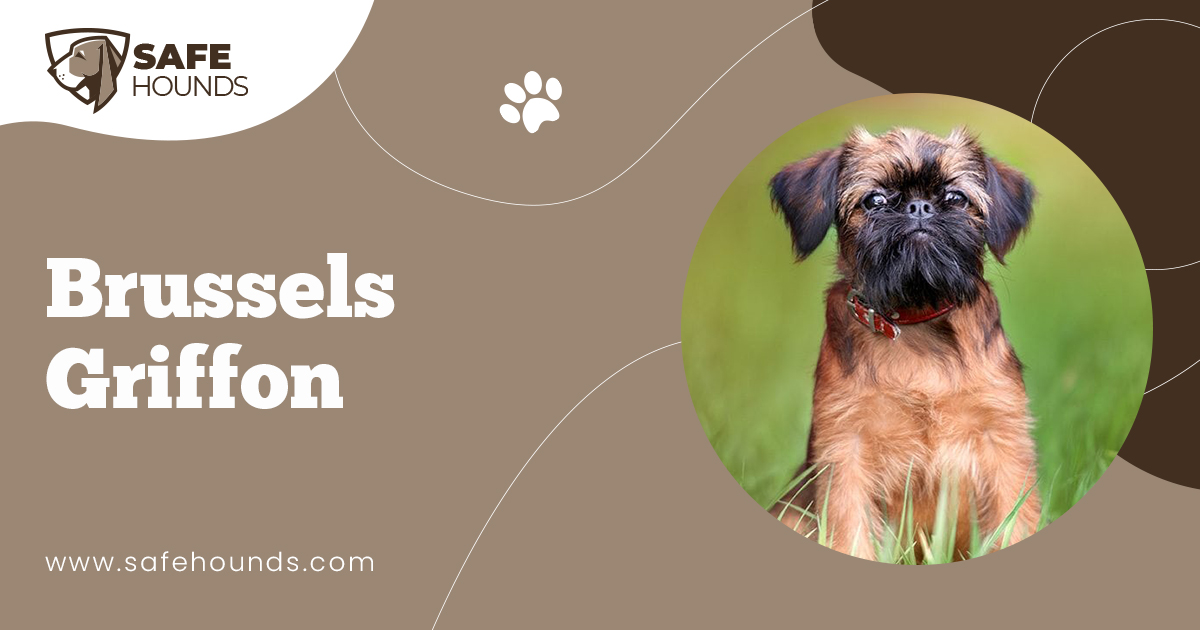 The Brussels Griffon originated in Brussels and was a product of breeding different Toy breeds of Affenpinscher, the Pug, and the English Toy Spaniel. The Griffon has a flat looking face and pushed out chin like the Pug and the huge eyes that should not look like they are ready to pop out of their head.

They have a muscular body that is strong and sturdy. The Brussels Griffon should look sturdy and not delicate. They are heavier than what they look for their small size. They were bred to be a great family pet and they love their family. They are usually about 7 pounds and rarely go over 12 pounds. Their coats are either wiry or smooth.

They have a look on their face that many say makes them look almost human. Some people say they even remind them of the Wookiee from the movie Star Wars. When you see them walk, it is more like a trot. Their head is held high and think they are just it! They know who they are and they want you to know it as well.

They have ears that are high set and it is usually up to the owner on whether to crop them or not. Their jaws stick out so their lower incisors protrude over the upper jaw and that gives them the appearance of smiling.

The colors of Brussels Griffons are black, red, or black and tan. You should look for a strong sturdy body that is well proportioned. The head should be the most important feature, which should be round and large. The nose is black, very short and is set deeply back in between the eyes to make it look laid back. The nostrils should be very large and open. You want to look for the slightly arched back. The legs should be muscular and set apart but not bow legged.

Their feet should be small, compact, and round but set straight forward and not turned one way or the other. Coloring of the toenails and pads are preferred to be black. The coat should be more wiry and dense. It should not feel like wool or have any hair at all that is silky. The coat should be short and not too long, as with show dogs they do not want them to appear like a shaggy dog.

The mouth when closed should not show any teeth or tongue. The lips should be black, tight with the top lip under the nose, and should not overlap the bottom lip at all. The eyes should be large but not bulging.

They should have a short body with their tail high. You keep their hair around their face fringed. They shed only in the summer and the rest of the year shedding is very minimal so they make a great lap dog. With the Brussels Griffon breed, you will not need a hair comb for your couch or chairs.

You will have to watch this breed, as they can be manipulative and spoiled easily. If you do not train the Brussels Griffon, he can become vicious and develop bad habits you will not be able to live with. The Griffon wants all the attention and you cannot give it to anyone else. This breed is very stubborn and wants to do what he wants. They make a very good watchdog and will get real excited when someone or some other dogs comes on his property. Watch this because if they get to suspicious of people it may lead to biting. These dogs are not the easiest to housetrain so it will take some patience on your part.

This breed is especially easy to care for. Shedding is almost non-existent except in the summer and they do not need very much exercise at all. They just need to have a few toys around to keep them busy. You do not have to have a big yard for exercising this breed of dog. The Griffon makes a great apartment dog because of their small size. The Brussels Griffons are very fragile dogs. You have to watch him constantly because just jumping out of your arms or off a sofa could mean a broken leg or possibly his neck. They need close supervision on the owners part. They are not for families with children. Children are too clumsy and can injury them very easily when they just think they are playing.

The breed many say was developed in coach houses in the 1800s. The Griffons dEcurie, which is believed to be the ancestors to the Brussels Griffon, was often kept in the stables to run off rats and other vermin. Belgium coachmen breed their Affenpinshcer like Griffons dEcurie with Pugs and the King Charles Spaniel, which shows in the coat. Mixing the breed also gave them the newer colors of the rich reds and the black and tan. The popularity of the Brussels Griffon grew throughout the 1800s and by the later 1800s everyone loved these little dogs.

Queen Marie Henriette had a passion for dog shows, which she would visit when she was in Belgium. Many times, she would bring along her daughter. She became a breeder and booster of Griffon Bruxellois, which gave them international fame, and the start of two Griffon Bruxellois clubs in England and America.

After the First and Second World War, it was a sad time for the Griffons. There were many breeding faults among the breeders, which ended up with many having webbed feet. When the end of the second war came around the breed was almost non-existent and only through a dedicated breeder in England did the breed survive through all of this.

Because they are so hard to find in the United States, even though they are becoming more popular, they are a pricey dog. You can expect to pay close to $1000 if not more for them. If you purchase one you will want more, this is a very additive breed once you own one.