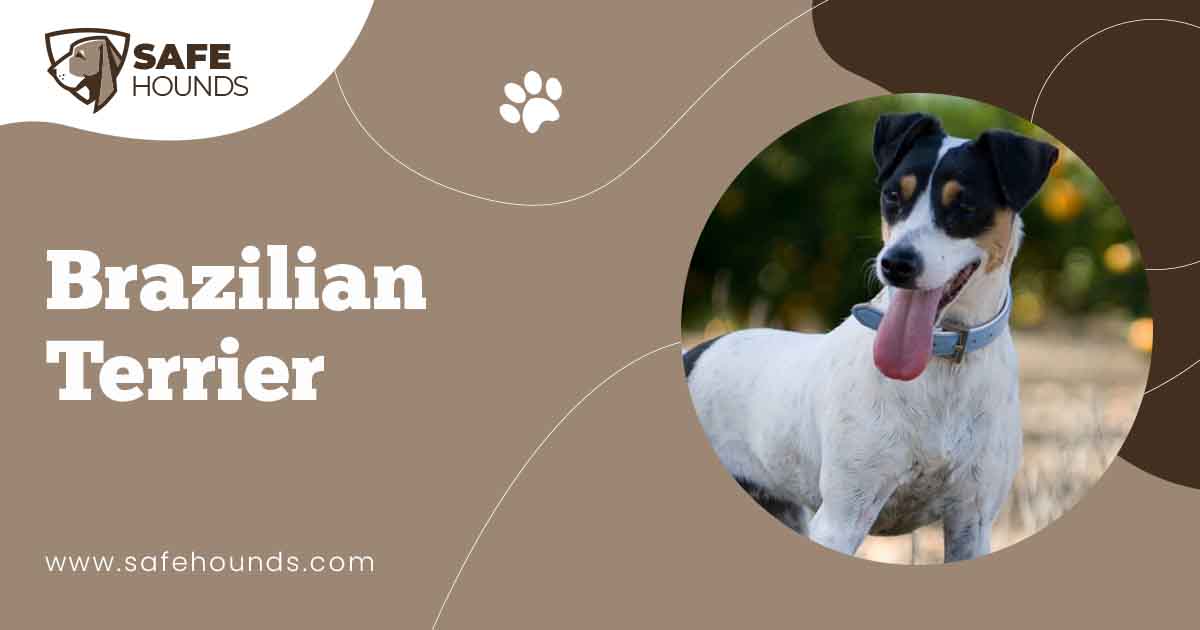 A small tricolored terrier type dog, one that has a very similar appearance to a Fox Terrier is amusing its master and the children with its clownish antics, a similar dog is ridding the farm of vermin. Still, another dog is making the presence of an intruder known with its shrill incessant barking. These dogs are Brazilian Terriers, a breed that was developed in the early 19th century presumably from the small terrier type dogs that were brought home by Brazilian students studying in European universities.

A prospective owner may ask, Why should I choose a Brazilian Terrier? There are actually several reasons. This breed with a tricolored coat has an elegant appearance but the dog is valued more for its working abilities and for its admirable temperament. Frisky, perky, alert intelligent, very loyal and always playful these are apt descriptions for a Brazilian Terrier. These qualities make this breed an outstanding home companion. The dog is constantly on the move, never tiring and would remain playful like a puppy through out its life. But all is not play for this breed as it is also admired for its work ethics. A Brazilian Terrier forms a strong bond with its human family but it will always choose to chase rats over being cuddled and patted by its master. The Brazilian Terrier is also known as Fox Paulistinha but the breed is more popularly known as the dog of the common people. The Brazilian Terrier is a rather small dog weighing between 15 and 20 pounds. But they are excellent watch dogs the smallest sound or the slightest movement will never escape the dogs attention. This dog will never fail to announce strangers with its barking but the small size may not be very intimidating to intruders. This is why Brazilians usually keep both a Brazilian Terrier and a Fila Brasileiro. The terrier will serve as a lookout and once the alarm is sounded, the Fila will finish the job. This breed was originally developed to hunt and known to have above average hunting skills. A Brazilian Terrier is hunted singly or in packs. When hunted in packs these dogs would surround and terrorize the game until the animal submits.

The Brazilian Terrier is a medium sized dog with a slender well balanced body. The dogs appearance is typical to that of a Fox Terrier. To the uninformed the breed may be mistaken for a Fox Terrier as both have almost the same coat color but this breed is distinguished by the graceful clean curved lines of the body. This dog has a triangular shaped head. The round skull has a moderately flat forehead. The stop is well developed. A Brazilian Terrier has a dark colored nose with wide nostrils. The cheeks are well developed. Well developed regularly set teeth meet in a scissor bite. Roundish dark well opened eyes are set well apart. Eyes have a keen expression. Bluish coated dogs have bluish grey eyes and brown coated ones may have brown, green or blue eyes. Triangular ears are set on laterally. Ears are half pricked with the folded pointed tip pointing to the eyes external corners.

Clean, dry and slightly curved neck is of moderate length and set harmoniously to the head and to the trunk. The well balanced square shaped body of this dog has clean curved lines. The well pronounced withers are well connected to the forelegs. The topline as well as the loin is firm and straight. The long chest is deep, reaching the level of the elbows. Ribs are well arched. The low set tail is rather short and is usually carried gaily but not over the back. In its country of origin, the tail is usually docked.

This breeds hair is similar to that of a rats. The short, smooth hair is laid very close to the body so that the skin can hardly be seen. Hair is thinner on the head, neck, ears, on the underside of the neck as well as on the lower and inner parts of the forelegs and on the backside of the thighs. The predominantly white coat has black, brown or blue markings. Tan markings may also be present above the eyes, on the side of the muzzle, inside and on the edge of the ears. This breeds beautiful tricolored coat is made even more appealing by a white blaze.

The Brazilian Terrier is a highly adaptable breed. The dog can live in a city, in a small home or in the country. But one thing is of vital importance, the dog needs to be with the person the dog considers as its master and one that it loves most. Because the dog has high exercise requirements, the owner would need to provide more time to exercise the dog. A home in the country would be more suitable for this breed. This breed is friendly to children. Brazilians consider the dog as a gentle and dependable nanny. A Brazilian Terrier however, would need obedience training and socialization. Apart from being territorial, this breed has a high prey drive. Obedience training will prevent small dog syndrome and will train the dog to look up to the master as the leader of the pack. Socialization will curb the dogs tendency to be dominant with other dogs and restrain its tendency to chase smaller pets.

A Brazilian Terrier is a low maintenance breed. The good condition of the short coat would be maintained with a once a week brushing. Bathing may be done twice a month using mild soap. However, this is an energetic and curious breed. Brazilian Terriers have the inclination to raid garbage cans, to dig and to roll in obnoxious smelling things. A smelly and dirty Brazilian Terrier would certainly need a bath. This healthy breed has no known major health concerns and is expected to live for 12 to 14 years.

Brazil is the home of two internationally recognized breeds of dogs. One is the Fila Brasileiro, a Molosser type that is commonly found in cattle farms and large plantations. This giant breed is a dependable cattle dog and estate guard. The other breed that calls Brazil home is the Brazilian Terrier also known as Fox Paulistinha. In its country of origin, this breed is popularly known as Terrier Brasileiro. The name Fox Paulistinha is translated as little fox terrier of Sao Paulo although the dog is found all over Brazil. This breed has existed in Brazilian soil for more than a hundred years.

Jack Russell Terriers that were brought to Brazil from Europe during the late 18th century prominently figured in the development of this breed. These Jack Russell Terriers were crossed with Chihuahuas and with Miniature Pinchers as well as with other small breeds. The years that spanned the late 18th century and the early 19th century were the development period of this breed. It was during these years that the Brazilian Terrier has developed its own distinctive looks. In spite of the size, these tough dogs have earned a reputation of being passionate hunters and superb ratters. Because of the lively and the amusing ever curious temperament, the dogs became a favorite home companion. The Brazilian Terrier has gained enormous popularity. But as with any other breeds, the Brazilian Terrier too has suffered ups and downs. In 1960 the Brazilian Terrier club was formed with the main objective of promoting and improving the breed. Also during this time the breed was recognized by the CBKC (Confederação Brasileira de Cinofilia) The first attempt to have the breed internationally recognized was made in 1964 although it was cancelled due to the very low number of records. The breed has existed for more than a hundred years but it was only registered in 1973. Unfortunately, the popularity has declined so much and on the same year CBKC withdrew official recognition. The Brazilian Terrier Club has stopped its activities thus registration was suspended by CBKC and the breed was declared a dead breed.

However, this small working terrier has remained popular with ranchers and farmers. Breed fanciers have made efforts to keep the stud books alive. Through the concerted efforts of the breeders and through the dedicated and able leadership of Marina Vicari Lerio, the Fox Paulistinha Club president, CBKC again recognized the breed and breed registration was reopened in 1994. Also during this year, the Brazilian terrier gained international recognition when it was officially recognized by FCI.