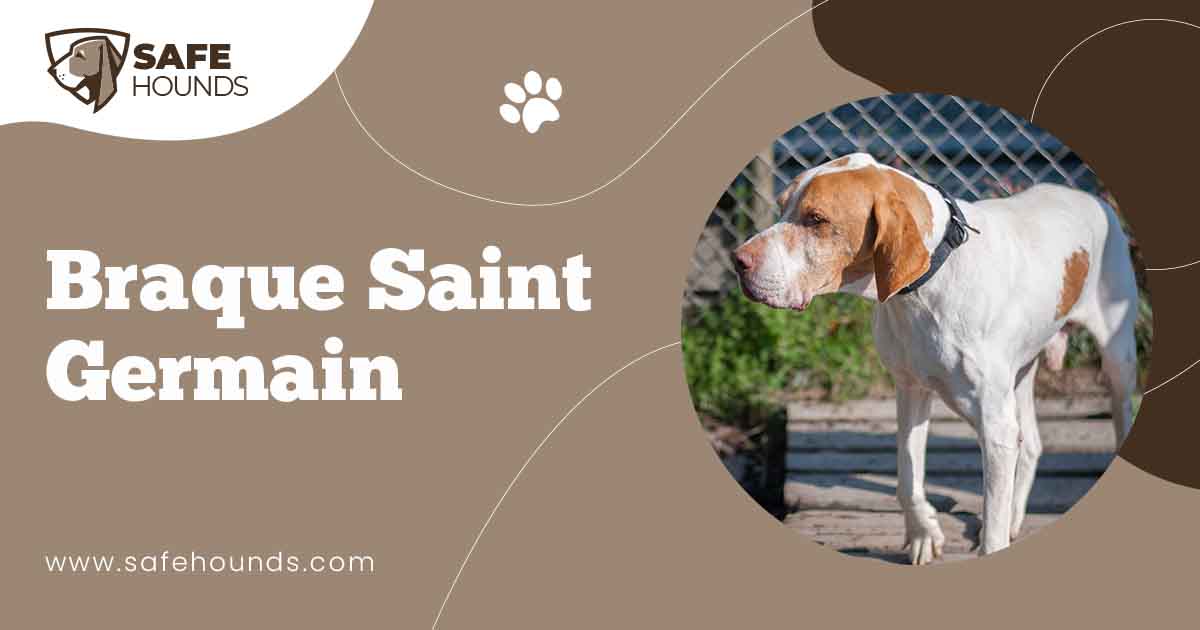 The Braque Saint Germain or the Saint Germain Pointer as it is also called is a medium sized dog that has a predominantly white coat with orange patches or ticking. This is a well muscled and well proportioned breed, one that has a graceful athletic appearance. The Braque Saint Germin is thicker skinned and bigger boned that its cousin the French Pointer. This breed is also faster and considered to be a better runner than the French Pointer. The Saint Germain Pointer is the only breed of pointer that would not need tail docking.

A Saint Germain Pointer is a top notch hunter. Primarily developed to hunt pheasants and rabbits, the dog is well adept in pointing and retrieving in open fields, in woodlands and in any type of terrain even in swamplands. The dogs coat does not provide adequate insulation when wet but this would not deter the dog from retrieving prey from water. As the dog can not tolerate cold weather it would be up to the master and the hunter to stop the dog from retrieving in marshes especially during the cold season.

The Braque Saint Germain breed was created around 1830s when native French dogs were mated with the English Pointers that were given to Frances King Charles X. The breed was initially given the name Compiegne Pointer. Up to this day, some dog enthusiast would still call the breed by this name. The name of the breed was changed to Saint Germain Pointer when the dogs were taken to the forested areas of Saint Germain for further development. A Saint Germain puppy would be hard to find given that this breed is still considered to be rare up to these days. 90% of the breed population can be found in France, its country of origin.

The Braque Saint Germain is a medium sized gundog. However this breed is heavy boned, well muscled and noted for its supple gallop. This gives the dog the endurance needed to work the field. This dog has a lightly rounded skull and a stop that is not very prominent. The muzzle has the same length as the skull. The broad nose is pink in color and has well opened nostrils. Large well opened eyes are well set in the eye sockets and golden yellow in color. Eyes have a gentle, kind and candid expression. Medium length ears with rounded tips are set level with the eyes and hangs down slightly apart from the head. The lips that completely envelopes the lower jaw do not have black spots. . The dog has strong jaws and teeth that meet in a scissor bite. The tail that is set rather low has a thick base and tapers to a point. The tail is usually carried horizontally.

A Saint Germain Pointers neck is rather long, well muscled and a bit arched. The neck can have a slight dewlap. The dog has a horizontal back and a rather short but broad and strong loin. This breed has broad deep chest, well sprung long ribs and a belly that is slightly tucked up. The long and well muscled forelegs and the well positioned hindquarters give the dog a supple and well balanced gallop. The dogs coat is short, thick, fine and glossy. The predominant dull white coat can have bright orange patches and mottling.

The Braque Saint Germain is a through and through hunter. The dog hunts pheasants, woodcock and partridge in any kind of terrain with passion. The dog retrieves with a soft mouth. This dog is a willing and tireless worker. A Saint Germain Pointer is affectionate, obedient and loyal to the master. Once the dog gets attached to the human family, it would show great affection. The dog is gentle and friendly with children although it can be reserve with strangers. This breed would tolerate dogs and other pets. This makes the dog a fine family pet and a reliable watchdog. A Braque Saint Germain however can be stubborn at times. Obedience training as well as socialization is necessary to develop the dog into a well mannered one. This is an easy breed to train and would not suffer from occasional harsh treatment while training.

A Braque Saint Germain is a breed of dog that would need very minimal maintenance. Because the coat is short, an occasional brushing and rub down would be sufficient to maintain the good condition of the hair. However the dogs coat does not provide sufficient insulation. The dog would tolerate hot weather but not extremely wet and cold weather conditions. An owner must ensure that the dog is not taken hunting during extremely cold weather. Just with any other hunting dogs, the ears of the Saint Germain Pointer must be cleaned regularly.

Elegant dogs with white and orange coats and with a fine nose have existed even before the reign of Frances King Charles X (1824-1830). The description that aptly fits the features of the Braque Saint Germain only shows that the breed really existed before King Charles time. However, it was commonly believed that the breed originated when Mr. Girardin, the kings chief huntsman have crossed the native orange and white hunting dogs with the English Pointer that were given by the King of England to the King of France. The two pointers were named Miss and Stop. The progeny of these mating were described to have an elegant form, heightened scenting abilities and distinctive appearance.

The middle class revolt in July 1830 caused King Charles to leave the throne. The dogs were given to Baron Laminat. The baron is the chief inspector of the Compiegne forest, north of Paris. Stop died and only Miss was bred with a brown and white Braque Francais. Zamor, one of Miss offspring produced white and orange coated puppies with pink noses and lips. Marquis de Cherville described the dogs as large elegant dogs that are fast and with a high nose. Since these dogs were bred in the area of Compiegne, they were named Compiegne Pointer. The breeds name was changed to Saint Germain Pointer when the kennels was transferred to the forested area of Saint Germain in 1830. From then on Braque Saint Germain became the official name of the breed.

The breed was widely accepted and gained tremendous popularity. In 1913 an official club for the breed was formed with the main objective of promoting the use and improvement of the Saint Germain Pointer breed in France as well as in other countries. The club has successfully accomplished the goal. Breeders of the Saint Germain Pointer can be found throughout France.

However, the outbreak of World War 1 made a huge impact on the population of the breed. Numbers of Braque Saint Germain was drastically reduced. The breed has not recovered from this set back. Another attempt was made by breeders to revive the breed in 1930s but the 2nd World War that raged throughout Europe again took its toll on the numbers of existing Braque Saint Germain.

Presently, the breeds numbers was increased. The Braque Saint Germains popularity is gaining grounds. Because of the breeds outstanding qualities it has never lost its loyal following of trialers and hunters. The national breed club has again undertaken the task of improving the breeds field abilities.

The aftermath of the two World Wars made this breed quite rare. Up to this day the Braque Saint Germain is still unknown outside of France. However because the breed is a hardworking and versatile gundog as well as an affectionate and loyal home companion and family pet, it is a favorite among French people. The Braque Saint Germain may have a small population but it is far from being extinct.