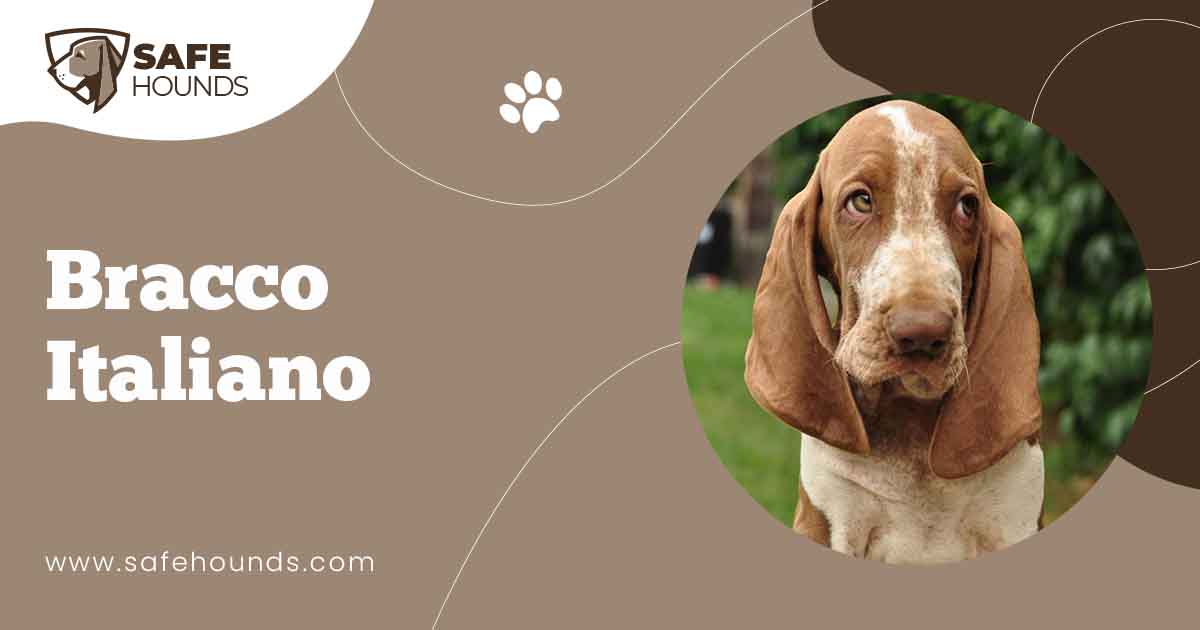 To an Italian hunter bagging game constitutes only half the fun of the hunting expedition. The other half is watching the hunting companion- a Bracco Italiano at work. A Bracco Italiano is a beautiful dog but more beautiful is seeing the dog work the field. A Bracco in full trot, nose in the wind searching for game and finally locating one is beauty in motion. In Italy, the Bracco Italianos country of origin, the dog is acclaimed and taken seriously only if it has proven its worth as a worker.

Also known as Italian pointer and Italian Pointing Dog, Bracco Italiano is an ancient breed of dog as evidenced by the fact that the dog was mentioned in writings that dates back to the fourth and fifth centuries BC. Centuries ago Italian hunters use nets to snare wild game. The Bracco Italiano was developed specifically for the purpose of driving game into the nets of the hunters. The dogs role was changed to that of a hunter, pointer and retriever when gun was invented. Up to the present time, the Bracco is considered to be one of the most versatile gun dog.

There are actually two Bracco Italiano variations – the Piedmontese Pointer and the Lombard Pointer. The Piedmonts are lighter in build and sports the orange and white color. The lighter build is probably due to the fact that Piedmont has a mountainous terrain as it is surrounded on three sides by the Alps. The Lombardy is known to have white and brown color and have a thickset body. Both variations are known as a single Bracco Italiano. Bracco is the Italian word for hound.

The Bracci are common in Italy but considered quite rare in other parts of the world. The dog has an athletic and well balanced appearance. These intelligent dogs however, are loyal and gentle especially with the children. Their quietness and gentleness belies their powerful appearance. But be wary of their mournful eyes and their pendulous upper lips that give the dogs their serious expression. Although considered to be a people dog, Bracco Italiano can be very obstinate and hard to train especially if harshly reprimanded. Because of the inherent intelligence a Bracco is known to go deaf especially if it wants to do its own thing.

Bracco Italiano may be an excellent hunting, pointing and retrieving dog, but it can not be considered to be an effective guard dog. Being a people dog, Bracci are friendly with every one. They will warn you about intruders but they will never bite.

A Bracco matures at the age of two and a half years and grows to the average height of 22½ to 26 inches for males and 21½ to 24½ inches for females. Average weight is 55 to 88 pounds for both dogs and bitches. A Bracco Italianos life span is from 12 to 13 years.

Bracco Italiano is an ancient breed of dog that has a noble appearance. The short dense coat is fine and glossy. The coat is a bit rough to the touch although softer and finer on the dogs head, ears, legs and feet. The white color of the coat would have brown and orange speckles or patches on the dogs body, head, and ears and at the base of the tail.

Bracci are lean and muscular dogs. They have an almost square appearance as the height measured at the withers is almost the same as the length of the dogs body. The broad chest that reached to the level of the elbows, the well sprung ribs, the well muscled broad and slightly curved loin as well as the well rounded neck gives the dog a powerful appearance.

The dog has a mournful expression because of its thin face with the drooping wrinkled skin around the sides of the face, on the chin and on the neck. The dogs sad expression is further enhanced by the soulful look of the oval brown or dark ochre colored eyes. The long drooping ears reach the tip of the brown or pink nose. The narrow based ears have rounded tips and lies close to the dogs cheek. Bracco Italiano has strong jaws and perfectly formed teeth that meet in a scissors bite. The long tapering tail is often docked. Tail docked to half its length covers the genital. It is carried horizontally when the dog is moving.

Bracco Italiano dog are working dogs. Born for hunting, they are known to be agile and untiring. Because of their extraordinary scenting abilities they make valuable and dependable hunting companions. These dogs are highly intelligent as they can make the distinction between work and play and thus act accordingly. Their boundless energies make them powerful hunting dogs that can untiringly work the fields. These dogs however can be very docile inside the home. From a vigorous and avid worker, these dogs can easily transform into affectionate, obedient and easy going pets. Bracco Italliano dogs are people dogs that are known to be most affectionate and gentle with the human family especially with the children. They would love to play with the children and nothing would make them satisfied that being included in family activities. These dogs can get along with other pets too.

Bracco Italiano excels in hunting but they would make poor guard dogs. They are friendly almost with everyone and the least it can do to warn you of intruders is to bark. These dogs dont bite and they would only be alert if they known that it is time to work. This breed needs to be socialized and to have obedience training where they will be made to respond to the owners whistle. Obedience training however can be a challenge as these dogs are known to be stubborn. They may be highly intelligent but they are known to turn a deaf ear especially with harsh training methods. Trainer must be firm and patient.

Bracci are not suited for apartment dwellings. A rural setting is more suitable as they will have ample space to explore, to exercise and to burn their excess energies. These dogs need excessive amount of mental stimulation and physical exercise and this is not possible is the dog is cooped in an apartment building.

Bracco Italiano is not a high maintenance dog. Very minimal care is necessary. Brushing the short dense coat regularly with a firm bristle brush will remove dead loose hair. Bathe the dog only when necessary. Ears must be checked and cleaned regularly to avoid ear infection.

Bracco Italiano is speculated to be the oldest gundog breed not only in Italy, its country of origin but in Europe as well. There are two native Italian breeds – the Bracco Italiano and the Italian Spinone. Both belong to the hunt, point and retrieve breed.

Bracco Italiano is believed to have existed during the 4th and 5th centuries. Famous people like the Roman statesman Pliny, the Greek writer and philosopher Xenophon, as well as Dante, the illustrious author of the Devine comedy have referred to the dog in their writings. Cellini, the famous Italian artist during the Renaissance period featured Bracco Italianno in his works. Bracci are most sought after by the aristocracy as these are excellent dogs used for hunting feathered game. These dogs are specifically bred and trained to drive feathered game to the nets of hunters.

Bracco Italiano is believed to have developed from cross breeding a Segugio Italiano and the Asiatic Mastiff. The Celtic hounds of Gaul and the sighthounds brought by the Phoenicians are the ancestors of the medium sized and wire haired Segugio. The Asitic mastiff is an old breed that is believed to be the precursor of many present day breed.

There are two Bracco Italiano variations. The lighter colored breed exists in Piedmont and the one that sports a darker coat is from Lombardy. In spite of this fact, the number of existing Bracci enormously declined. The breed almost became extinct. Thanks to the efforts of Italian count Ferdinando Delor de Ferrabouc (1838 -1913) the breed was saved from extinction. In 1949, the Italian standard for the breed was released.

Bracco Italiano was imported to England in the spring of 1989 by Jonathan and Liz Shaw. The couple attended a field trial in Italy in 1988 and was fascinated and impressed by the Barro Italiano breed. The Bracco was named Zerbo. From then on, other Bracci were imported to UK where the dogs were predominantly used as companions. Some dogs though are made to participate in field trials, working trials as well as track and search works. These dogs were also used as therapy dogs.

The numbers of Bracci have steadily increased though they are still considered to be rare. The breeding objective is more on quality rather than quantity. Bracco Italiano is most valued as a hunting and working dog. These dogs have developed into steadfast companions and affectionate and gentle family pets but it should be realized that first and foremost a Bracco is a hunting dog and nothing would make this dog happy than being given the task to work.