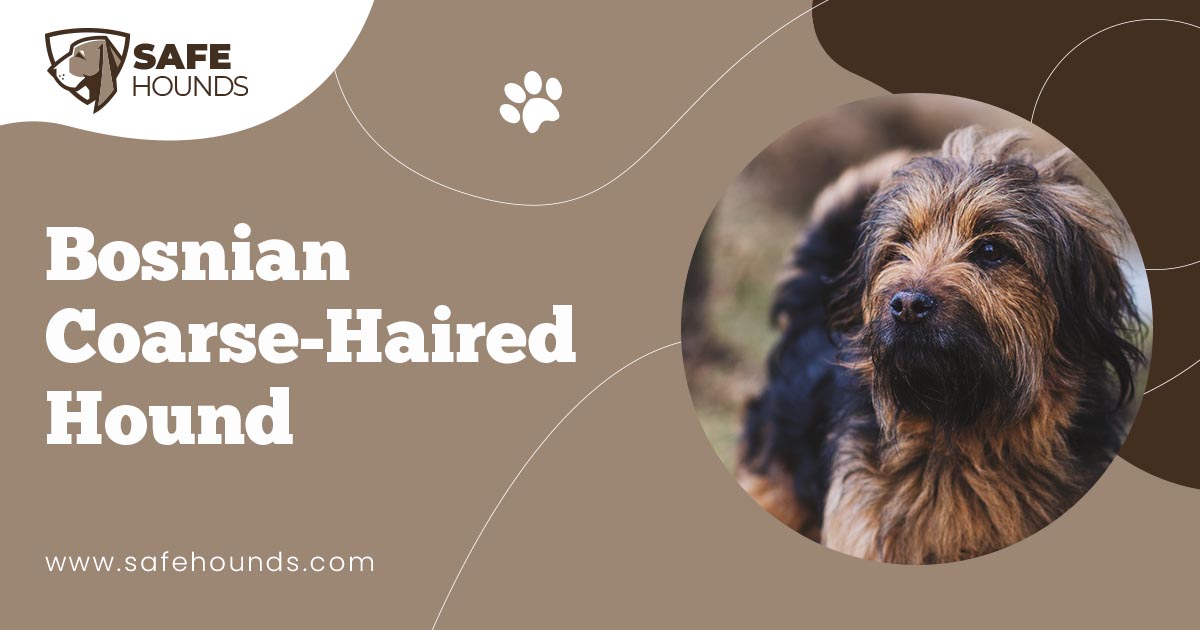 Bosnia and Herzegovina is the country of origin of the scent hound created by Bosnian hunters in 19th century. This breed is very similar to the Griffon Nivernais, in fact some dog experts believe that this breed has griffon blood in its veins. This breed was once known as the Illyrian Hound until it was recognized by the FCI in 1965 and the name was changed to Bosnian Roughhaired Hound.

The mountains in Bosnia-Herzegovina teem with foxes, hares, wild boar and a variety of large and small game. The terrain however is very rough and hostile. Add to this is that fact that winter in this country is extremely cold. The Bozanski Ostrodlaki Barak was primarily developed by Bosnian hunters to withstand the very cold, rainy, snowy and windy winters in Bosnia-Herzegovina. The shaggy coat with very thick undercoat provides an insulation that enables the dog to endure extremely cold weather. The Bosnian Coarse-Haired Hound is a robust well muscled dog that shows excellent agility even when running and scaling rough and hostile terrain.

Barak is a Turkish word that means coarse or rough haired. Baraks are hound dogs that are utilized by hunters to chase the prey, to prevent the prey from getting away until the hunter arrives to kill the game. In Bosnia a brakirci is a dog that continuously barks while chasing a game. The Bosnian Roughhaired Hound has a loud sonorous voice and long confident strides that makes it a most sought after hound by the Bosnian hunters.

A Bosanski Ostrodlaki Batak is a medium to large sized dog whose body length is approximately 10% longer that the height. This is a robust dog with a broad and muscular back, a chest that is long and average in width. The tucked up belly and the deep chest give the dog a muscular and well proportioned appearance.

The dog has a slightly convex forehead. The long and strong muzzle is wide at the base and tapers to a large black or dark brown nose with well developed nostrils. This rectangle shaped muzzle is covered with a beard and bushy moustache. Tight thick lips enclose teeth with full dentition that meet in a scissor bite. Eyes are chestnut brown, large and oval in shape. The eyes have a serious and intelligent expression but very bushy eyebrows give the dog a comic and playful look. The pendulous ears are set on high, quite thick, broad and long.

A Baraks skin is well pigmented, tight fitting but elastic and covered by a thick double coat. The undercoat is dense and downy. The shaggy overcoat is long, rough and tousled giving the dog an unkempt appearance. Coat colors can be wheaten yellow or reddish yellow. Some dogs would have earthy gray or blackish hued coats. A white blaze or a white star on the head enhances the good looks of the dog. Some white marking would appear on the chest, below the neck or on the legs of the dog. Some specimens are bi-colored, others are tricolored.

The Bosnian Coarse-Haired Hound is no doubt one excellent hunter. The dog is handsome too. It has a regal appearance that does not fail to draw attention. This makes the Barak excel in dog shows. The dog is ferocious and persistent while hunting but a Bosnian Roughhaired Hound is also known for it peaceful, affectionate, calm and gentle demeanor. These qualities make the dog an excellent and dependable home companion. These are courageous dogs that can be trusted to protect the family and the property.

Being inherently lively, these dogs make excellent playmates of the children. A Bosnian Roughaired Hound is gentle and tolerant with children. This dog gets along well with other dogs and smaller pets. However, consistent training conducted by a firm owner is necessary.

The Bosnian Roughhaired Hounds are working dogs. They are accustomed to roaming the mountains to hunt. Apartment living is not for this breed as they would need a large space to exercise.

For hunters, the dogs ability to hunt takes precedence over the appearance. Baraks that are solely used for hunting would need very minimal care. A once a week brushing would take care of the tangles as well as remove dirt and burrs accumulated while the dog is hunting. A show dog or a pet however would need more care and maintenance. The rough coat of the dog should be brushed daily to avoid the formation of tangles. This kind of coat should be plucked and not trimmed as it would destroy the texture and the color of the coat. The usual teeth brushing and ear cleaning must be done whether the dog is a pet or mainly used for hunting.

The origin of this breed similar to other ancient breeds is cloudy as there was no written documentation. A known fact is that the dog was created by Bosnian hunters who are in need of a hunting dog that can withstand the hostile terrain of the Bosnian Mountains as well as endure the extremely harsh climate, a dog that will have the agility and the speed needed to find the game and to hold the found game at bay until the hunter is given the chance to go for the kill.

This breed was once called the Illyrian Hound until the name was changed to Bosnian Roughhaired Hound in 1956 when the breed was officially recognized by FCI. This breed is most valued by hunters in Bosnia. The dog has developed into excellent and affectionate home companions. The dog also bagged awards in dog shows. In spite of this, the Barak is still considered to be a rare breed. The dog is not found outside of Bosnia.