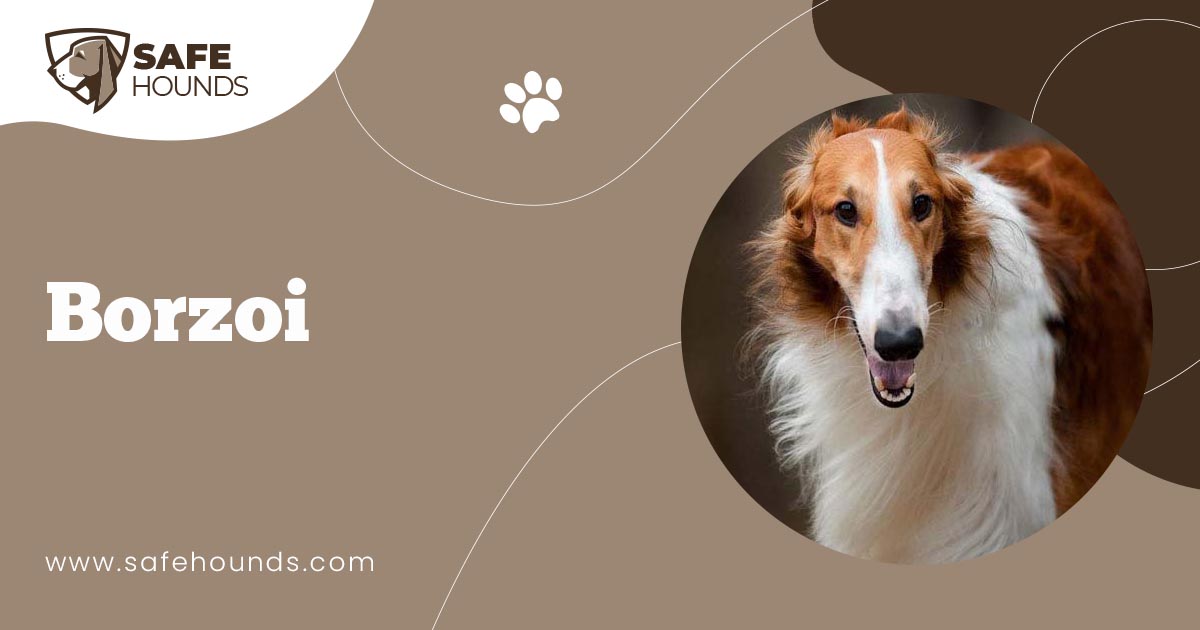 The Borzoi is a breed of dog also called the Russian Wolfhound, a member of the sighthound family. A sighthound, also called a gazehound, is a dog that hunts purely by speed and sight, unlike scent hounds, which most people are more familiar with, that hunt by scent.

Speed is very important, as the dog can only track its target as long as it can be seen. Scenthounds go on scent, which can last up to 100 hours, but Sighthounds have a more delicate job than that. They must keep sight on it, track it down, and catch it, without once losing sight of it.

The plural form Borzois may be found to be a correct version, but the Borzoi Club of America asserts that Borzoi is the preferred form for both singular and plural. As the alternative name suggests, the Borzoi was originally developed, bred, and specialized in Russia.

The name Borzoi comes from the Russian word Borzói, which means swift or fast, or borzaya, which means quick dog. There are also Czech and Serbo-Croatian words that are spelled similar with similar meanings that can also be attributed as to why the canine is known by that name so widely.

The Borzoi has often been compared in appearance and temperament to the Greyhound a fellow sighthound. The Borzoi is a tall, almost aristocratic type canine. Its head is thin, long, and narrow. It has a slightly arched muzzle. The tail is long, low-hanging, and curved. Its nose is black and its eyes are oblong and dark. The ears lie flaccid and low on the neck but may prick up partially when the dog is in an alert state. Its back is gracefully curved, and its chest is narrow, but very deep.

The long, soft, silky coat of the Borzoi may be wavy or have large curls, with a heavy mane at the neck. The coat can be any color combination. Normally, the colors are white, golden, tan, or gray with black markings, in either solid or mixed colors. Its soft undercoat thickens during cold weather for warmth, and sheds to keep the dog cool in the warmer weather.

The Borzoi is very large compared to other fellow sighthounds. Males can weigh over one hundred pounds and stand over 28 inches tall at the shoulder. Females do not stand much more than 27 inches tall or weigh much more than 90 pounds.

Despite the large size, the Borzoi has much agility, strength, speed, and grace about it. When it walks, it walks gracefully. When it runs, it runs almost flawlessly, which is important, because it works only off sight. It only has so much time to act before it loses its target.

The Borzoi is a calm, clever, reasonably active, independent dog. It adapts very well living inside with a family, provided they have room to roam and regular opportunities for exercise. Most adult Borzois are almost mute, barking only when necessary. They are gentle, sensitive dogs with a natural respect for humans. Borzoi will never display a desired dominance over humans.

Many Borzoi do well in obedience and agility training, but it does not come naturally to them. They are fast learners that need to be challenged. They quickly become bored with repetitiveness and can be very stubborn when they are not properly motivated. They cannot understand or tolerate harsh treatment or training based on punishment and will be very unhappy.

These dogs are trained to hunt using sight and have a strong instinct to chase things that run from them. The Borzoi are built for speed and can cover incredible distances in a very short time.

The Borzoi does not have a strong territorial drive, nor will it defend the home against an intruder. However, they have the intelligence to outsmart a predator. It is quite common for Borzoi at play to run down another dog, seizing it by the neck and holding it immobile. Young Borzoi pups do this with their littermates, trading off as to who is the prey. They do this as an inbred hunting behavior instead of as a territorial behavior or for fighting purposes. Borzoi can be raised very successfully to live with other animals provided they are introduced to them at a young age.

Life expectancy for the Borzoi is 11 to 13 years. Females live longer than males habitually. Many Borzois have lived to be around 16 years of age. For a longer life, strong physical activity throughout the life of the dog is necessary. The more exercise, the healthier the dog will be in old age.

The only grooming necessity is for regular brushing. Hair will get tangled or gain loose particles the dog needs combed out.

Few illnesses plague this breed as compared to other breeds. The few that do affect this breed are Osteochondritis Dissecans, Hip and Elbow Dysplasia, Gastric Torsion (or bloating), Cardiomyopathy, Cardiac Arhythmia, and Progressive Retinal Atrophy. All of these diseases are somewhat rare, and most are preventable with regular exercise.

Only two small meals a day are necessary. You should only feed the Borzoi as recommended by your vet, as overfeeding can become a problem as bloating can occur very easily.

Tradition says that Saluki type sighthounds were originally brought to Russia from Byzantium about the 9th and 10th centuries and again later by the Mongol invaders from the East. The imported sighthounds were crossed with Russian spitz type hunting dogs to increase speed and gain an ability to catch wolves. This was an important part of a hunting dogs work back when wolves were more common in Russia. Borzaya, translated to mean quick dog, is the Russian term for the various types of native sighthounds. The Russian breed Russkaya Psovaya Borzaya (Psovoi, the longhaired Borzoi in Russian) is the dog we know today as the Borzoi. The Borzoi was popular with the rich and powerful in Russia. For centuries, Borzoi could not be purchased but only given as gifts from the Czar. The most famous breeder was Grand Duke Nicholas Nicolaievich of Russia, who bred hundreds of Borzoi at Perchino, his private kennel.

During the era of the Czars, the hunters that owned Borzoi performed hunting tests with them. As well as providing exciting sport, the tests were used for selecting prime breeding stock. Only the quickest and most intelligent hunting dogs went on to breed. The dogs were expected to be able to join in these hunts sometimes for days on end. The Borzoi, accompanied by mounted hunters and Foxhound, would chase hares and other small game. However, the hunters especially loved to test their dogs on wolves. If a wolf were sighted, the hunter would release a team of Borzoi. The dogs would chase the wolf, attack its neck from both sides, and hold it until the hunter arrived.

In the 1917 Revolution (the overthrowing of the Russia czarist aristocracy), hundreds of native Psovoi were destroyed by the revolutionaries. The Czars had turned them into a symbol of tyranny, and they were not welcomed into the Soviet Union under new rule. Some took it upon themselves to shoot their own dogs. They would rather do that than allow them to fall into the hands of militants and be tortured. However, the Borzoi survived along with other Borzaya variants in the Russian countryside (Hortaya Borzaya, or Chortaj, the short-haired Borzaya, and Stepnoy, a lop-eared Borzaya with feathering, similar to the original Saluki breed).

A Soviet solder, Constantin Esmont, sometime in the late 1940s kept detailed records of all the varying types of Borzoi dogs that he discovered in the Cossack villages. Esmont was concerned that the distinct types of Borzoi were in danger of extinction. He convinced the Soviet government that the Borzoi was a valuable asset to the hunters and the fur industry. For those reasons, breeding was officially regulated. Currently, the Borzoi are highly valued hunting dogs.

During the Soviet era, the Borzoi were not exported as much. However, enough had been taken to a few select countries in the late 19th century for the breed to establish itself outside Russia.