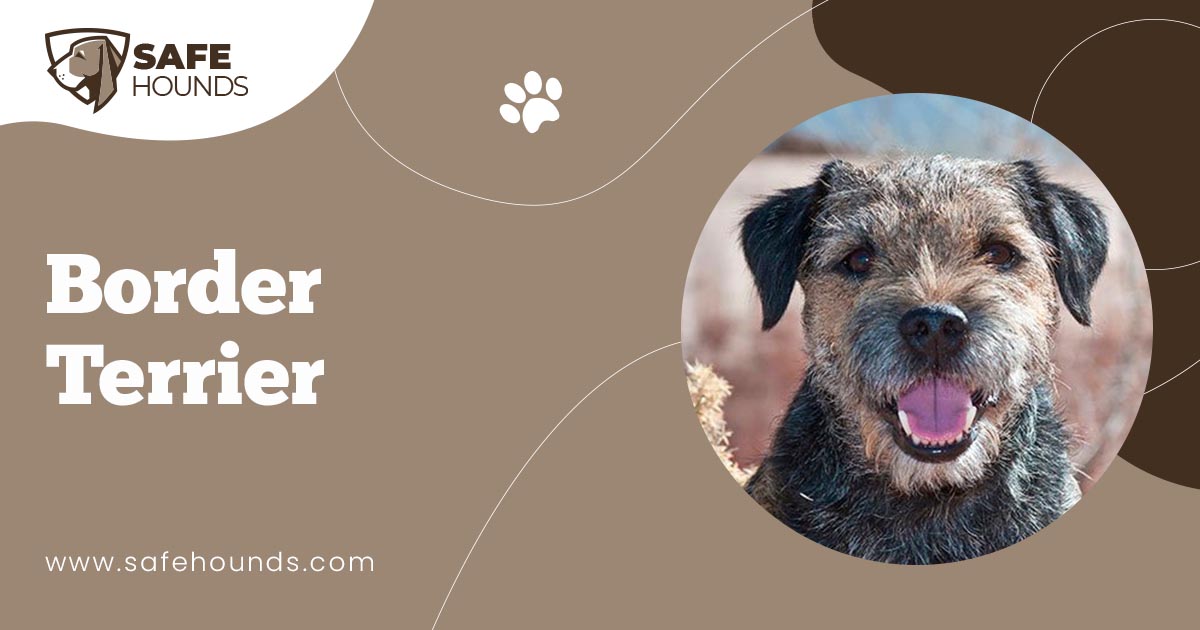 Perhaps one of the most famous dogs of all time (third to Lassie and Old Yeller), Toto from The Wizard of Oz, is a Cairn Terrier. In the 1985 animated movie Return to Oz, Toto was fashioned from a Border Terrier. Toots, co-star to Lassie, was also a Border Terrier.

The Border Terrier has medium bone structure, strongly put together, suggesting endurance, and agility. However, it is rather narrow in shoulder, body, and quarter. The body is covered with a somewhat broken though close-fitting coat. The characteristic otter head with its keen eye, combined with a body poise, which has an alerted look, gives a look of fearless and implacable determination characteristic of the breed. Border Terriers are light in weight. Males weigh only 13 to 15½ pounds. Females weigh only 11½ to 14 pounds. The height at the withers is slightly greater than the distance from the withers to the tail.

The head is similar to that of an otter. Eyes are mostly dark hazel and moderate in size, neither prominent nor small and beady. Ears are small, V-shaped and of moderate thickness. They are not set high on the head but somewhat on the side, and dropping forward close to the cheeks. They should not break above the level of the skull. The muzzle is short and often dark. A few short whiskers are natural. The nose is black. Both the nose and teeth are somewhat large in proportion to the size of the dog.

The neck is clean and muscular, in order to give a slightly muscular, well-balanced appearance. It should gradually widen into the shoulder. The underbelly is fairly straight. The tail is moderately short, thick at the base, then tapering. It is carried high when at the alert, but not over the back.

The coat is short and rough. Its undercoat is short and dense. The topcoat is very wiry and somewhat broken, and does not curl or wave. A Border Collies coat can be of several different colors: red, grizzle and tan, blue and tan, or wheaten.

Border Terriers are friendly, smart, energetic, and playful. They can make good pets, as they are generally good with children. If their owners cannot give them a lot of attention, they are best kept with other dogs of similar temperament.

Some Border Terriers act almost like a home alarm system, due to their sharp hearing and the distinctive barking that results when they hear someone approaching the door.

They especially like jumping a lot, and a lot of times, when owners first buy their Border Terrier they sometimes find that they are woken up by their dog licking them in their bed! Some Borders like to lick. The key to training a Border Terrier is through its heart. They are big-hearted little dogs that love their owners. This quality, combined with their unmatched intelligence, causes them to copy what their owners do. Sometimes this will seem cute, and other times it will be an action that is unacceptable for the dog to do.

The main thing to remember when training a Border Terrier is that what they are given attention for, they will repeat. Their high ability to be trained makes them follow commands and accept criticism for unwanted behaviors. Consistency is vital, if their owner gives in even once, they will likely believe that owners do not always mean what they say. It can take much work to reverse this effect. For this reason, it is important that owners establish an understood authority role early.

Border Terriers love to chew. If an item is able to be damaged, a Border Terrier can damage it quickly, so it is necessary to keep things out of the dogs reach.

They act with the temperament they perceive from their owners. They do not demand exercise, but do love it when they get it. If a Border Terriers owner is sick for a week it will likely curl up at his or her feet and not move. Rattle its lead however and it will quickly become energetic.

The coat should be stripped by hand regularly, never clipped, as the top coat becomes long and shaggy and eventually dies. Borders being shown generally have a short coat that has been stripped and is starting to grow back. Never clip a Border Terriers coat, except around the face area where there are scraggy bits of hair. Clipping a Border Terriers coat around its back or underbelly may ruin its fur and make it go curly. After clipping, a Border Terriers coat may never return to its normal consistency. Clipping also encourages coat and skin problems as the dead hair is prevented from falling naturally, changing due to the temperature of the climate the canine is being exposed to.

Due to the emotional sensitivity and loving temperament of the dog, much love and care are necessary. When domesticated, the dog thrives on love and affection. This dog can likely die if neglected for too long.

The breed was developed in the area around the border of England and Scotland. The main purpose was for hunting and killing vermin and other pests. Though some claim the Border Terrier has some sort of ancient history, no breed of Terrier is very old. The Border is no exception, first appearing around 1860.

The first Border Terrier ever registered by the Kennel Club was The Moss Trooper, a dog sired by Jacob Robinsons dog Chip in 1912 and registered in the Kennel Clubs Any Other Variety listing in 1913. Being so undifferentiated from other rough-coated Terriers, they were not admitted to the UK Kennel Club until 1920, after first being rejected in 1914. The first breed standard for the Border Terrier was written by Jacob Robinson and John Dodd on behalf of their family.

The Border Terrier was not very popular for mounted hunts. It does not appear to be faring any better today, with even fewer workers found today. To say that the Border is not popular in the field does not mean that it has fallen out of favor in the show ring or in the pet trade. Border terriers are among the top ten breeds in the UK Kennel Club, and nearly 1,000 border terriers were registered with the American Kennel Club last year.