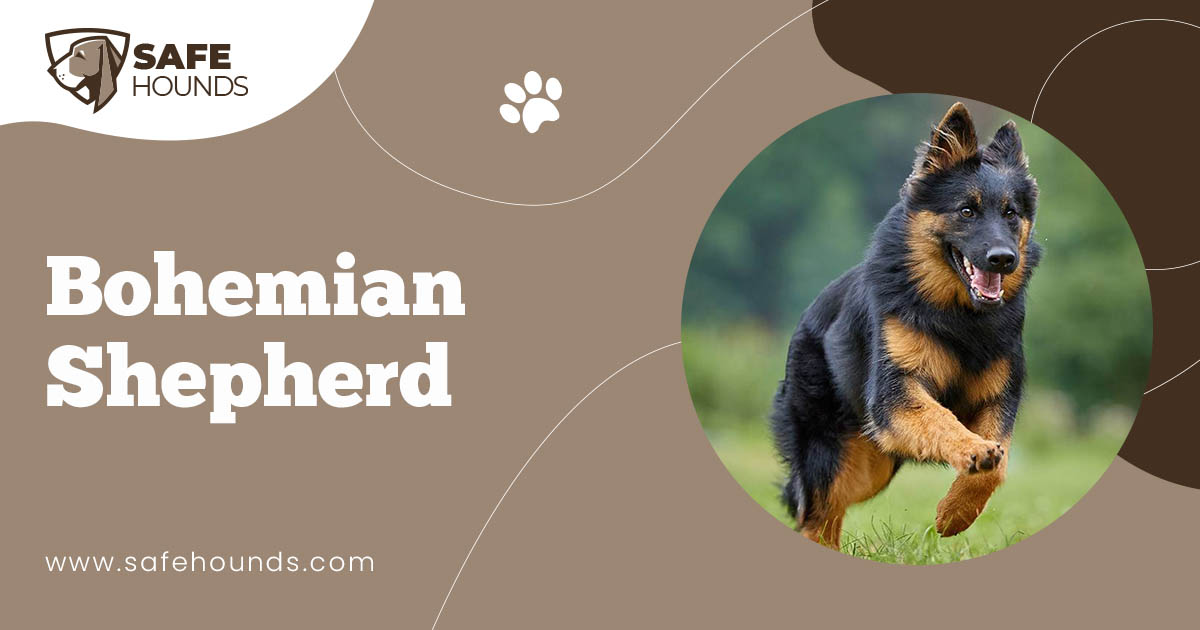 The Bohemian Shepherds existence dates back to the 13th century. These working dogs were originally bred by the Chodove people. Chodsky Pes is an alternative name given to this breed that was depicted in the works of art of Mikolas Ales, a famous painter. The dog was featured in the statue done by Cenek Vosmik of Jan Sladky Kozina, the legendary 17th century Czech leader. This breed of working dog that was mentioned in Psohlavci, a book written by Alois Jirasek has played an important role in the history of the Chodove people. These dogs have been the trustworthy companions of the Chods while guarding the southern Czech Republic borders.

The Bohemian shepherd is a medium sized dog with a slightly longer than tall body and a long thick double coat that is either black or tan in color. This breed has very similar looks with the German Shepherd. The German Shepherd is believed to have originated from this ancient breed. These dogs are not really ferocious but they are noted for their courage. The Bohemian Shepherd was originally used by the Chods in patrolling the border. Because of its well developed protective instinct, the dog has been utilized as guard and protection dogs throughout its history. The Bohemian Shepherd is an intelligent breed. This independent worker will not wait for the command of the master as it instinctively knows what must be done when herding the livestock. The Bohemian Shepherd is a versatile breed. In recent years, these dogs have excelled in search and rescue operations. Because of its agile nature, these dogs have excelled in agility competitions. These dogs are also used in recreational sledding. Quite a number of these dogs were trained to serve the handicapped. Bohemian Shepherds are excellent guide dogs for the deaf and the blind. Noted for its loyal and affectionate nature, the dog is a wonderful addition to the family as well.

The Bohemian Shepherd is a breed of working dog with an unhurried light and fluid movement. This medium sized dog is about 19 to 22 inches in height and weighs from 35 to 55 pounds. The dog has a sturdy, compact and well proportioned build that while giving the dog an elegant appearance also undeniably denotes strength, agility and endurance. The noble head is proportional to the size of the body. A Bohemian Shepherd has a flat skull that tapers slightly to the eyes. The stop is moderately defined. The head is tightly and smoothly covered with skin. The wedge shaped muzzle narrows to a medium sized black nose with well opened nostrils. This breed has dry well fitting lips, strong and long jaws and snow white evenly spaced teeth that meet in a scissor bite. Medium sized eyes are almond shaped and rather obliquely set. Dark brown in color, the eyes have a pleasant expression. Erect small triangular pointed ears are broad based. Ears are densely covered with the hair. The neck that blends smoothly into the withers is elegantly covered with long lush hair. Oval shaped chest is deep, reaching the level of the elbows. The rather short back is straight. The short smooth loin is in a straight line with the back. The long well furred tail usually hangs down whether the dog is at rest or on the move.

This breed has a tight fitting skin and a thick weatherproof double coat. The neck, the front and the sides of the chest and the rear sides of the forearms and thighs are covered with long upstanding hair. The undercoat is soft and dense. The long coat usually comes in two colors – black and tan. Bohemian Shepherd puppies though would not show their true coat colors until they are about 6 or 7 months of age.

The Bohemian shepherd is an exceptionally gifted breed. The dog is energetic, intelligent, fast learner and noted for its even temperament that makes it a suitable home companion and guide dog for the handicapped. This is not an aggressive breed. The dog does not have a nervous and unstable behavior. The dog in fact has an outgoing nature that makes it an excellent playmate of the children. A Bohemian Shepherd tolerates other dogs and smaller pets. It is a friendly breed however, the friendly nature of the dog is not extended to strangers. This breed makes excellent watch dogs because of its alert, vigilant and protective nature. Socialization and obedience training is necessary. Because of its obedient nature, the dog would be easy to train more so if the owner has established its position as the leader of the pack and has gained the trust and the respect of the dog. The Bohemian Shepherd can adapt well to living indoors or outdoors as long as the dog is provided with its large exercise requirements. This is a people oriented dog. The dog needs constant interaction with its people to be happy.

A Bohemian Shepherd has a thick beautiful coat. The dog may not need professional grooming but the coat would certainly require daily brushing to prevent the formation of tangles. Regular grooming would not only maintain the beautiful appearance of the coat but it will also promote the health of the skin. The dog sheds in the summer. During the shedding period, the dog would need more frequent grooming to accelerate the shedding process.

The Chodove are people that inhabited the Chodsko region in the southern part of Bohemia. These are free Czech speaking people that were displaced from their Polish region homes to guard the southern borders of the Czech Republic. Being direct servants of the king, the Chods were given special privileges that set them apart from other inhabitants. In 1935, John Luxembourg, the King of Bohemia has granted the Chods the right to use the southern Bohemia woods for the service they render of guarding the southern borders. For hundreds of years, the Chods have guarded the borders between Bohemia and Bavaria with their weapons and with the very strong dogs they call Chodenhunde.

The Bohemian Shepherd is a breed of herding dog that has existed in the Czech Republic as far back as the 14th century. Although it was believed that these dogs have existed much earlier and that they were professionally bred years before, no documentation has supported this theory. These dogs have been guarding the border and the homes of the Chodove people. These strong dog have been the constant companions of the people as apart fro patrolling duties the dog were also utilized to herd, to drove and to protect the cattle from predators. Ownership of a Chodsky pes is a tradition for the Chod people. Alois Jirasek has written about the valiant participation of these dogs in uprising of the Chodove people. In fact dog symbols were printed on the flags of the revolt. The same symbols are now used in the Czech young scout badges.

The Bohemian Shepherd is an ancient breed of sheepdog. Historians and dog experts believe that the German Shepherd has originated from this breed. This breed has existed since the 1300s but professional breeding was only started in the 1500s. Before the Second World War, tbis breed is enjpying a stable popularity. However, after the war years breed population steadily declined. In the middle part of the 20th century a group of breed enthusiast headed by Dr. Ing, Dr. Vilem Kurz and Frantisek Horac started a modern breeding program in Czech Republic. An article about the Chodsky pes was written by Jan Findejs and published in the magazine Pes pritel clovek. A call was made for dogs that would fit the image and description of the original Chodsky pes. The dogs that were found became the foundation stock for the restoration of the breed. On January 14, 1984, the Bohemian Shepherd was recognized as national race by CMKU. The breeding program in the Na Barance breeding station produced the first litter of six puppies on October 10, 1985. On November 27, 1991, the club pratel choskeho psa (Friends of Chodenhunde Club) was formed. The Bohemian Shepherd is an outstanding working breed of working dog that possesses a great drive to work. The dog makes a great watchdog and a loyal home companion. Because of the breeds admirable qualities, many dogs have found homes outside its country of origin. Bohemian Shepherds were imported by Poland, Denmark, Slovack Republic, France, Switzerland, Germany and USA. The breed is as yet unrecognized by FCI but preparations are underway for the recognition of the breed.