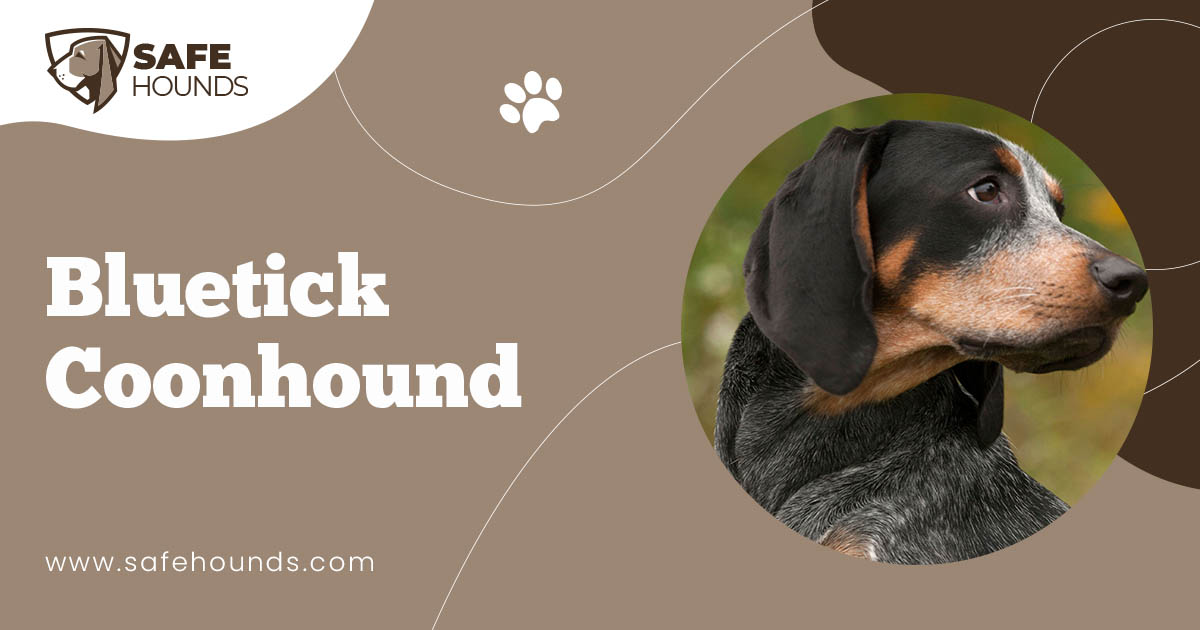 Did you know that Bluetick Coonhound is the state dog of Tennessee? Smokey, a Bluetick Coonhound was honored by University of Tennessee to be their official athletic mascot. This is how this breed is loved by people. Although primarily hunters, these dogs make good pets as they love people and people love them. They are an affectionate breed, very gentle and loving especially with kids. They have an expressive face that would communicate their desire to be petted. If you own on of these loving dogs, expect to have them always at your side. This does not mean that the dog is demanding. Although known to be very energetic this dog would be content to lie down beside your feet and receive loving pats. These dogs are sensitive and through their body language, you will know that they are unhappy and miserable.

Bluetick Coonhounds make good watchdogs. They will create a ruckus with their distinctive uncontrollable bark if the home is being intruded by strangers. Being people lovers, barking is the only thing this dog can do about intruders as unlike other breeds of watchdogs, Bluetick Coonhound very rarely bite.

Bluetick Coonhounds are strikingly beautiful because of its unique tri-colored bluish coat. The muscular body is thickly covered with black and white mottling that gives it a bluish or navy blue color. The mottling is interspersed with variedly shaped black spots on the ears, back and sides of the dogs body. The dog has a black mask that is not unlike the face of the raccoon he chases. Tan dots on the checks and over the eyes as well as the glossiness of the coat add distinction to the dogs appearance. Even though the clear keen eyes have a pleading look, it can never be mistaken that the dog does not have an alert and highly intelligent personality.

Bleu de Gascone as the scent hound is also called is a passionate hunter. Because of the dogs excellent sense of smell they have the ability to track old and cold scents. These dogs also have exceptional eyesight that enables them to efficiently hunt at night.

Blueticks have very distinctive voice. The bark of a Bluetick Coonhound that is described as bugle is distinctive and often recognized by the owner. They are considered to be free tonguers as the dog will continuously bark while on the chase. The bark also changes depending on the dogs activity. The owner need not see what his dog is up to as the bark would change if he has found a trail, when he is chasing the prey or when the dog is treeing. You can hear a medium bawl or bugle when the dog strikes a trail, a steady chop when the dog is running and a continuous coarse chop when treeing.

The unique coat and the well muscled build of the Bluetick Coonhound gave the dog its astounding appearance. The speckled blue effect on the coat is actually created by the measles-like black spots on a white or light colored background. The short thick coat is a bit rough to the touch but appears smooth and glossy. Bluetick Coonhound has the elongated head typical to hounds. Both head and the pendant ears are predominantly black.

The dog has a slightly domed skull and a prominent stop. The square muzzle is well proportioned to the width of the head. The dog has strong jaws and the teeth meet in a scissors bite. The thin ears that tapers to a point almost reaches the tip of the nose. Although pretty long the ears would not hang backwards as they are set low on the head. Coonhounds have rather large deep brown eyes.

A mature Bluetick Coonhound stands 21 to 27 inches tall and weighs 45 to 80 pounds. The dog has a well proportioned body. The muscular shoulders gradually sloped down giving the appearance of strength. Although the chest is slightly narrow, ample space is provided for the lungs because of the chests considerable depth. Thickly coated, moderately long tail is attached a bit below the backline. When the dog is on the move the tail is carried high forming a half moon curve.

Bluetick Coonhounds, first and foremost are hunting hounds with well developed sense of smell and exceptionally good eyesight that makes them proficient night hunters. The dogs are considered to have superior ability to pick up even a cold trail and to persistently tree an animal until the hunter arrives. A Bluetick Coonhound is a passionate hunter, one that can track and trail all night over difficult and rugged terrain even in a less than ideal weather. These dogs are highly intelligent as in spite of the miles of unfamiliar grounds they have traversed to track and trail they can still return to the place where the hunt began. Surprisingly, these dogs that excel in night trials to track, trail and tree a raccoon also make wonderful house pets. These gentle giants are people oriented and very affectionate with children.

Bluetick Coonhounds however, are not suited for an apartment life. These dogs are born hunters and while they can be inactive indoors they tend to follow their noses. Even a house with a pocket size yard would still be inadequate for this dog that was originally bred to run after small furry animals. If they pick up a scent they will scamper, fence or no fence to follow the trail and tree the furry object. This is why these dogs need to be socialized while still young if they will be made to live with other smaller pets. Apart from this, they are known as free tonguers. By nature, these coonhounds are trained to give a call when they find a scent. And what call that would be! The sound would reverberate thorough the forest. Imagine how that will sound in a residential area. Their bugle voices would certainly annoy neighboring.

These dogs would need a fair amount of vigorous exercise and a home with a fenced in yard would be most suitable. These dogs however can be extremely intelligent and cunning so much so that they learn to open gates to escape. Unexercised dogs are bored dogs that can damage the home and re-do the landscape. It is advised to keep the dog leashed if exercised in a public area as being hunters by nature they may can be very destructive to other smaller animals.

A Bluetick Coonhound will live up to 12 years as basically this breed does not have a lot of major health issues. Although prone to slobbering fussy grooming is not really necessary. The coat may be brushed weekly to remove loose hair and to maintain its glossy appearance. Ears however, must be given more attention. Ears must be regularly checked and cleaned to prevent the risk of infection.

There is actually no certainty as to where the Bluetick Coonhound originated. Although because of the dogs blue coloring it was believed that the dog descended from the interbreeding of the French Blue Gascon hound and the foxhounds of England that were principally located in the Louisiana area at that time. The Gascon, Porcelaine, Saintongeois and other French hounds were believed to have been brought to America way before the colonial times. The French hounds that were noted to being cold nosed were used to hunt big game. Five of the same French hounds were given to George Washington by General Lafayette.

During the early 20th century breeding of these highly intelligent and astoundingly beautifully voiced hounds were continued in this southern part of the United States. Dog traders who frequent the Louisiana bayou and the Ozark Mountains get the credit for developing the breed as they produce a remarkable type of hound that is characterized by its blue ticked color. These hounds that were then referred to as the French Staghounds and Blue Gascons were cross bred with a variety of curs and foxhounds. This became the ancestors of the Bluetick Coonhound.

At that time, Bluetick Coonhound together with dogs of different types were registered as English Coonhounds. Several of these blue dogs became famous. The Missouri Valley Echo, the Grants King Bo and the Baileys Blue Dollar are only some of the strain that gained prominence and recognition. Selective and careful breeding of English Coonhound, French hound, Curs and Foxhounds resulted to Bluetick Coonhound. Breeders of this dogs feared that a faster and more hot- nosed strain can develop. As they want to preserve their old way of hunting, the broke away and in 1945 a breed known as Bluetick Coonhound was established. The Bluetick Coonhound breed was officially recognized by the United Kennel Club as distinct and separate breed with specific standards.

Bluetick Coonhounds are highly intelligent and energetic dogs that were originally used as hunting dogs. Their tenacity at treeing the small furry animals is commendable. Presently, these dogs are loved as house pets. They can be very affectionate and loyal to the human family.