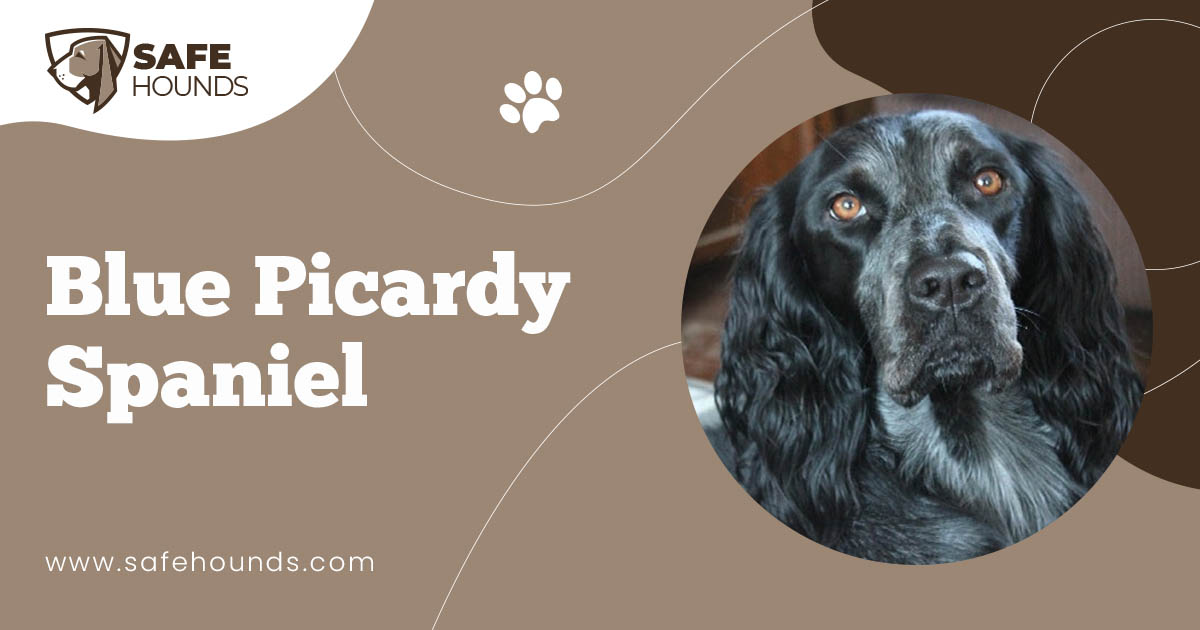 This breed that also answers to the name Epagneul Bleu de Picardie is a relatively unknown breed in other parts of the world although for years this breed has gained acceptance from French and English hunters. This is a tenacious and tireless hunter, one that will hunt feathered and furred game on land and on water. The well muscled and strong boned body gives the impression of power, health and vitality. These are water dogs. The webbed toes aid the dog in retrieving game from the water. When it comes to hunting this breed is noted to have a one track mind. Nothing can distract the dog from its purpose of getting the prey.

The Blue Picardy Spaniel is an intelligent breed that would always want to please the master. With the dogs outstanding hunting abilities a hunter could not ask for a more suitable hunting companion. A Blue Picardy Spaniel has a well balanced temperament. This is a calm and affectionate breed. This breed is an outstanding hunter but it is also gaining recognition as a wonderful home companion. Being biddable and having an inherent desire to please the master, this breed is a most suitable choice for first time dog owners. Of course the dog would show some quirky attitude like filching food from the kitchen counter, having an accident inside the house and deciding to rearrange the garden. But all these are part and parcel of owning a dog. This is why obedience training and socialization is necessary. Training the dog will not be a problem at all given that they are naturally intelligent and obedient.

What differentiates the Blue Picardy Spaniel from other French Spaniels is the distinctive grey black speckled coat that gives a bluish effect. This breed also has blue skin pigmentation. The dog has an athletic build but the distinctive medium length hair gives it an elegant appearance. A Blue Picardy Spaniel has large dark eyes that have a calm expression. The long broad muzzle appears to be square shaped because of the wide pendulous lips. The broad nose has well opened nostrils. Ears that are set above the eye level are quite thick and attractively frame the head as it is covered with silky wavy hair. The ears are long reaching the tip of the muzzle.

This breed has a rather short but well sustained back. The chest is of medium depth. Well sprung ribs descend to the level of the elbows. The forequarters as well as the hindquarters are well muscled. A Blue Picardy Spaniels tail does not extend beyond the hock and carried without a hook.

A Blue Picardy Spaniel is an alert tenacious and courageous hunting dog. Being a retriever, the dog loves to swim and enjoys having anything on its mouth be it a toy, a stick or a ball if a real bird or game is not available. This breed is all business while hunting but it turns into a calm affectionate pet in the company of the human family. This breed enjoys being with the children. A Blue Picardy Spaniel is known to be a tolerant playmate, would never show aggressiveness even with strangers. The dog would bark to warn the owners of an approaching intruder but that will be all, the dog may even wag its tail to welcome a stranger. This breed tolerates other dogs and smaller pets but socialization and obedience training will still be necessary so that the dog will learn the basic commands and would develop into a well rounded even tempered pet. Because this breed has an inherent desire to please, they learn quickly. And what was learned will never be forgotten by a Blue Picardy Spaniel.

Being a hunting dog this breed will require lots of exercise. This breed will do well in an apartment or in an urban dwelling. This is not a noisy breed. The dog would hanker for human companionship and as long as it is included in the activities of the family, as long as it is given enough attention there will be no irate neighbors. However, this dog would fare well in a farm or in a home in the rural areas where a decent sized yard is available for the dog to run off leash.

This breeds coat would not need extensive maintenance. However, the coat is the distinguishing feature of this breed. Regular brushing will ensure that the coat will maintain its admirable condition. A Blue Picardy Spaniel is a retriever, dogs that belong to this category are prone to ear infection. Regular ear cleaning must be included in the grooming routine of the dog.

The word spaniel was actually derived from the French word espaigne which means to drop to the ground. During the 14th century, a French spaniel and a net laden with weights are the most common hunting method used. As soon as the dog saw a hare or a group of partridges it would lie on its belly. It is a signal for the hunter to throw in the net to trap the dog and the birds inside. These setting dogs were dubbed as setter or spaniels.

France is a veritable source of waterfowl and other game. The country was considered to be a hunters paradise. Consequently several breeds of hunting dogs call France home. The Brittany, the French, the Pont Audemer as well as the Picard and the Blue Picardy Spaniels became indispensable hunters companions. As with other ancient breeds the history of French spaniels is cloudy. Documentation is rare and the little available information was given different interpretation. The spaniels were considered to be mixture of genes from indigenous dogs of the Middle East, Italy, Spain and the British Isles.

The first French Spaniel was speculated to have originated from the Middle East during the later part of the 11th century. During the Crusade, the French knights that travelled to the Holy Land were accompanied by their pointers and hunting hounds. Breeding between these dogs and the Arab Greyhounds is inevitable. The progeny became the first French spaniels. A description of these French setting dogs was made by Gaston Phebus and Henri de Ferriers during the 14th century.

In 1578, the common French people were prohibited from hunting. The hunting privilege was exclusively granted to the French nobility. This prohibition was abolished after the French Revolution. As a result, the commoners have raised their own sporting dogs. The French Spaniel was separated into several regional types. These hunting dogs were classified according to physical appearance and hunting abilities.

As mentioned, France is noted for being a rich hunting ground. The Picardie marshes as well as the Brittany moors became a favorite hunting destination of hunters from Great Britain. Crossing the English Channel to hunt in France became a fad during the later part of the 19th century. However, when a British quarantine prohibited the re-entry of dogs to Great Britain, the British hunters were forced to board their setters in Picardie farms. This resulted to the crossbreeding of Picard Spaniels with Gordon Setters and Blue Belton English. The Blue Picardy Spaniel was born!