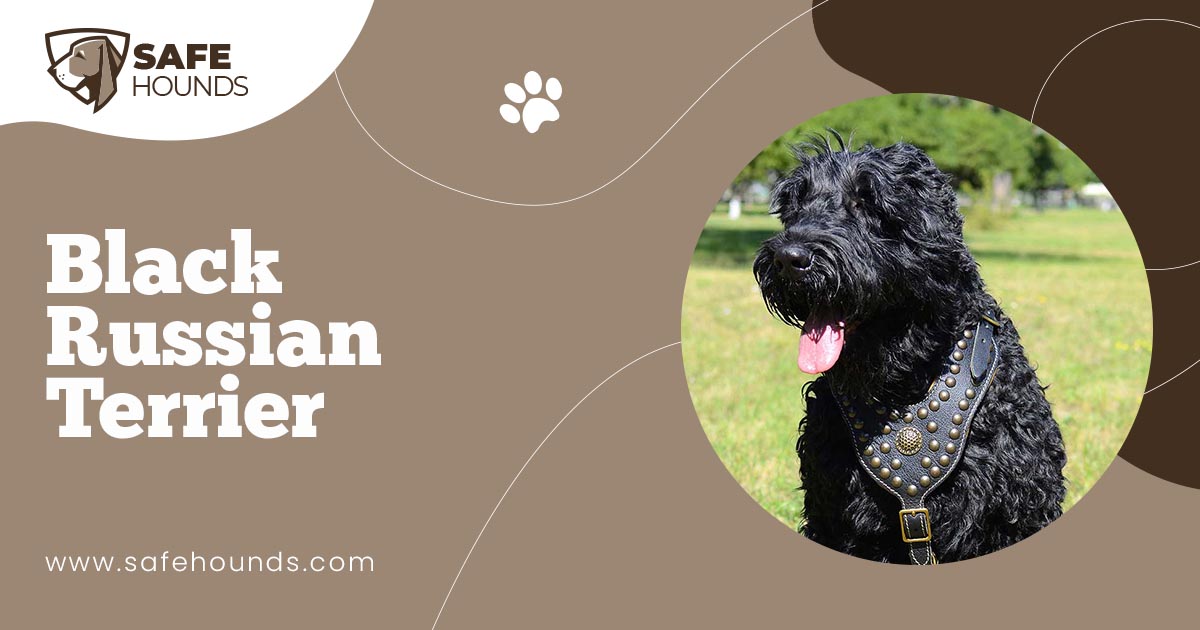 The Black Russian Terrier is a relatively new breed to the modern canine world. It was primarily introduced in Russia as a guard dog and a police dog. Its obvious strength, courage, athleticism, and resilience remain entirely unmatched, thus making it an excellent partner to security and police forces everywhere. It has a very rustic look, causing fear in anyone unlucky enough to attempt to be on the wrong end of the aggressive personality of this canine.

Little do they realize that the Black Russian Terrier is otherwise very friendly, sensitive, and desiring of companionship from humans and other dogs. However, they are very wary of strangers, and it takes a long time to warm up to an unfamiliar person or dog. For this reason, many people like to make pets out of Black Russian Terriers for the security they naturally exhibit.

The Black Russian Terrier is a mixed breed of many breeds of canine. It has a slight resemblance to each breed it is related to. It has a relatively surprising mix of the personalities of each breed too, which explains the sensitive personality, also combined with the naturally aggressive personality, which makes it an excellent guard dog.

The Black Russian Terrier is a very large, powerful dog. It is rustic in appearance (though not course). Males should be noticeably more masculine than females. The females will appear feminine but never lack in substance. They only come in one color: black. At times, a few gray hairs may be visible. The coat is hard and dense. It is never soft, wooly, frizzy, or silky. It should be between four and ten centimeters (1.4-4 inches) in length. It should form a type of beard appearance. An eyebrow type of structure is formed by the hair on the forehead, and a slight mane around the withers and neck is more pronounced in males. The coat is low-shedding.

The head is proportionate to the rest of the body. It has a moderately broad and blocky skull. The muzzle is slightly shorter than the back skull. The eyes are dark (brown or black) and medium in size. Eye rims are black. The eye is primarily oval shaped. The ears are set high, rather small, and triangular in shape. The front edge of the ear lies very close to the cheek. The length of the ear normally reaches the outside corner of the eye. The nose is very large and black. Lips are full, tight, and black. The gums have dark pigmentation. The teeth are large and white with a scissor-type bite.

The dog has large bone structure and well developed muscles due to the nature of its work. The male stands 25 to 29 inches at the withers while the female stands 25-28 inches with a tolerance of 1.3 inches or more if the dog is well proportioned. The dog can weigh anywhere from 80 to 143 pounds.

The Black Russian Terrier is confident, calm, highly intelligent, brave and loyal. It is also a very soft, gentle, friendly dog with people and other dogs it has bonded with. The Black Russian Terrier needs human companionship and has a very strong bond with its family. However, when it is around an alarming, strange object, person or dog, it gets very aggressive and protective. It will not hesitate to defend the people that it loves if it thinks they are threatened.

No matter how gentle the dog is, it will never be timid. They are wary of strangers and take a long time to warm up to unfamiliar people, thus making excellent guard dogs. Black Russian Terriers are naturally dominant and need confident owners who have experience handling similar dogs.\

Because of its breeding as a working dog, the Black Russian Terrier has a very strong work ethic, and needs a job to do in order to be happy. Early training is very important, as it will exploit any owner who has failed to establish clear dominance.

For the most part, the canine will eat any normal dog food. It is recommended that the dog have two small meals a day over one large one.

A Black Russian Terrier needs lots of exercise, and may become hyperactive and destructive if it doesnt have a chance to burn off its energy. The dog is primarily very healthy, with a lifespan of ten to fourteen years. However, it is prone to certain hereditary diseases including Hip Dysplasia, Elbow Dysplasia, and Progressive Retinal Atrophy, so regular checkups are fairly necessary.

The Black Russian Terrier was developed by the Red Star Kennel, owned by the former USSR (currently Russia and the surrounding area), for use as a military dog or a work dog. The dogs were commonly used by the military police at border crossings, prisons, and military installations for security.

The breeding stock consisted of several different breeds of canine, including the Airedale Terrier, Caucasian Ovcharka (also known as Caucasian Shepherd Dog, Caucasian Mountain Dog, Caucasian Sheepdog, and many more), Rottweiler, Newfoundland Schnauser, Giant Schnauzer, Standard Schnauzer and the now extinct Moscow Water Dog. Altogether, it took the interbreeding of seventeen breeds of canine to attain the Black Russian Terrier. The breed was perfected when they were able to attain quality Giant Schnauzer and Rottweiler stock from overseas. By 1956, they had a Black Russian Terrier that could breed true, with no more necessary development.

It was bred for its working ability, rather than for a stunning appearance. The canine has changed much over time. Early Black Russian Terrier dogs looked little like todays species, except in coat and build type.

The first breed standard was created by the Red Army in 1958, and was revised several times before 1981. By 1981, the Russian Ministry of Agriculture had recognized the breed. It was then recognized by the FCI (Fédération Cynologique Internationale, World Canine Federation in English, based in Belgium) in 1984.

The Black Russian Terrier had only been very widely recognized in recent years. As late as 2001, the American Kennel Club (or AKC) recognized it as a breed in the miscellaneous class, and in July of 2004, it was classified as a working class canine. As of late, it has been a popular dog for a pet, due to its protective nature, but still very soft, friendly personality with people and other dogs it has bonded with.