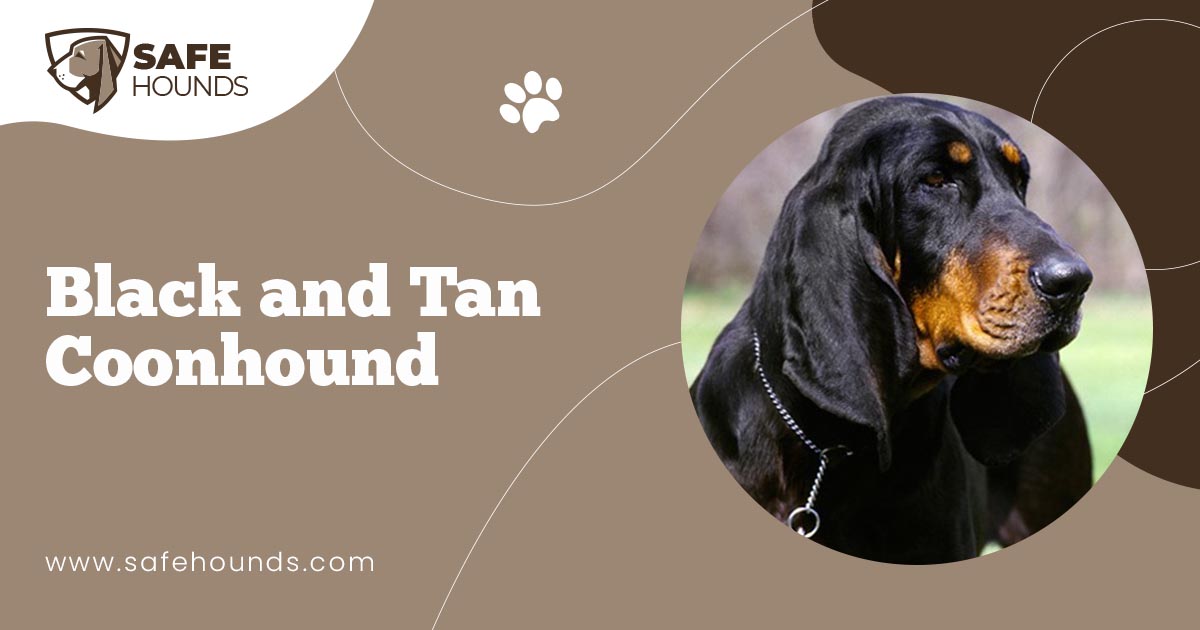 A Black and Tan Coonhound is a specific breed of Coonhound named for its obvious black and tan colored appearance. A Coonhound is a type of scent hound from the hound family of dogs, such as the Foxhound and the famous Bloodhound, widely credited as the main direct ancestors of the Black and Tan Coonhound. They are an American-style hunting dog specifically developed to the conditions of the United States. Due to the needs of hunting animals that run up trees to escape, the Coonhound has been primarily trained to catch raccoons, hence the name.

The Black and Tan Coonhound is also a great family dog. He loves people but may have a bit of trouble with other dogs especially if they startle him. They tend to be very loyal and friendly most of the time. Hunters, of course, love to have this dog along on every hunting trip, as they love to hunt and please their master. Even going as far as to hunt out large game such as bear or mountain lions, which are quite a bit larger than they are. Thus, the black and tan coonhound is very courageous.

The Black and Tan Coonhound has black and tan markings that are somewhat similar to that of the Doberman Pinscher and the Rottweiler. Normally the eyes are either hazel or brown, not quite round, and not deeply set. The head is primarily oval in shape. The ears slightly extend past the tip of the nose. The heads of the females are normally eight to nine inches in size from the back of the skull to the tip of the nose, while the heads of the males measure nine to ten inches.

Considering the nature to hunt, the Black and Tan Coonhound normally has excellent muscle tone and very strong bones. The neck is muscular, medium length, and slopes slightly. The back is very powerful and strong. The Black and Tan Coonhound has full, round, well-sprung ribs, eliminating flat sidedness you see in many canine species. The chest reaches to at least the elbows. The shoulders are very broad and muscular. The coat is short, but very full and dense to withstand the rough conditions and actions the dog goes through daily.

They have forelegs are perfectly straight, with straight elbows, turning neither in nor out. The Black and Tan Coonhound has strong and erect pasterns. Paws are small, with well-knuckled, arched toes and thick, strong pads on the bottom. The tail is strong. The base of the tail is slightly below the backline, and when in action sits approximately right angle to the back of the dog.

The size of the female Black and Tan Coonhound, as measured from the shoulder, should be 23 to 25 inches, whereas the male should be 25 to 27 inches. Males are heavier in bone and muscle tone than females. They have long tails, and a very distinct bark. They are normally anywhere from 65 to 100 pounds in weight.

The normal expression of the Black and Tan Coonhound is very alert, friendly, and eager. The confidence, strength, dedication, and courage of the canine are very well seen in its stride. It is very graceful, but long and strong. The movement of the legs seems almost effortless, but yet, the legs never cross, and there is little imperfection. From a rear view, the hocks follow an almost perfect line with the forelegs, with reasonable spacing. As speed increases, the legs tend to come toward the center, indicating the impeccable soundness, balance and speed the canine possesses. The head and tail ride proud and alert, while the body remains level. As proof of its confidence, strength, and courage, the Black and Tan Coonhound can even hunt large game, like mountain lions, bear, stag, and deer, even on dangerous terrain.

The Black and Tan Coonhound works very well with others of its species. Even with other Coonhounds, its demeanor remains friendly, outgoing, and surprisingly even in temperament. Some may seem reserved, but never overly vicious or overly shy. The only normal exception to this rule is that the canine may get aggressive when around strange dogs that alarms it. Rarely would there be any real aggression to be seen when not in a hunt. Conversely, when in a hunt, this canine is focused, aggressive, and undeterred.

The dog is very unhappy if left alone for long periods. Being a scent hound, it should be kept inside a fenced-in area to combat a tendency to roam. The dog needs a lot of space, like a farm or country environment where it can roam freely and stay active.

A proper diet should contain nutrient sources that are similar to those found in the native environment of the ancestors of the Black and Tan Coonhound and the proper balance of protein, carbohydrates, fatty acids, vitamins and minerals that match the breed specific nutritional requirements inherently passed down to the dog. A common recommendation is a mixture of meats from wild boar, turkey, deer, bear, other normal game the dog would hunt, and rice, which was a common cash crop in the areas the breed is from.

Not a lot of food is required. Overfeeding is not healthy for a Black and Tan Coonhound. The canine is prone to hip dysplasia. This condition can be fairly serious if not detected early.

Not a lot of grooming and physical care is normally required. However, regular ear care is important. The average life expectancy, if the dog has been cared for properly, is around ten to twelve years.

There are normally unconfirmed reports, still to be solidified, as to the origin of the Black and Tan Coonhound. However, some are proven, and some are just obvious. The ancestry can be traced back to the English Foxhound, and even further back, the Talbot Hound, originally found in England. However, speculation says they may not be native to England. Apparently, an older breed was imported during the Norman invasion in 1066. Some even trace the ancestry of the Coonhound family, of which the Black and Tan Coonhound is one, as far back as the St. Hubert Hounds of France.

It is obviously confirmed to be a cross between the Foxhound and Bloodhound, due to the black and tan coloration of the coat, the long ears, and most importantly, the stereotypical cold nose normal canines of this certain family habitually possess. Some reports, dug up from records and folklore, say crossbreeding a Foxhound an Irish Kerry Beagle will lead to the same result, but that has not yet been confirmed.

The Black and Tan Coonhound became one of only six varieties of the Coonhound family to be recognized as a hound by the American Kennel Club. Others that have been chosen by the AKC to share the same honor are the Redbone Coonhound, the Plott Hound, the Bluetick Coonhound, the English Coonhound, and the Treeing Walker Coonhound.