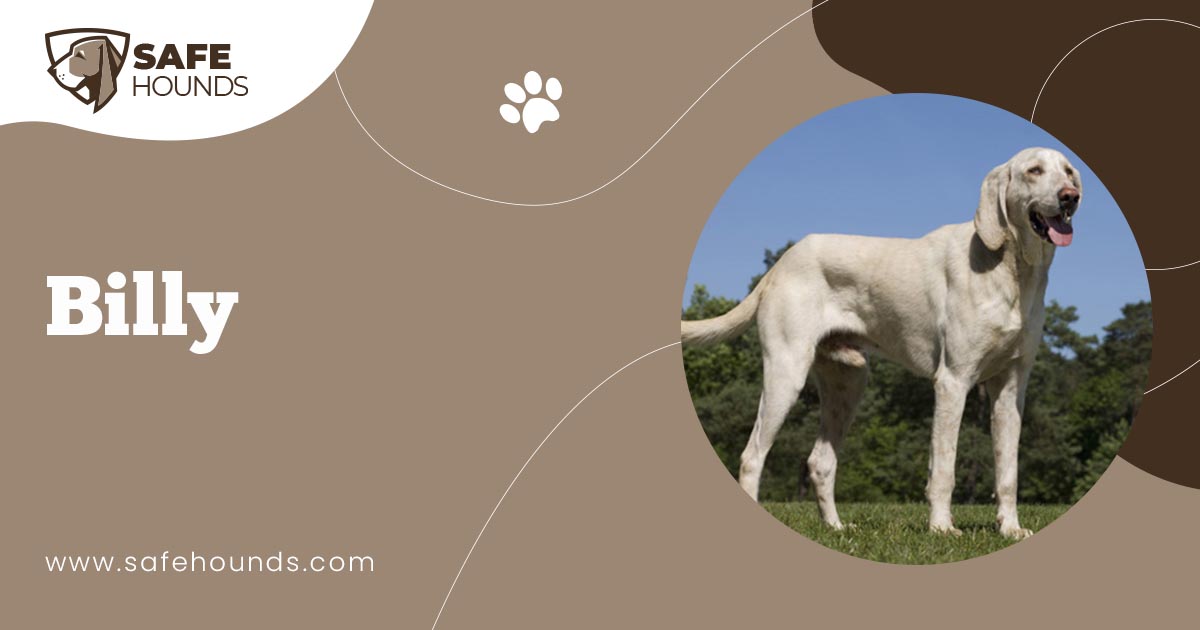 Billy, an elegant hound with a well constructed appearance hails from France. This dog was the product of careful inbreeding done during the 19th century in the Chateau de Billy in Poitou, a province of west central France. This breed was developed by Monsieur Gaston Hublot du Rivault using the Ceris, Montaimboeuf and the Larye. The Billys progenitors are pure French hounds making the Billy an aristocratic hound with no foxhound blood running in its veins. The Ceris is a small friendly dog basically white with orange spots on its coat. This dog is noted for its outstanding ability to hunt hares and wolves. Another ancestor of the Billy, the Montaimboeuf is a large dog, strong boned and very muscular, made strikingly beautiful by the off white hair with orange patches. Similar to the Ceris, the Montaimboeuf is also a great hunter though this breed has a quirky trait of not pursuing animals that would attack. The Larye, noted for it excellent scenting ability was also added to the Billys pool of genes. These three ancient breeds are now extinct. The Billy is their gift to the world of dog lovers. Monsieur Gaston Rivault has truly created an outstanding hound.

The Billy is also known as Chein de France-Comte. This is an intelligent and versatile dog that was primarily developed to be an excellent hunter. The dog has an elegant appearance that belies its capacity for great speed. This dog has an exceptionally good scenting ability. Intelligent and cunning, a Billy would know how to approach a prey. Its great baying voice that is quite harmonious to the ear would vary in tone according to the size and closeness of the game sighted. These qualities make the Billy a most valued hunting companion. These dogs are still considered to be very rare as they are seldom seen outside France, their homeland.

The Billy is a large breed of hound. Tall and lean but with well boned and well muscled body, a Billy have a noble and elegant demeanor. The dog has a medium length head, a slightly domed skull and well defined prominent stop. The muzzle appears to be rather square, the nasal bridge is broad and the nose that can be black or red brown in color is well developed. Dark eyes with dark eye rims are very open giving the dog an alert and watchful expression. Ears are typical to that of a hound but set on high so that it does not really droop. The medium sized ears are rather flat.

The dogs back is strong and quite wide. Wide loin is slightly arched, narrow chest is very deep and the ribs are flat. This breed possesses a strong long tail that can be feathered in some specimens. This breed is noted to be sensitive to extremely cold climate. This is due to the fact the coat do not serve as insulation being short and thin. The coat is harsh to the touch but it is glossy. The predominantly white or milk coffee white color have lemon or orange patches. This coat and the well constructed body make the Billy an outstanding and impressive looking specimen of mans best friend.

The Billy was primarily developed for hunting large and small game, for tracking and for hunting roe deer and wild boar. The dog is versatile as it has also excelled in obedience competitions. It has evolved into a wonderful home companion. With the human family these dog can be very gentle especially with children. These dogs are friendly even to strangers so dont expect your Billy to be a guard dog. Being highly intelligent, this breed will be easy to train although you have to make allowances for the dogs inherent scent hound behavior. These dogs are very independent and some would abandon an ongoing training when an interesting smell is found. Training however is a must as these dogs are known to be dominant and have a combative attitude towards other dogs. Although accustomed to hunting in packs, these dogs are prone to fighting other dogs when they are not hunting. Although this aggression appears to be reserved only for other dogs as the Billy is calm and well mannered with the human family.

These are highly energetic dogs that are built for speed. Apartment living is not suitable for this breed. An owner should at least replicate the vigorous activities the dog is used to. The dog can live in the city provided the home has an adequate well fenced area where the dog can run freely. The yard or the garden the dog can access should be secured with a fence not only for the protection of the dog but also for the protection of the neighbors pets. These are scent hounds and they have the tendency to run once an interesting smell is found. They also have the propensity to chase smaller animals and pets.

Bathe and shampoo the dog when necessary. Frequent bathing is not really recommended as it will remove the natural oils of the coat. However, dogs have the inclination to roll in mud and in anything that smells horrible. Bathing and shampooing will make your pet look better and smell better too.

These dogs would be most happy if they are allowed to live with other dogs outdoors. But because the coat is thin and short the dogs are sensitive to cold climate. A Billy is prone to contacting Bronchitis. Ensure that the dog is given adequate shelter if they will not be allowed indoors.

The name Billy was taken from the Chateau de Billy, the residence of Monsieur Gaston Hublot du Rivault, the creator of the breed. The breed actually originated in Poitou, a province in west central France during the 19th century. Three French hounds namely the Ceris, Montembeuf and the Larye were used by Mounsieur du Revault to create a hunting dog that would have excellent abilities to hunt the roe deer. As Monsieur Gaston had envisaged, the dog that resulted after carefully breeding the French hounds is one that is strong but with a lean appearance that enabled the dog to have the swift movement necessary to chase the deer. Moreover, the dog has the excellent scenting abilities of its progenitors that were now extinct.

The standard for the breed was established in 1886. The Billy gained popularity in France not only among hunters but also among pet lovers. The Billy was developed into a fine hunter known for its speed and endurance but it also has an outstanding appearance and mild temperament that makes the dog valued as a pet. Like any other breeds of dogs, the Billy too was affected by the two World Wars. The breed population decreased tremendously it almost got extinct. From the couple of specimens left, the breed was revived. It was believed that the Harrier and the Poitevin Hound was added to strengthen the gene pool of the Billy. The breed became a member of FCI although it is still seldom seen outside France.