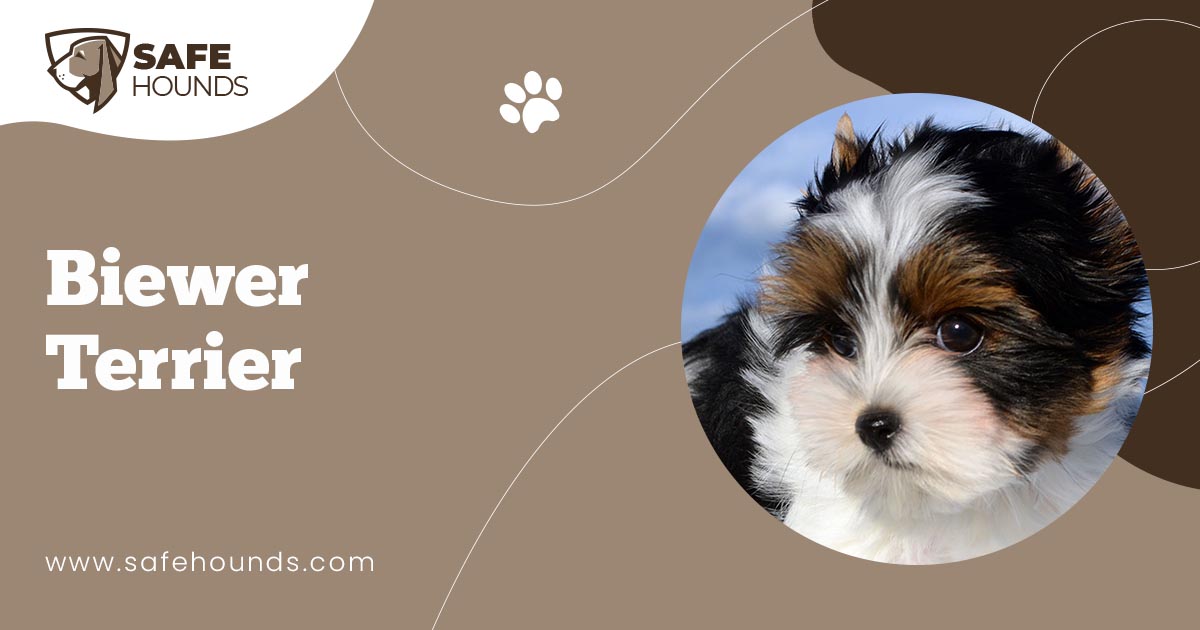 Who wouldnt be entranced by a lively and childlike tricolored dog with a long straight silky coat and a beribboned topknot that keeps the soft silky hair off the alert and inquisitive eyes? Keeping toy dogs have become a fad. These miniature dogs are often seen in the arms of celebrities or in posh pouch bags. These pampered dogs are customarily made to wear designer dog accessories. The Biewer Terrier is one of these endearing toy dogs. This breed of toy dog was developed in the early 1980 in Hunsruck, Germany by Gertrude and Weber Biewer. The Weiber Terrier also answers to the name Biewer Yorkie as it was developed from Yorkshire Terriers. The Yorkshire Terriers from where Schneefloecken von Friedheck was developed was speculated to have a recessive piebald gene. It is probable that an accidental mating between a Yorkshire Terrier and another breed of dog created the piebald gene although the color did not show up until the next generation.

The progenitors of the Biewer Terrier are Yorkshire Terriers with long shiny and straight finely textured hair that is steel blue colored on the body and bright golden colored on the head, chest and legs. A Biewer Terrier has a stunning tricolored coat. The chest, underbelly, legs and tail are white, the back is either blue or black and the face is covered with gold hair. Biewer Terrier ala Pom Pon is a mouthful name for such a small dog. However, the Wiebers have given dog lovers a big, big gift in a small package. The Weiber Terrier is a small dog with a big personality. This dog is loved not only for its good looks but more for its ideal temperament. Having this dog at home is comparable to having two medium sized dogs. This is a very energetic breed always willing to play with the children always following the master and always eager to please.

The tricolored long, silky hair is what gives the Biewer Terrier an elegant appearance. This breed also answers to the name Biewer ala Pom Pon, a name that means a dog likened to a colorful ball of yarn. The long hair is parted at the back and hangs down the side of the body as if carefully combed by a loving hand. The hair that is long enough to reach the ground is very straight, shiny and silky in texture. The blue black, white and tan colored hair on the head is usually put up in a topknot to keep the hair away from the dog. The face is commonly covered with gold fur. Hair on the back can be blue or black and white. Hair on the chest, on the stomach and on the legs is always white. The tip of the tail has white hair as well.

The Biewer Terrier has a slightly rounded head, a moderate stop and a muzzle that is about 1/3 of the heads length. This breed has a black nose. Medium sized eyes that are either almond shaped or round have an intelligent expression. Eye rims have dark pigmentation. This breeds teeth meet in a level or scissor bite. Small V shaped ears are well covered with hair but the tip must be shaved. Ears are widely set to the back of the skull with the base leveled with the eyes. The Biewer Terriers small body is well proportioned. The dog has a level back. Height at the shoulder is equal to the height at the rump. The dog has a slightly longer than tall body. The chest is deep reaching the level of the elbows. The dog has moderately sprung ribs. The strong short loin is slightly tucked up. The long hair that covers the tail forms a flowing plume. The tail is carried over the body in teacup handle fashion.

The Biewer Terrier is a fun loving and friendly dog. With its childlike attitude the dog would make a good companion and playmate of the children as it is always eager to play. The dog may be small in size but it has an adventurous nature. Unmindful of its size the dog would courageously face dogs several sizes bigger that its own size. This sweet little dog has a protective nature. The Biewer Terrier makes a good watch dog as it is distrustful of strangers and it has the propensity to bark. Small dogs would be easier to manage however, it would be best if this small dog is obedience trained. Obedience training will benefit not only the dog owners but the dog as well. Dogs, no matter what size would need to have a well ordered pack. This dog is intelligent but it also has a stubborn streak. The owner must be able to manifest the pack leader status otherwise the small dog would develop unacceptable behaviors. This breed would do well in an apartment or in a house without a yard. The exercise requirement of this dog is not very high. Because they are very playful the exercise requirement will be satisfied even if they are inside the house.

This playful breed makes a wonderful playmate of the children. However, because of the small size, the dog may be inadvertently hurt by very boisterous children. Young children must always be supervised when playing with the dog. The Biewer Terrier is a single coated breed. Single coated breeds generally do not require an extensive grooming routine. However, the hair of this terrier is long. This is one of the breeds that would need regular brushing and frequent bathing. The hair of the dog is similar to the hair of humans. The dog would benefit from being regularly shampooed but it is necessary to rinse the hair very well otherwise it can result to dry flaky skin.

Darling von Friedheck, the 1981 FCI World Champion in Dortmund and Fru-Fru von Friedheck, the 1981 FCI World Championess in Dortmund are the two Yorkshire Terriers that produce the beautiful piebald puppy from which the idea of producing more piebald puppies originated. Through selective breeding, the rare breed of toy dog that was later on given the name Biewer (pronounced Bee-vair) was produced.

The Biewer Terrier originated in Germany. This toy breed was developed by a husband and wife team who have been raising and showing Yorkshire Terriers for over two decades. On January 20, 1984, a white, blue and gold puppy was born from two Yorkshire Terriers champions owned by Gertrude and Werner Biewer. The puppy was named Schneefloecken von Friedheck (Snowflake). This puppy is the start of the very tiny breed of terriers that is noted for their whimsical childlike attitude. Selective breeding was continued for five years until a new breed was established. This breed that was initially given the name Biewer Yorkshire ala Pom Pon was registered with the ACH (Allgemeiner club der Hundefreunde Deutschland) in 1986. In 1989 a standard for the breed was signed. The breed standard is that of the Yorkshire Terrier but the coloring is white, blue and gold. Careful and selective breeding was continued to maintain the superior quality of the dogs produced. Due to the tightly reigned breeding program very few puppies were produced. This made the Biewer Terriers very costly apart from being hard to come by. Selective breeding was discontinued when Werner Biewer died in 1997. The breed was introduced to United States in 2003. Through the Biewer Terrier Club of America the development of the breed was continued. The Biewer Terrier was considered by some dog experts to be variant of the Yorkshire Terrier. The BTCA has made possible the extensive DNA testing to study the genetic makeup of the reed. The tests conducted on more than 100 dogs have verified the fact that the Biewer Terrier is indeed a distinct breed. The Biewer Terrier is not recognized by the American Kennel Club. The breed though was accepted as a rare breed by the American Rare Breed Association of America in December of 2007.