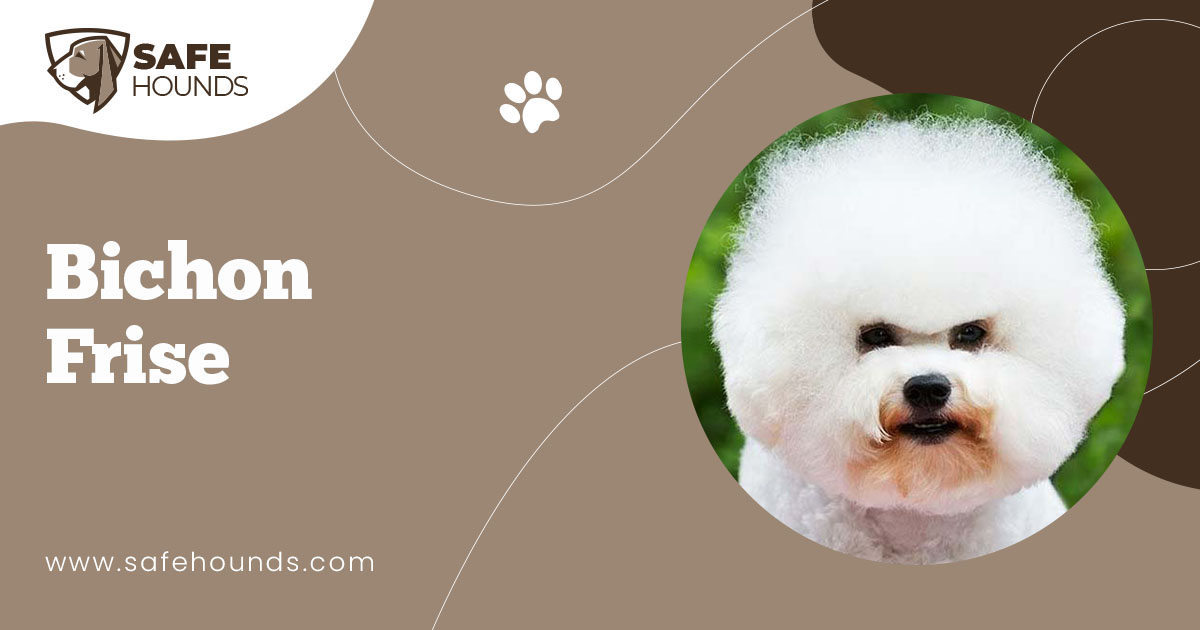 Bichon Frisé is a French term that literally means curly lap dog, in fact, this is the main characteristic of this small breed of dog of Mediterranean ancestry that was first introduced to Spain, Italy, and Belgium, then to France, and today is recognized as a French-Belgian breed by The International Canine Federation.

The oldest reference of this breed comes from the Barbet, a medium-sized French gun dog also known as the Water Spaniel. Barbets have always been a little known breed outside of France. Popular belief points to the Barbet as the origin breed of many other water dogs including the Bichon Frise, dog formerly classified as part of the BarBichon group.

Over time, Bichons evolved into four different breeds, Bichon Maltese, Bichon Bolognese, Bicho Havanese, and Bichon Tenerife, native to the Island of Tenerife in the Canary Islands and direct ancestor of the modern Bichon Frise.

Bichon Frisé is a dog, which size ranges from 9 to 12 inches in average, weighing between 7 to 12 pounds. Most dogs have a soft white coat but non-pure breads may show apricot, buff, or cream shadings commonly around their ears and fading after the first years of life and no graying of the muzzle when they are old.

These dogs have curly and silky hair, usually between 3 to 4 inches long and very loose that helps with fashionable trims. Their head is proportional to their body, although with a fairly flat skull with rounded, dark eyes, flat cheeks, black nose, and thin lips.

Another eye characteristic are the dark edges of eyelids and their pendulous, drop ears covered with fine, long curled hair, which are carried forward when the dog is alert. Bichons tail is raised without curling onto the back and curving gracefully.

The Bichon Frise has a muscular, broad body, which is slightly elongated, with a long neck and a well-developed chest and rounded croup. Muscular tone in Bichon Frisé dogs have overall exceptional quality, but mainly in their thighs and buttocks region.

When the fur and coat are groomed correctly, the dogs hair is velvety and its appearance resembles a small marshmallow teleported into a puff dog.

Bichon Frisé dogs are exuberant and have an inquisitive but soft expression, always alert of their surroundings, and showcasing a slightly pronounced stop with their neck raised high and usually proudly carried.

Bichons are sensitive, gentle-mannered, very adaptable, playful, stout, and very affectionate, exhibiting a merry, cheerful attitude, but at times they are very strong-willed.

These dogs are charming, very intelligent, and enjoy socializing with other dogs and people, although sometimes they can display a tenaciously unwilling attitude, but mostly they have a beautiful temperament resulting from their good temperament genes, although without the proper handling they may develop a shy, bitter, or aggressive temperament.

Bichons live from 11 to 16 years on an average, but with proper care, they may live several years more beyond this. The Bichon Frise is a dog that needs a firm training to make sure he will fully develop his charm, but he responds well to standard obedience commands if trained at home.

These dogs also require a great amount of human attention and continuous grooming, whether you do it yourself or have it done by a professional. They require almost daily brushing to keep their silky appearance.

Veterinary care is similar to the care provided to other breeds: immunizations and occasional worming if necessary. Feed a Bichon Frise is not hard or costly because his basic diet consists of commercial dry kibbles, although his food can be supplemented with canned dog food, table scraps, meat, cottage cheese, and fresh water that must be available all the time.

The Bichon Tenerife is a breed developed during the Renaissance crossing Maltese dogs with small Barbets, then introduced in the Canary Islands during the 14th century. BarBichons were introduced to mainland Europe through Italian and Spanish sailors who used them as barter to obtain provisions and other goods which were spread throughout Italy by the middle class of merchants.

Bichons were introduced to Belgium during the Spanish occupation of Flanders in 1573, and shortly after the Bichon Tenerife would become popular among nobility as a result of the French invasion to Italy.

The Bichon Tenerife was introduced to France under the reign of King François I in the 16th century, firstly as companions of the people who was taken to serve in the French courts.

After this time, King Henry III confirmed the popularity of the Bichons in France choosing one of these dogs as his favorite pet. Henry III used to pamper his Bichon, who was carried by the king in a tray basket, wearing expensive perfumes, and colorful ribbons attached to his neck.

This eccentric custom originated a French verb: Bichonner (to pamper, to make beautiful. The Bichons remained as fashionable pets during Frances Second Empire ruled by Napoleon III in the 19th century, but in the late 1800s the days of glory for Bichons came to an end.

After the turn of the century, the Bichon Tenerife was an impoverished street dog, which only was popular as a circus attraction or trained for doing tricks at itinerant fairs called fêtes foraines. After World War I, some visionaries rediscovered the Bichon Tenerife through the artwork of artists such as Sir Joshua Reynolds, Titian, and the Spanish painter Francisco Goya y Lucientes.

In 1933, the Societe Central Canine De France recognized the Bichon in France. One year later the President of the International Canine Federation proposed the name of Bichon Frisé instead of Bichon Tenerife or simply Bichon. After some decades, the dog was then classified as a French-Belgian breed in 1960.

Bichon Frisé was formerly recognized as a breed belonging to three countries: France, Belgium, and Italy, but in the mid-1950s a French couple who emigrated to Milwaukee, Wisconsin in the United States, introduced the Bichon Frise to America contributing with the worldwide popularity that today this breed holds.

In the 1970s, the Bichon Frise was eligible to enter the AKCs Miscellaneous Class, later admitted to registration in the American Kennel Club Stud Book, and finally to show in the Non-Sporting Group at AKC dog shows.