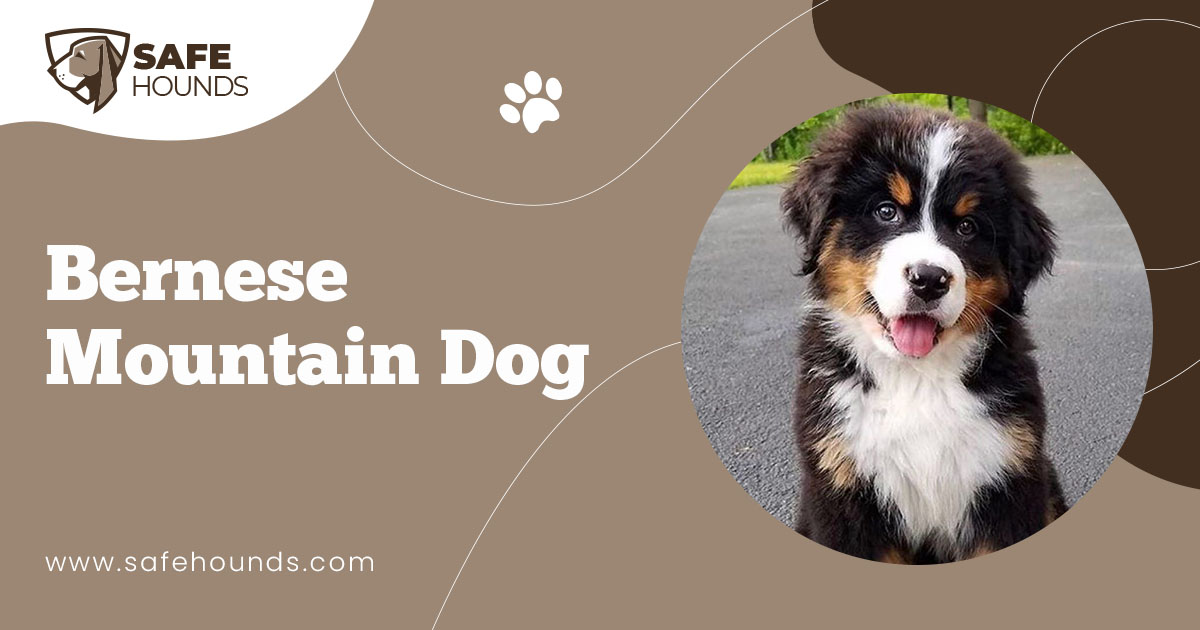 The Bernese mountain dog is a sturdy loyal breed. They love to run around and are friendly with everyone and everything. They are very social and are extremely loyal to their family. They always want to please their family, or usually just one member that he becomes closest with, and is always eager to do anything to make his family happy. To sum up the Bernese mountain dog, he is loveable, playful, and very social.

They are a sturdy heavy dog and make great family dogs and companions. They usually mature slowly and act like a playful puppy long after their puppy years have passed. The Bernese mountain dog is large but active and likes to have fun all day long, always socializing, romping, and playing. They should not be caged up or fenced away from the family, as they do not like to be alone.

The Bernese mountain dog is tri-colored and sturdy. They are large dogs with a balanced and sturdy posture. They usually prefer cool weather and hot weather may ruin their coats thick long texture. Males appear more masculine while the females appear distinctly dainty and feminine. They are a fun, loveable dog that get along well with almost everyone and are wonderful companions and pets.

The Bernese mountain dog is a sturdy, large, and heavyset dog. They are usually black in color with some white or rust colored streaking by the paws and eyes. They have a white undercoat made of fine long hair and their top coat is long and straight or in some cases, curly. It is also very thick and does not do well in warm climates.

Male Bernese mountain dogs are very masculine looking while the females are noticeably feminine and soft. Females range from 23 to 27 inches tall and weigh between 80 and 105 pounds. Males range from 24 to 28 inches and weigh between 85 and 110 pounds. They are both full bodied and sturdy looking. The Bernese mountain dog is slightly longer than he is tall and is heavyset with large bones. They have a long hairy tail that is always wagging with delight.

They have oval, deep set, dark brown eyes with close fitting eyelids. They have medium sized ears in the shape of a triangle, which hang down usually, but become pointed and erect in times when he is alert. The Bernese mountain dog has a black nose and long muzzle. They have tight looking lips that meet with a scissor-like bite of white sharp teeth. They have round paws and well-arched toes. They are sturdy, strong, and very muscular, especially in the hindquarters. Bernese mountain dogs should never become over-weight or lazy.

The Bernese mountain dog is a sweet, friendly, and gentle breed. They love to play and run around and need lots of space to get enough exercise. They are not well fit for apartments, as they need a large backyard to get lots of exercise and to run around in. They do not do well in warm climates and usually require a cool climate with a large backyard to be satisfied.

The Bernese mountain dog is loyal, self-confident, and very social always wanting to meet new people and play. They are never aggressive or shy and like to be the center of attention, always wanting to please their companions. They are intelligent, but tend to mature slowly, remaining a puppy at heart for years past the puppy stage in other dogs. They do well with children and other pets and are sweet fun-loving animals.

They need lots of exercise, as they are a large dog and may become lazy or obese if not properly exercised. They should have a larger yard to run around in and should get a lot of playtime and attention. They require a cool climate and do not do well being locked up or outdoors all of the time. The average life span of the Bernese mountain dog is between 6 to 8 years.

The Bernese mountain dog is said to originate from Switzerland, but no one knows for sure. It is said that they developed in the hills of the Swiss mountains and are great mountain and farm dogs. He is said to be one of four native breeds to this land and is in the group classified as Sennenhunds. The other three breeds are the Appenzell Cattle Dog, the Entlebuch Cattle Dog, and the greater Swiss mountain dog. At this time, the A.K.C only recognizes the Greater Swiss Mountain Dog and the Bernese mountain dog.

The Bernese mountain dog has helped the army throughout history. While the Bernese Mountain was working in with the army, he had two main jobs, which included guardian of the troops at night and herding the animals that came along as a food supply. It is also said that they were used by farmers, aiding in herding, guarding, watchdogging, and pulling tools the farmers needed out in the fields.

In the 1860s, the Bernese mountain dog became very popular throughout the Swiss mountains. When the Industrial revolution happened, new stronger machines were created which made the need for the Bernese mountain dog less and less. Farmers were using machines to haul their tools to the fields instead of their faithful friends. They became almost extinct until Dr. Albert Heim recognized them again and helped to regain their popularity. In 1968, they were brought to The United States and were accepted in the Bernese Mountain Dog Club of America the same year. In 1995, it was granted full status with the A.K.C. in the Working Group. They are still used today for help in farming, and still make wonderful companions and family pets.