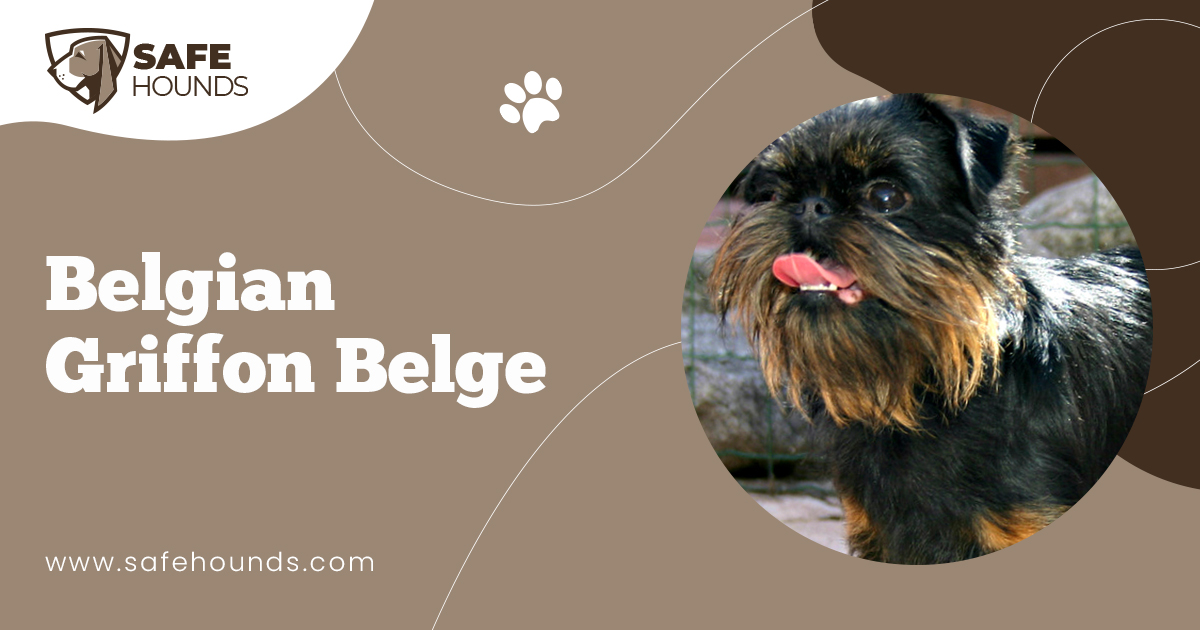 Griffon Belge is one of the three breeds of toy dogs that originated from the city of Brussels, Belgium. For such a small dog, the Griffon Belge has gained worldwide acclaim when the dog was featured in the movie As Good As It Gets. This adorable toy dog was also featured in other movies but what is most notable is the fact this breed has served as the inspiration for George Lucas when he created Ewok, the fictional character in the movie Star Wars. A Ewok has a body that resembles a teddy bear and a head that is very similar to the distinctive head of a griffon Belge. The Griffon Belge, Griffon Bruxellois and the Griffon Petit Brabancon are collectively known as Brussels Griffon. These dogs are recognized as distinct and different breeds by FCI although some kennel clubs consider the three types to belong to the same breed. These three types of toy dogs have very similar appearance except for the type and color of the coat.

The Griffon Belge was once an excellent ratter. Centuries ago, ancestors of this breed was kept by Hansom cab drivers to rid the stables of rodents. However, even during those times, the dog is already an outstanding companion. Presently, this breed still manifests its inherent ratting ability whenever given the chance but the dog is mostly kept as a home companion. This little toy dog has a giant personality. Highly intelligent, the Griffon Belge is capable of performing any task that its small size will allow. This breed has a strong well constructed body that allows the dog to participate and excel in agility trials and obedience competitions. This versatile breed has proven its worth in warming the hearts of ailing and aged people as therapy dogs. But most of all, the Girffon Belge has evolved into a pampered pet that is allowed to share the bed of the master. This toy dog gets extremely attached to its family and even though it is a fairly active breed, it would love to be spoiled. The dog would be content to lounge on the masters lap, to be an indolent couch potato as long as the beloved master is around.

The three breeds of Brussels Griffon are noted for its flat face that has an almost human expression. The Griffon Belge similar to the Griffon Bruxellois and the Griffon Petit Brabancon has a thickset, sturdy and well balanced square shaped body. In spite of being a toy breed, one that is often carried by elegantly dressed ladies or paraded wearing fancy collars, this breed has a muscular and well boned body. Far from being delicate, a Griffon Belges robust and well constructed body exudes strength and vitality. The Griffon Belge may be diminutive in size but it does have medium length slightly arched neck, a short but strong level back, a broad deep chest with well sprung ribs as well as good boned limbs. For such a small dog, A Griffon Belge has an average weight of 8 to 10 pounds. The Griffon Belges large rounded head should be proportionate to the body but should not be too large to unbalance the dog. This breed has a rounded forehead that should not bulge. Ears are set high and well apart. European countries prohibit ear cropping. In such a case the ears are carried semi erect. The eyes give the dog its human like appearance. Large dark eyes are wide set and rimmed with black eyelids. These expressive eyes may be prominent but should not bulge. Broad black nose with wide nostrils is set level with the eyes and angles upwards. Stop is well pronounced. The very short muzzle between the forehead and the nose should not be longer than 1.5 cm. This dog has black close fitting lips. Upper lip does not overlap the bottom lip and does not form flews. Longer hair on the face forms a beard and moustache. Longer hair above the eyes forms bushy eyebrows.

The Griffon Belge is a loving breed that loves to be spoiled. This is an affectionate people dog. The dog dishes out lots of affection. This breed would choose one human and once it has chosen you, be assured that you well have a protector and a loving companion, one that would demand to be constantly on your side. A Griffon Belge is the ultimate lap dog. Because of its possessive nature, the dog would be your shadow wherever you go. It would jump into your car, snuggle in your lap when you watch TV and would even want to share your bed if permitted to do so. This is why the dog is not for everyone. Because of the possessive nature, a Griffon Belge would not be a good choice for a family with very small children. This breed would tolerate older children. The dog would do well with other dogs in the household if it is well socialized.

This breed may be small but they are totally fearless. A Griffon Belge that has the Small Dog Syndrome can be a problem. The dog would believe that he is the alpha male and would be very hard to control. This is why socialization and obedience training is very necessary for this breed. A Griffon Belge is intelligent. They can easily learn tricks but they are also known to be willful and stubborn. This breed would do well in an apartment. These dogs are active indoors and would not really need a yard to exercise. However, the dog would still need to be taken on long walks. Be aware though that this is a brachyocephalic breed. Your pet may have breathing problems and very strenuous exercises could be harmful for the dog. This breed is also prone to heat stroke. It is advisable to walk the dog during the early morning or early evenings when the temperature is cooler.

Griffon Belge that are kept as pets may be trimmed or clipped. One that is shown would require an extensive grooming routine. Of course the coat would need to be brushed regularly but wire coated dogs would need to be stripped every three months or so to keep the coat from being soft and looking wooly. Stripping is done by using the hands or a stripping knife to remove dead hair and ready to fall off hair that got tangled with the living hair. When the dead hair is stripped the dog will grow a new coat. Unlike other dogs, this breed can be bathed every week. Eye care should be included in the grooming routine. A Griffon Belges eyes bulge slightly and they are prone to lacerations and infections. The eyes as well as the ears must be regularly checked.

The Griffon Belge is one of the three types of Brussels Griffon. The other are the smooth coated Petit Griffon Brabancon and the other wire coated breed known as the Griffon Bruxellois. These three breeds that have originated from Brussels, Belgium are speculated to have descended from the rough coated dogs called Smousje. This terrier like dog was kept by coachmen in stables to eliminate vermin. These alert little dogs became the pets of the Hansom cab drivers. The dogs were affectionately called Griffon d Ecurie which means wiry coated stable dogs. In early 1800s, these smart little dogs were crossed with imported toy dogs. The current breed type possesses the genes of the King Charles Spaniels and the Pug. From the Pug, the Griffon Belge had inherited the unique shape of the head as well as the monkey like face.

Being a handsome dog with an engaging and lively personality, the Griffon Belge caught the interest of dog lovers. The breeds popularity grew when Queen Marie Henriette, the Archduchess of Austria has taken to breeding Brussels Griffon. The breed gained international fame and became the favorites of royalty. However, the two World Wars almost caused the extinction of this wonderful breed. Breed numbers were tremendously decreased. It was even though that no Brussels Griffon were left in Belgium. The breed survived through the dedicated efforts of breeders in other countries specifically English breeders. The breed is no longer on the brink of extinction. It has existed for years but it has never regained its lost popularity. Until the dog was featured in the American movie As Good As It Gets. The breeds popularity skyrocketed. Interest was revived not only for the Griffon Belge but also for other toy dog breeds.