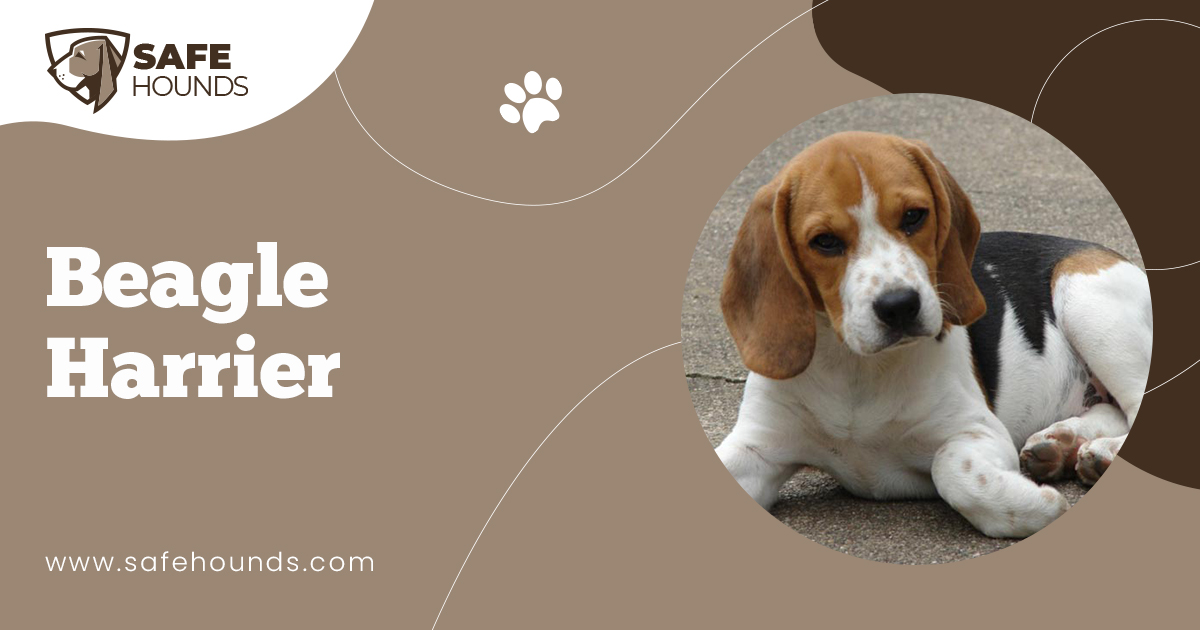 A rather stocky medium sized dog with a beautiful tricolored coat and long pendant ears is being walked by the owner. A passing jogger commented, What a beautiful Beagle! The companion commented No, its a young Harrier. The dog owner smiled because both joggers are wrong. The dog is actually a full grown Beagle Harrier.

Both the Beagle and the Harrier have well developed scenting abilities. These dogs are known to be excellent hunters of hares, rabbits and other game. These traits were inherited by the Beagle Harrier. The dog may have a small body but it is strongly boned and well muscled. It has inherited the agility, the strong determination and most importantly the outstanding scenting abilities of both the Harrier and the Beagle. There is no doubt that Baron Gerard Grandin got what he was aiming for when he created the breed.

A Beagle Harrier is a medium sized dog. A mature dog stands from 18 to 20 inches and weighs from 42 to 46 pounds. The dog may be small but it is well muscled and considerably big boned. With the stocky appearance and the strong bones, it is very evident that this is an agile and vigorous breed.

The dog has a strong head, the skull is broad though the stop is not very prominent. The muzzle that is equal to the length of the skull tapers to a well developed black nose. The dog is known for its lively and at times comic temperament. When the dog looks at you with its well opened dark eyes, you will know at once that it is an intelligent and cheerful dog. Broad ears with rounded tips hang down close to the sides of the dogs head.

The back is short but well supported and muscled, the chest is deep, ribs are well sprung, and the belly is filled out. This gives the dog a compact body. A Beagle Harriers hair is thick and lies flat against the body. The coat is short and smooth. The predominant colors are fawn, black and white. Black blankets are most common as well as tan markings. Some specimens have grey tricolored coats.

As mentioned, a Beagle Harrier possesses the agility, the speed and the excellent scenting ability of the Beagle and the Harrier, its progenitors. Because the outstanding abilities of these two breeds were inherited by the Beagle Harrier, one can surmise that this breed is a much better hunter. These dogs are still seen in France hunting in packs. Because these dogs are vivacious, highly intelligent and basically possess a good temperament, they are most suited to be good home companions.

These dogs form a strong bond with the human family, generally good with children and other pets. Used to hunting in packs these dogs would prefer to be in the company of other dogs. These are very affable dogs, nevertheless, socialization and obedience training must be commenced at an early age as the dog is a scenthound. This breed can be very challenging to train as most would turn a deaf ear and resist the training. An untrained Beagle Harrier would surely be a problem to recall once it has found an interesting scent. Many accidents befall to pets because they are not trained to follow the masters commands. Training should be done in a gentle manner. The dog is highly intelligent and a quick learner. The challenge would be on how to entice the dog to follow the commands. Incorporating games and treats with the training and making every session short would build the interest of the dog for the training.

A Beagle Harrier would show tremendous vigor and agility while hunting but the dog is relaxed and calm at home. The dog is relatively inactive indoors and being a scenthound it would need to be taken on long walks to provide for the needed exercise of the dog. Being used to working the field, owners must at least replicate the extensive exercise the dog is accustomed to.

The Beagle Harrier is not a suitable dog for people living in apartments. Of course the dog can be taken on long walks but they would be most happy if they will be allowed to roam unrestricted by a leash. A home in a suburban area with a well fenced yard would be a most suitable living arrangement for the dog.

The Beagle Harrier is a good choice for an owner who does not have much time to devote for the maintenance and care of the pet. Brushing or combing the coat once every few days would remove dead hair and maintain its good condition. The coat must be regularly groomed when the dog is shedding. Avoid bathing the dog very often as it will remove the natural oils that make the dogs coat weather resistant. Additionally, ears must be regularly checked to prevent infection.

The Beagle Harrier is still considered to be a rare dog these days. The breed is seldom seen outside of France. The name Beagle Harrier was taken for the progenitor of this breed – the Harrier and the Beagle.

The Beagle and the Harrier are both very ancient breeds of dogs. The Beagles origin dates back to the early 1300s and the Harrier is speculated to have existed in the 1200s. Both breeds are known to be excellent scenthounds.

There were two conflicting theories on the origin of the Beagle Harrier. One is that the breed has originated in France during the later part of 19th century. Baron Gerard Grandin had wanted to create a dog that would have the physical attributes of the Harrier and the outstanding hunting traits of the Beagle. He mated the Beagle with the Harrier and the progeny is the Beagle Harrier, a dog that has inherited the outstanding qualities of the parent breed. The Harrier Beagle has a well muscled compact body and is noted for its par excellence hunting ability.

The second theory states that this kind of crossbreeding between the Harrier and the Beagle is already a common and established practice in Britain. It was speculated that puppies resulting from this breeding were exported to France and gained recognition thru the efforts of Baron Gerard Grandin. Of course this theory was refuted by dog enthusiast in Britain who wanted to preserve the purity of the two breeds.

Dog experts gave more credence to the first theory, more so when Baron Gerard Grandin authored the first standard for the breed. The standard was recognized by the FCI in 1974. In 1987, the Beagle Harrier became a well established breed.

The Beagle Harrier is an excellent hunter of wild boar and deer, a specialization it has inherited from the Harrier as well as an outstanding hunter of foxes and deer, a trait handed down to the dog by the Beagle. In France these dogs can be seen hunting in packs. Because this breed has a mild temperament, very affectionate and friendly it has found a place in the heart of dog lovers as a devoted home companion.