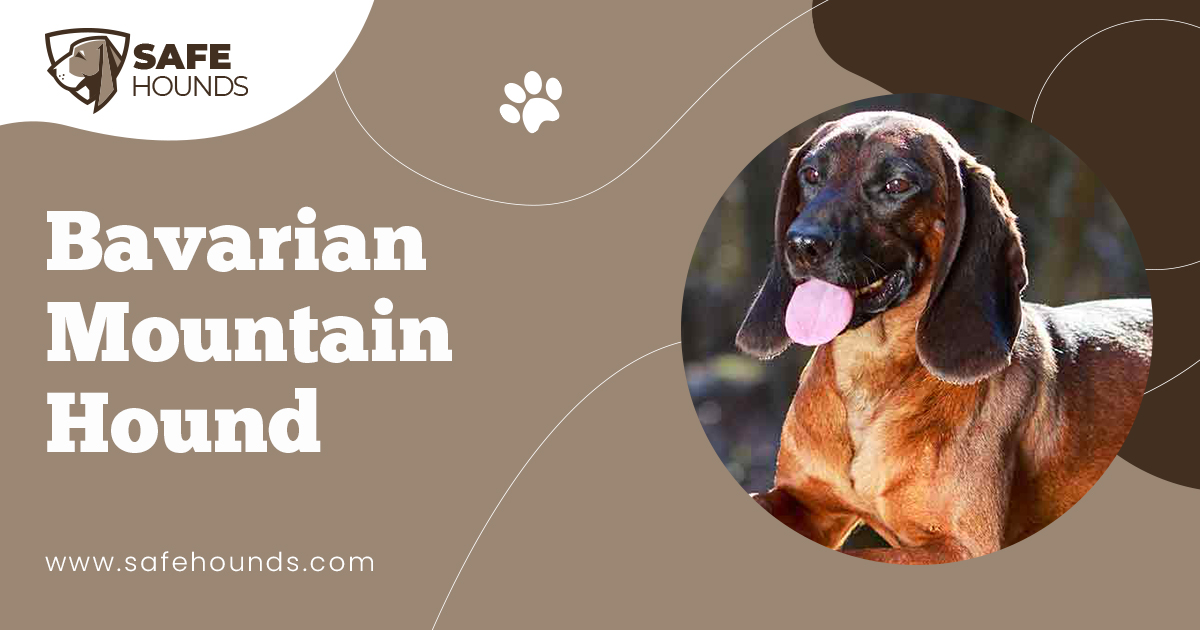 Bavarian Mountain Hound is a scent hound that originates from Germany. This breed that is also called the Bayrischer Gebirgsschweisshund was developed in 1870s, really quite a new breed if compared to other ancient breeds that are still existing today. This breed of dog was primarily developed to follow a blood trail. Schweisshund means bloodhound.

Wounded large game could travel miles, German hunters are bound by a code of ethics to find a shot game, whether the game is alive or dead. The wounded games flight may be marked only by a few drops of blood every hundred meters. This is where the highly specialized skill of the BMS will be needed. The wounded game has to be found and not left to endure a long slow painful death. This breed is capable of finding a trail gone cold. No doubt the dog can perform the task it was primarily developed for. There are other breeds used to track wounded animals but most can track fresh scent. The BMS is often brought in when other scenting dogs have failed as even a 48 hour old track can be found by this dog! Whats more the tenacious dog will never abandon the trail until the wounded animal is found.

This kind of hunting is usually done in the mountainous state of Bavaria in Germany. The BMS is a smaller and shorter version of its progenitor, the Hanover. Although rather small, the BMS is a par excellence tracker and hunter of the chamois deer. The size is a most valued asset as the dog is well adept at scaling the altitudes of the Bavarian Alps.

The Bavarian Mountain Hound was primarily developed for the purpose of tracking wounded game but an owner cant do wrong if the dog is trained. Training will hone the inherent tracking ability of the dog. Training is best started at an early age. A well trained BMS will report if the wounded game is found by barking and alerting the hunter to the location. The hound can also return to the hunter and through body language will report the location of the fallen game. Some hunters would attach a piece of leather to the collar of the dog. Once the wounded game is found, the leather will be retrieved by the jaws of the dog and brought to the hunter.

This breed is seldom seen in dog shows. Some have been developed into house companions. A Bavarian Mountain Hound is most trusted companion of licensed hunters and professional game wardens.

A Bavarian Mountain Hound is a medium sized muscular dog. The body is rectangular as body length is a bit longer than the height. This dog has a broad head, a broad muzzle and a black or dark red nose with well opened nostrils. Eyes that are large and round can be either light or dark brown but always have a clear and watchful expression. The set on high ears are broad, quite long, have rounded tips and hang close to the dogs head. The medium length tail is set on high, most often carried horizontally and at times slants downwards.

Dogs neck is strong and medium length, with loose skin on the throat. Back is supple and strong. The loin is rather short but very well muscled. A BMH has dense close fitting hair that is a bit rough to the touch. Hair on the head and ears are shorter and finer than the hair on the body legs and tail. The BMH is a beautiful breed made more eye-catching by the deep red, tan, reddish brown or clear fawn color of the hair.

A Bavarian Mountain Hound is a working dog. As these dogs are primarily developed to follow their noses they would be most happy to track. This is why even in Germany these dogs are mainly kept by hunters and game wardens. These dogs are seldom kept as pets. The BMH though can be developed into a wonderful house companions as they are calm and affectionate. However the owner should be able to provide the necessary exercise and mental stimulation required by this breed. This breed tend to be affectionate with the whole family, would do well with the children especially if raised with them while still young but the dog has the tendency to give his loyalty and affection to a single member of the family.

Blood tracking may be the specialization of this breed but the dog still has the inclination to follow interesting smells. A suitable living arrangement for this breed is one in the rural or suburban areas where a securely fenced yard will allow the dog to run, to roam and explore without the restriction of a leash. This opportunity to exercise will keep the dog alert as well as meet its physical needs.

This breed is not aggressive but neither is it shy. However, socialization and basic obedience training must be started while the dog is still young. This is to ensure that the dog will develop into a well mannered and obedient pet. Positive training methods should be reinforced with treats and a lot of praises. Harsh training methods can make the dog cower in fear. A BMH is an excellent tracking dog but a well socialized one will be a well mannered and obedient pet that would be a pleasure to own.

A Bavarian Mountain Hound is a black masked dog that has a short easy to care for hair. Being a working dog, this breed is more valued for its working ability rather than for its appearance. Short haired breeds that compete in dog shows would need high coat maintenance. This is not so with a BMH as a one a week combing or brushing with a firm bristle brush would keep the coat in good condition. However, similar to other breeds, this dog would need to have regular ear check up to avoid ear infection.

Hunting is considered to be one of the oldest activities of man. During the olden days, hunting is done to ensure the supply of food. The purpose of hunting has drastically changed. Nowadays, hunting has become a sporting activity. Hunting is now done for leisure. In Germany hunting is an old tradition that is filled with symbolisms. A felled deer will be laid on its right side and a small branch of oak or fir will be placed on its mouth. This is the last bite given by the hunter as a sign of respect for the deer. German hunters follow a code of ethics. It is the hunters obligation to find a shot game. A dead deer will not be a problem but a wounded one will be. Because of the adrenalin rush the wounded animal would sprint, cover many miles and leave a few drops of blood every hundred meters or so. The after the shot dog should have an exceptional scenting ability to follow the trail. Following a fresh trail or one that has gone cold is the expertise of the Bavarian Mountain Hound. Because of this ability this breed that is also known as the Bavarian Mountain Hound became a much sought after dog by German hunters.

The Schweisshunde (Leashhounds) and the Leithunde (Liam Hounds) are believed to have descended from the Bracken. The Bracken is the original hunting dog developed to hunt hare, rabbit, fox and boar in hills and low mountains. The dog is noted for its superb nose that can excellently follow cold trails of wounded animals. The Leithunde is noted for its ability for following natural cold scent while the Schweisshunde is noted for its ability to trail wounded game. Schweisshunde actually means bloodhound or a dog that follows a blood trail. Repeated breeding of these two breeds during the later part of the 18th century and the early 19th century resulted to the development of the Hanoverian Scenthound.

New hunting methods were introduced after the revolution in 1848. Hunters no longer need to hide and stalk a game as improved firearms were introduced. The Hanoverian Scenthound is ineffective to be an after shot dog as the dog is accustomed to working on a leash. Moreover, the Hanoverian is simply too heavy to follow a wounded game. This lead to the birth of the Bavarian Mountain Hound! This breed was developed in Bavaria, Germany.

Baron Karg-Bebenburg, in an attempt to create a medium sized dog that will be surefooted on the loose ground of the mountainous region mated the Hanoverian Scenthound with the smaller dog, the Tyrolean Scenthound. The Bavarian Mountain Hound was the result of the mating. Because of the dogs outstanding scenting ability it can follow wounded animals. The dog is rather small but it can still hold wounded animals at bay until the hunter arrive. The size of the dog is a valuable asset as it can easily scale rough terrain and mountainous altitude to trail the wounded game in heavy cover. As the breed became so popular the Bavarian Mountain Hound was established in Germany.