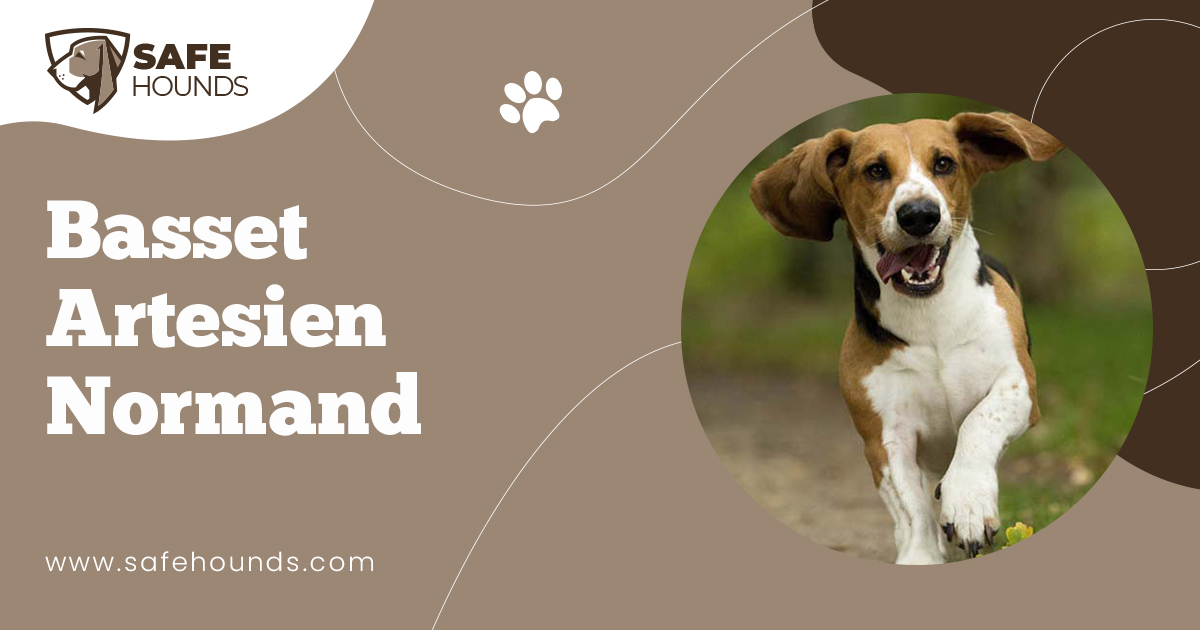 The Basset Artesien Normand is one of the six breeds of bassets that originated in France. This breed is noted to have been in existence since the 1600s. The basset in the breed name came from the French word bas which means dwarf or low on the ground. The Basset Artesien Normand has all the basset characteristics. This breed has a rather long body, one that is twice as the height. It has the typical droopy ears of a basset and large soulful eyes that give the dog an intelligent expression. These dogs that stand from 10 to 14 inches and have an average weigh of 32 pounds has a more delicate look than other breeds of bassets but it is an athletic dog and noted for its prowess in hunting badgers, foxes, rabbits and other small game. Ancestors of this breed were developed to hunt game under heavy and prickly undergrowth. This dog can go where other large hunting dogs cant. Because of its smaller size, the Basset Artesien Normand can follow the prey in its den.

Hunting is a most relished sport in France. However, hunting is only for the nobility. It was only after the French Revolution that the common people were allowed to hunt. The hunting privilege was given to ordinary citizens. These people though do not own large hunting dogs and horses. It is during this time that the basset hounds gained popularity. These small dogs are not too fast for the hunters on foot to follow. Moreover, the small dogs can easily hunt in areas with thick under growth. This breed is a courageous and tenacious hunter. The dog has a highly developed hunting instinct. These small dogs arte generally utilized to hunt small game but a Basset Artesien Normand would not baulk at hunting much larger wild boars.

The Basset Artesien Normand is the dwarfed version of dogs belonging to the hound family. This compact and well proportioned breed exudes the noble looks of its big Norman hound cousins although the BAN has a more delicate conformation. This breed has a longer than tall body length is twice as the height of the dog. This short legged breed has a wide and well supported back, a slightly tucked up loin and a long round chest with prominent sternum. The muscular neck is slightly dewlapped. The long tail is thick at the root and tapers progressively to the tip. The tail hangs down with the tip just touching the ground when the dog is at rest. When the dog is on the move, the tail is carried saber fashion. Short leg is a distinctive characteristic of bassets. The Basset Artesien Normand has short legs too but unlike other breeds of basset, the BANs legs are not overly crooked allowing the dog greater mobility.

A Basset Artesien Normand has a dome shaped head. The long ears are one of the most distinctive features of this breed. The ears that are set as low as possible are narrow at the base and curl inwards in corkscrew fashion. The pointed ears that reached the tip of the muzzle are supple and fine. Large oval shaped dark eyes give the dogs face a serious and calm expression. Large black nose has well opened nostrils. This breed has fine supple skin that is covered with short smooth hair. A Basset Artesien Normand can have a bicolored (orange and white) or a tricolors coat (orange, tan and white). The dog can also have a black blanket and circles of dark hair on the temples.

Basset Artesien Normand may be a dwarfed version of the Norman hound but its hunting prowess can never be doubted. This breed that has an excellent nose is noted for being an excellent worker as well. This hunting breed is a joy to work with as apart from the enthusiasm to hunt, the dog is also loyal and devoted to it master. This good natured pet makes a wonderful addition to the family as it is affectionate and gentle with the children. In France, these dogs are hunted in packs thus the BAN does not have a dog-aggressive temperament. A properly socialized BAN may tolerate other smaller pets of the family but because of a strong prey drive, the dog may give in to the inherent desire to chase other peoples smaller pets. This intelligent breed is noted for its obedient nature. Training a Basset Artesien Normand would not be a problem. Because of the size, this breed would be a suitable choice for people living in apartments. The dog is relatively inactive indoors. The BAN though is a hunting breed, a dog with moderately high exercise requirements. An owner must ensure that the daily exercise needs of the dog are met.

The Basset Artesien Normand is a low maintenance breed. The short smooth hair would be easy to groom. A rubber brush used on the coat twice or three times a week will remove dead hair. Bathing and shampooing must be done only when necessary. This breed though has long droopy ears that would need to be cleaned regularly to prevent infection. Nails must be clipped regularly as well.

Bassets are short legged hound type dogs. These dwarfed versions of larger dogs are scent hounds. Their excellent sense of smell makes their tracking abilities comparable to bloodhounds. Basset was derived from bas, a French word that means low on the ground. These dogs were selectively bred by the friars of the French Abbey of Saint Hubert with the objective of producing a dog type that is slower and shorter, a dog that can be easily followed by a hunter on foot. The short crooked legs which are considered to be genetic disorders were purposely introduced into the dogs bloodline. Way back in 1585, the term basset refers to any dog that is low on the ground and generally used by hunters to hunt badgers and other small game. These short dogs have the advantage over larger dogs as they can hunt under prickly shrubs and they can follow the prey into their lairs. These short legged dogs that are generically called Norman Bassets are prevalent in northern France. The Basset Artesien Normand is one of the six basset hounds of France that was developed from these ancient dwarfed dogs.

The Basset Artesien Normand is a bred that looks like a Basset Hound although it is rather lighter in weight. The existence of this breed dates back to the 1600. Short legged dogs that are common in Artois (Artesien) were mentioned in the 17th century memoirs of the Frenchman Fauilloux. At the end of the 19th century when breed identification became a worldwide trend, distinct types of Baset Artesien Normand started to emerge. One type of Norman Basset was developed by Count Le Coulteux de Canteleu and the other type was developed by Louis Lane. The Counts breeding program is centered on developing the hunting attributes of the breed rather than the physical appearance. The dogs that were developed under his breeding program are strong bodied and straight legged dogs. The head type and the small flat ears are similar to that of the Chien d Artois. Louis Lanes breeding program gives emphasis on developing a dog type that will maintain the classic appearance. Dogs that were developed in Rouen have aesthetically admirable appearance. The domed head with the large drooping ears give the dog a noble appearance. However, because of extremely curved forelegs, Lanes dogs are less agile and others are even almost disabled.

Modern day bassets were developed from the dogs created by Count le Coulteux de Canteleu and Louis Lane. Breeders have taken to crossing the two types to get the admirable qualities of the dogs. Leon Verrier spearheaded the creation of a new breed. Dogs that were developed in his Verrier kennels and commonly referred to as Artois Bassets (Bassets d Artois) have taken the lead in conformation shows. The first standard for the breed was written in 1898. This breed, like many others has suffered tremendously during the war years. World War 1 has wiped out the Verrier kennels but Leon Verrier has continued to be influential in the development of the Artois Bassets. At his leadership, the name of the breed was changed to Basset Artesien Normand in 1927. After World War 11 only a few specimens of the breed were left. The Basset Artesien Normand was saved from extinction by dedicated breed enthusiasts. The revival of the breed was spearheaded by Leparoux de Combre des Mainet Loire and in 1995 the Basset Artesien Normand was finally recognized by the United Kenner Club.