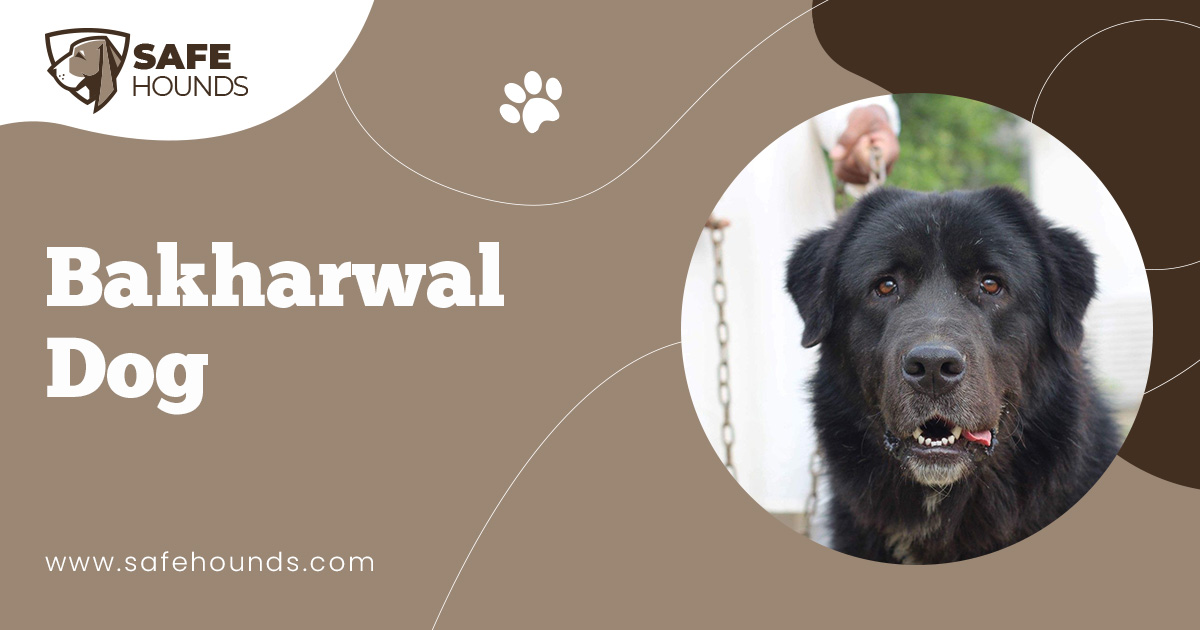 The Bakharwal Dog is one of the oldest breeds of herding dogs in Central Asia. These strong boned, deep chested dogs with black and tan colored coats have existed in the Pir Panjal mountain ranges of Indias Kashmir Himalayas for thousands of years. The progenitors of this herding species is unknown although the breed is believed to be related to the ancient dogs of Central Asia particularly the Tibetan Mastiff. The masters of this breed, the nomadic Gujjar tribes believe otherwise. These dogs were utilized by these pastoral people for centuries and they believe that the Bakharwal Dogs are much older than the breeds considered to be their ancestors. Of course this belief was not scientifically proven.

The Bakharwal Dogs are rugged dogs noted for their excellent abilities to herd and to protect the livestock. These courageous dogs provide protection not only to the herds of sheep and goats but also to the tribes settlement. These serious and resilient workers are famous for their ferociousness. They are protective of the animals under their care, they are protective of their masters as well. The Bakharwal is a hardy breed. The very thick and dense double coat provides the dog protection against the harsh weather conditions of the area. These courageous and ferocious dogs are very capable of protecting their animals from predators. Surprisingly, these dogs subsist only on bread, milk and milk products. These dogs totally avoid eating meat even those cooked by their masters. These dogs would prefer to be hungry rather than attack and eat the animals under its care.

This breed is on the brink of extinction. The rapid decline in breed population can be attributed to several factors. The rebellions in the higher regions of India caused hundreds of dogs to be killed. Bakharwal Dogs were used by the security force personnel to catch the militants. Thus the anti-national elements have taken to killing the dogs. Decline in population was not helped by the harsh living conditions of the breed. Large numbers of dogs die every year due to rabies and other infections. Breed population is hard to replenish as a Bakharwal bitch is known to whelp 1 to three puppies only once a year. This notable type of herding dog is highly valued for its work ethics. Large numbers of Bakharwal dogs are stolen and smuggled out of India further decreasing breed population.

The Bakharwal Dog is an ancient working breed whose stature and working abilities were developed in the varied terrains and harsh climatic conditions of the Pir Panjal mountain ranges of India. These agile and fleet footed dogs are highly valued guardians of livestock that protects the sheep and the goats from wolves and other predators. The Bakharwal Dog comes in a variety of sizes. These dogs normally measures 24 inches at the withers although some specimens can be as tall as 30 inches. This is a strong boned breed. A Bakharwal Dog has a powerful body. The dog has a muscular chest and a straight topline. The dog has the large head typical to a molosser. The powerful neck blends smoothly to the broad well muscled shoulders. This is a double coated breed. The undercoat is dense and the flat lying outer coat is very thick. The coat provides the dog with protection from the harsh mountain climate. The Bakharwal Dog is speculated to be related to other mastiff type dogs of Central Asia because of the build and the coat coloring. A black and tan colored coat is most common for this breed although some specimens are noted to have tricolored coats. Piebald Bakharwal Dogs are also found.

The Bakharwal dog is highly valued for being a serious worker an excellent breed of herding dog. This breed has the strength, the courage and the ferociousness of a Jaguar. When it comes to protecting the animals under it care, this dog will not be intimidated by larger predators. This dog protects the sheep and the goats from wolves but these ferocious dogs would fight tigers, bear, and lions as well as any other predators. These serious workers make suitable companions too. A Bakharwal dog is loyal, affectionate and very protective of its masters. These dogs form a strong bond with its people. The dog is known to be good with children and tolerates other non-dog pets. These are intelligent dogs but because their independent nature was honed by time, these dogs can be quite difficult to obedience train. When herding, these dogs would act independently. The masters command would not be necessary as the dog would move with alacrity when there is a necessity to protect its charges. As mentioned, this dog would make a suitable home companion but a prospective owner must have what it takes to be the dogs leader otherwise this dog will take advantage and be a hard to handle pet. A Bakharwal Dog is a working dog. As such it is expected to have high exercise requirements that can not be met if the dog is to live in apartments. A home with a large yard would make sure that the dog is given the opportunities to run, to play and to let off pent up energies.

The Bakharwal is a low maintenance breed. The short coat would need very minimal care. Brushing the coat once or twice every week would be sufficient to maintain its good condition.

The Bakharwal Dog is considered to be the rarest among the rare breeds of herding dogs. This dog is most prevalent in Kashmir Himalayas Pir Panjal mountain ranges. For thousands of years this breed of dog has existed with the Guijjar nomadic tribes. These are nomadic pastoral people. For centuries, these shepherds and herders have existed in the north western part of India. It follows that these cattle breeders and milkmen will need a working breed of dog that will be used as livestock guardian. The Guijjar tribes have the Bakharwal Dogs. These dogs were specifically bred to be livestock guardians and settlement protectors. The Bakharwal Dogs are resilient dogs that are serious in performing their tasks. These dogs are commonly seen with large herds of sheep and goats.

It was believed that the existence of this breed dates back about 300 years. The precise origin of this breed is unknown. As with other ancient breeds whose origins are not well documented, the origin of the Bakharwal Dog was also lost in the mist of time. It was speculated that this ancient working breed has descended from other ancient breeds that have existed in Central Asia. This breed belongs to the leaner types of Asian Molossos. The Bakharwal Dog is believed to be related to the Hyrcanian Mastiff, the Sylvan, the Molossis tis Epirou, the Tuvan Sheepdog and the Sage Mazandarami. This is due to the fact that the Bakharwal Dog has the physical build and the black and tan coloring of the aforementioned breeds. This theory though is debatable as the Gujjar herdsmen claim the breed to be a much older one.

The Bakharwal Dog is a serious worker and considered to be the most resilient species of herding dog in Indias Himalayas. This breed is a most able helper of the Gujjar tribes during tribal migration. The dog is commonly seen herding large herds of sheep and goats in hilly and remote areas. Sadly, this herding dog is on the brink of extinction. A survey conducted by Indias Tribal Research and Cultural foundation on this indigenous dog of Kashmir and Jammu disclosed that only a few hundreds of these dogs are in existence. Since the pastoral tribes of Gujjar and Bakerwal have relinquished the nomadic life and settled in various places, the number of Bakharwal Dogs started to decline. The insurgency in the higher regions of India has caused hundreds of dogs to be killed. The remaining dogs exist in the most difficult conditions. If nothing is done to preserve the breed it is possible that the Bakharwal Dog will be lost to the world in the next few decades.