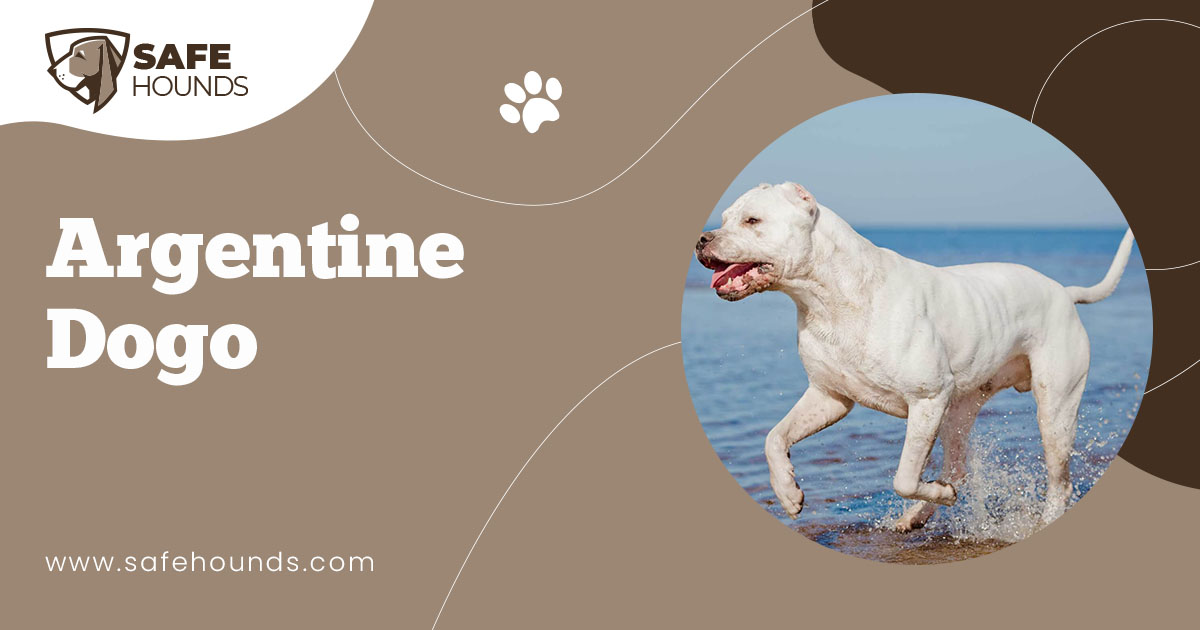 Argentine Dogo, also known as the Argentine dog and the Argentine Mastiff is the one and only pure breed dog that originated from Cordova Argentina. Argentine Dogo is a large game hunting dog that can look so powerful and ferocious and yet can be a so friendly. In spite of the excellent muscle structure, the thundering bark and the powerful look, an Argentine Dogo would love to be constantly petted, they need physical contact so much so that they would sprawl on your lap, lean against your leg and would not lie at your feet but on your feet. Argentine Dogos are wonderful house pets as the owners would enjoy playing with this large fierce looking but lovable dog. These dogs are known to be quiet inside the house but would be vivacious and playful when let out. Owner and pet would enjoy a playful romp in the yard.

Due to the dogs hound heritage, it possesses a strong prey urge. Cats and other small pets therefore, should not be kept in close proximity unless the dog and the other pets were raised together. Argentine Dogos are known to be strong willed and independent. Some are even obstinate and domineering.

An owner would need to be confident and consistently show the dog who is the boss. Some people are intimidated by its strength and temperament. There are some areas where these dogs are banned not because of its intimidating looks but because the breed was once used in organized dog fights. Really a sad thing as it was actually the owners who were responsible for this occurrence and not the breed.

An Argentine Dogo gives the impression of great strength and power with its muscular heavily boned body and strong neck that holds a massive head with a wide domed skull. The dog however, is graceful. A running Argentine Dogo is a pretty sight as you would be enthralled by the play of muscles in motion. The short, thick and glossy dog coat that only comes in white and has no undercoat. Although the coat is pretty short, Argentine Dogos shed a lot. Short coarse hair would come off and cling to the hands when the dog is petted.

The dog would usually have brown or hazel deep set eyes. What is notable is the fact that the dog would often look at you with an intense and intelligent expression. The dogs skin at the neck is loose. This is to protect the dog from injuries while hunting. Some owners would dock the ears but normally the dog has cropped ears that would stand erect close to the skull. The short thick tail that narrows to a point is carried high when the dog is moving.

A female Argentine Dogo has a slightly longer body than a male dog. The minimum height of the male dog is 24 inches while a female dog is 23½ inches.

An Argentine Dogo would be happy in a soft couch in an apartment dwelling provided the owner would regularly take the dog for physical exercise not only to maintain the muscle structure but most importantly to avoid boredom. Argentine Dogos being hunting dogs are naturally energetic. Exercise and other physical activities would release the dogs energies and fulfill its need to hunt. Be wary of bored dogs as they can resort to destructive chewing.

Argentine Dogos are intelligent dogs. They can be easily trained. They are basically playful with the whole family and good with the children but can be very reserve with strangers. The slightest signal of danger would make this breed act at once to save the family. Early socialization and obedience training is therefore necessary.

Unlike other dogs that need daily grooming because of their long coats of hair, an Argentine Dogo needs minimum grooming. The short coat would need to be brushed once a week with a rubber curry to keep the coat in good condition as well as remove loose hairs. This is one breed of dog that has no doggy smell. Nevertheless, bathing with a shampoo specially made for white coats is suggested. Aside from the regular cleaning of ears and teeth, attention must be given on the nails of the dogs. The nails of an Argentine Dogo have a tendency to grow very fast and as such would need to be regularly trimmed.

The Dogo Argentino dog breed originated from the province of Cordova Argentina. History has it that the breed was developed in 1925 by Antonio Nores Martinez, a barely 18 year old lad that was helped by his younger brother Agustin. Antonio and Agustin are both avid hunters and dog lovers. Antonio have envisioned breeding a dog that will have great energy and endurance, qualities of a good hunter and at the same time a dog that will be both fierce and loyal to be a guard dog and a pet of the family.

The fighting dog of Cordova, a breed that consist of Mastiff, Bull terrier, Boxer and English bulldog was used as the foundation of the breed that will be created. Although the fighting dog of Cordova is a fierce fighter and a skilled and dexterous hunter, the dog still does not have all the qualities Antonio is looking for in an ideal hunting dog. Antonio developed the Argentine Dogo by cross breeding the fighting dog of Cordova with ten other breeds. The new breed is hoped to eliminate the fighting enthusiasm of the dog while enhancing the hunting instinct. The Pointer was chosen for its sharp sense of smell that will be important in a hunt, the Boxer for its vitality and gentleness, the Great Dane for its impressive size, the Bull terrier for its ferociousness, the Bulldog for its physique, the Irish wolfhound for its prowess of stalking wild game, the Dogue de Bordeaux for its powerful jaws, the Great Pyrenees for its beautiful white coat and the Spanish mastiff would contribute its power.

The breeding would be an impossible feat as both Antonio and Agustin are still in school but they were helped by their father who hired a kennel and shouldered some of the expenses. In 1928, Antonio wrote the first standard of the breed and the Argentine Dogo was formally born. Unfortunately, Antonio was killed while hunting. Agustin took over, worked on the new breed, moved the breeding headquarters from Cordova to Southern Argentina. Agustin Nores Martinez later on became Argentinas ambassador to Canada. He took the opportunity to spread Argentine Dogos in all the places he visited. The Argentine Dogos became a legend as people in Argentina as well as the neighboring countries used the dog to hunt wild boar and puma.

The Argentine Dogo was favored by people who have an unaccountable liking for dog fighting. Because of this, the breed has gained a negative reputation. The dog was one of the breeds that were banned by the Dangerous Dog Act of 1991.

The Argentine Dogo posses all the qualities of its ancestors, fierce, enduring, fast and powerful making it and excellent hunting dog, but the dog is also playful, gentle and protective of its family a loving family pet just like the one Antonio Nores Martinez have envisioned.