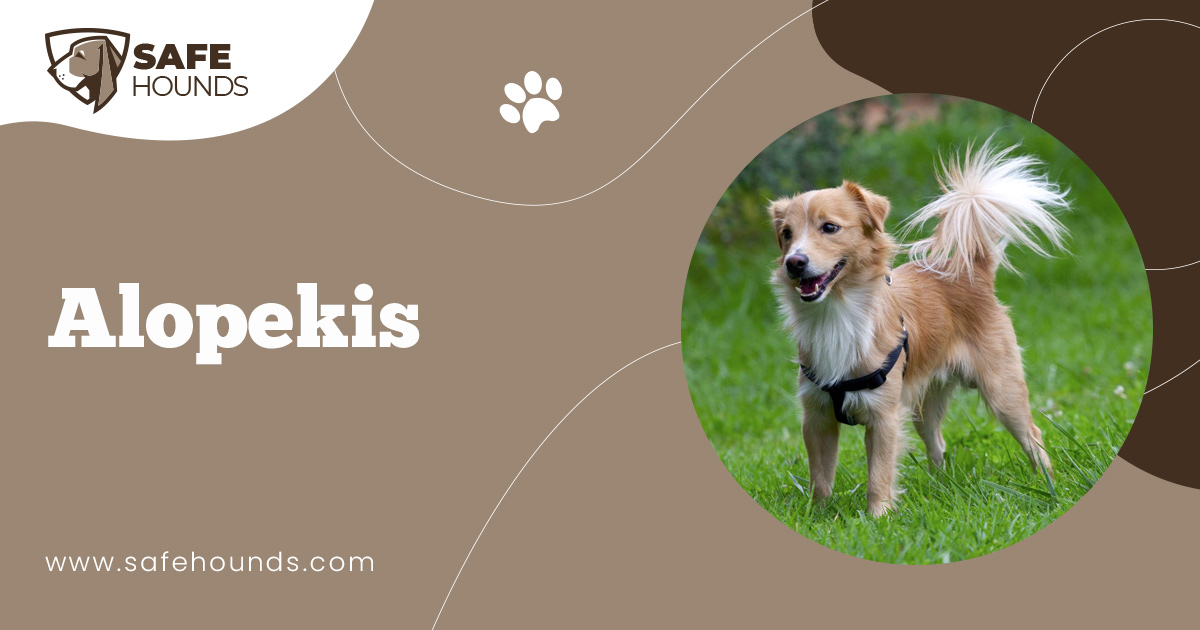 An Alopekis is a small dog with fox-like features. This dog the wedge shaped head and triangular pricked ears that are typical to a fox. This small breed has an elegantly curved tail and a beautiful glossy double coat that comes in different colors. This breed has always been the valued pet and companion of the Greek people even from the ancient times and up to these days. For centuries, these versatile dogs have been utilized in farms as ratters and all around farm dogs. An Alopekis is a terror when it comes to vermin hunting. This flock attendant is an enthusiastic worker. This dog will herd even a few heads of geese, will sleep in the hen house, alert and always on the lookout for foxes. Small as the dog may be but it will guard the cattle, the goats and other livestock in the farm. The dog will run alongside donkeys and horses in the same manner that it will escort the children to school. These dogs have roamed the streets of Greece, belonging to no one and untrained by anyone but always willing to serve and forever ready to guard and to protect people and property. The Alopekis is a highly versatile breed. It can live in rural areas as well as in big cities. The dog can be an indolent and pampered lap dog but it can also be the excellent companion of an active owner. An Alopekis is always ready for action. The dog may be small but it is athletic and exhibits fast reflexes. The dog can cover long distances without tiring and can be depended on to easily find hares and small game for the stew pot. The Greek people have never been wrong in acknowledging the dog as a multum in parvo. An Alopekis is truly a great big dog in a small package!

The Alopekis is one of the breeds under the umbrella of Small Greek House Dogs. These dogs were once considered to be a different type of the same breed of stray dogs that are commonly seen in the streets of Greece. However, the Alopekis was established to be of a different breed with distinct features. A separate standard was later on written for this breed. The Alopekis is a longer than tall breed. This breeds medium length strong neck blends smoothly onto the muscular withers. The chest is broad and deep, the well extended ribcage is well sprung. The strong back curves gracefully into the broad muscular loin. An Alopekis has straight forelegs and well rounded hind quarters. Elliptical feet have strong nails and thick pads. This breeds tail is long, easily reaching the hock joints. The tail forms a sickle and carried high. In motion, the tail is very mobile.

This breed has wedge-shaped head. The broad skull is slightly domed. The stop is light but easily discernible. The muzzle tapers to a broad nose with well opened nostrils. This breed has strong jaws, regular teeth with scissor bite and taut lips. Almond shape or round bright eyes with well fitting eyelids have an intelligent expression. The color of the eyes is in accordance with the coat color. Large triangular shaped ears have slightly rounded ears. Erect ears are very mobile. The Alopekis is a double coated breed. The good quality coat has a hard but smooth outer coat and a dense soft under coat. The hair is thick and longer on the neck. Longer hair forms a brush on the tail and breaches on the rear side of the thighs. The forelegs have feathering as well. The short to medium length hair may be flat or slightly wavy but both hair types have a natural silky sheen. The coat can be of any color and color combination.

The Alopekis is a dog with a happy temperament. This breed is by nature playful, lively and outgoing. It also has the canine eagerness to please. These intelligent dogs are very easy to train as they are noted for their obedient personality. These dogs are very friendly but they make excellent watchdogs because of a well developed protective instinct. It makes a devoted and faithful companion of the family and forms a legendary attachment with the children. Aside from its beautiful and ideal manners, an Alopekis is a versatile dog as well. This breed would do well in an apartment, in a farm or in a house in the country or in the city as long as it is given the chance to play off lead.

A well cared for Alopekis will live for as long as 16 years. This is a fairly healthy breed with no known genetic health concerns. These dogs are not fussy eaters, they can survive on table scraps and still remain healthy. Extensive grooming is not needed for this breed as well. The naturally shiny coat would benefit from being combed or brushed every now and then. The dog is very active and playful. The longish hair can be soiled with dirt and mud. The dog can be dry shampooed. Frequent bathing is not advisable as it would remove the natural oils of the skin.

Alopekis have always been around in Greece. Along with the other small dogs that are commonly referred to as Small Greek House Dogs, these dogs are seen everywhere in towns, in villages and in cities. These dogs are actually considered as strays! Ancestors of this breed of small dogs have existed in Greece with the Pelasgoi people during the proto-hellenic era. Documentations have proven the existence of this breed in the ancient times. The size of todays dog varies from the size of the dogs found in settlements in Thessaly during the Paleolithic age but the type remains the same. These dogs were referred to as Alopecis by the ancient Greeks. The name means small and fox-like. An engraving in a clay vase found in Thessaly circa 3000 BC depicts the small dog. The dog was also portrayed in other ancient Greek sculptures. A marble statue displayed in the Museum of Artemis Temple in Vravron, Attica shows a young boy and a small dog. The accurate detail of the dog identifies it to be an Alopekis.

Greek streets are literally littered with stray dogs. It was once considered that the Alopekis and another stray, the Small Greek Domestic Dog (Melitio Kinido) are of the same breed. Both breeds are lumped together as Small Greek House Dogs. However, this idea was changed and both dogs were considered to be of different breeds and provisional standards were written for both breeds. The Alopekis and the Militio Kinido are prevalent in Greece although the latter exist in greater numbers.

The Alopekis is a faithful and devoted dog but more than being a companion, these dogs have other utilizations as well. An Alopekis is a watchdog that is protective of its family and the familys properties. The dog is a flock attendant, a ratter, and an all around farm dog that is capable of performing varied tasks. These dogs were valued by ancient Greeks in the same way that they are valued by Greeks today. People though are not aware of the ancestry of these small dogs. Patriotic Cynophiles have formed a group in the 80s to research these small dogs. Alopekis, the dogs that in one time belonged to no one are now carefully and systematically bred. This energetic and courageous dog that is highly adaptable and shows an innate eagerness to please its masters has found a way to the hearts of dogs lovers and has become wonderful additions to the family.